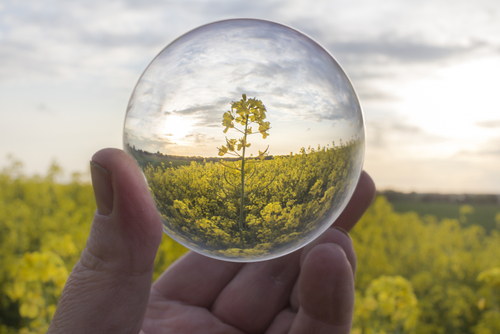 Researchers have found seven complete flower specimens dating back 100 million years ago that have been fossilized on a Burmese amber tree.

George Poinar Jr., a professor emeritus in Oregon State University’s College of Science, said the flowers range from 3.4 to 5 millimeters in diameter and were likely dislodged into the tree in Myanmar by dinosaurs roaming through a pine forest.

The new species was named Tropidogyne pentaptera after the Greek words penta—which means five—and pteron— which means wing— due to the flower’s five firm, spreading sepals.

“The amber preserved the floral parts so well that they look like they were just picked from the garden,” Poinar said in a statement. “Dinosaurs may have knocked the branches that dropped the flowers into resin deposits on the bark of an araucaria tree, which is thought to have produced the resin that fossilized into the amber.

“Araucaria trees are related to kauri pines found today in New Zealand and Australia and kauri pines produce a special resin that resists weathering,” he added.

Previously the researchers studied Burmese amber that contained another species in the same angiosperm genus—Tropidogyne pikei.

“The new species has spreading, veiny sepals, a nectar disc and a ribbed inferior ovary like T. pikei,” Poinar said. “But it’s different in that it’s bicarpellate, with two elongated and slender styles and the ribs of its inferior ovary don’t have darkly pigmented terminal glands like T. pikei.”

According to Poinar, the new tree was likely a rainforest tree.

“In their general shape and venation pattern, the fossil flowers closely resemble those of the genus Ceratopetalum that occur in Australia and Papua-New Guinea,” he said. “One extant species is C. gummiferum, which is known as the New South Wales Christmas bush because its five sepals turn bright reddish pink close to Christmas.”

There also may be some connection between the mid-Cretaceous Tropidogyne from Myanmar and C. apetalum—another new species with no petals and only sepals found in Australia.

“Probably the amber site in Myanmar was part of Greater India that separated from the southern hemisphere, the supercontinent Gondwanaland, and drifted to southern Asia,” Poinar said. “Malaysia, including Burma, was formed during the Paleozoic and Mesozoic eras by subduction of terranes that successfully separated and then moved northward by continental drift.”

The study was published in Palaeodiversity.