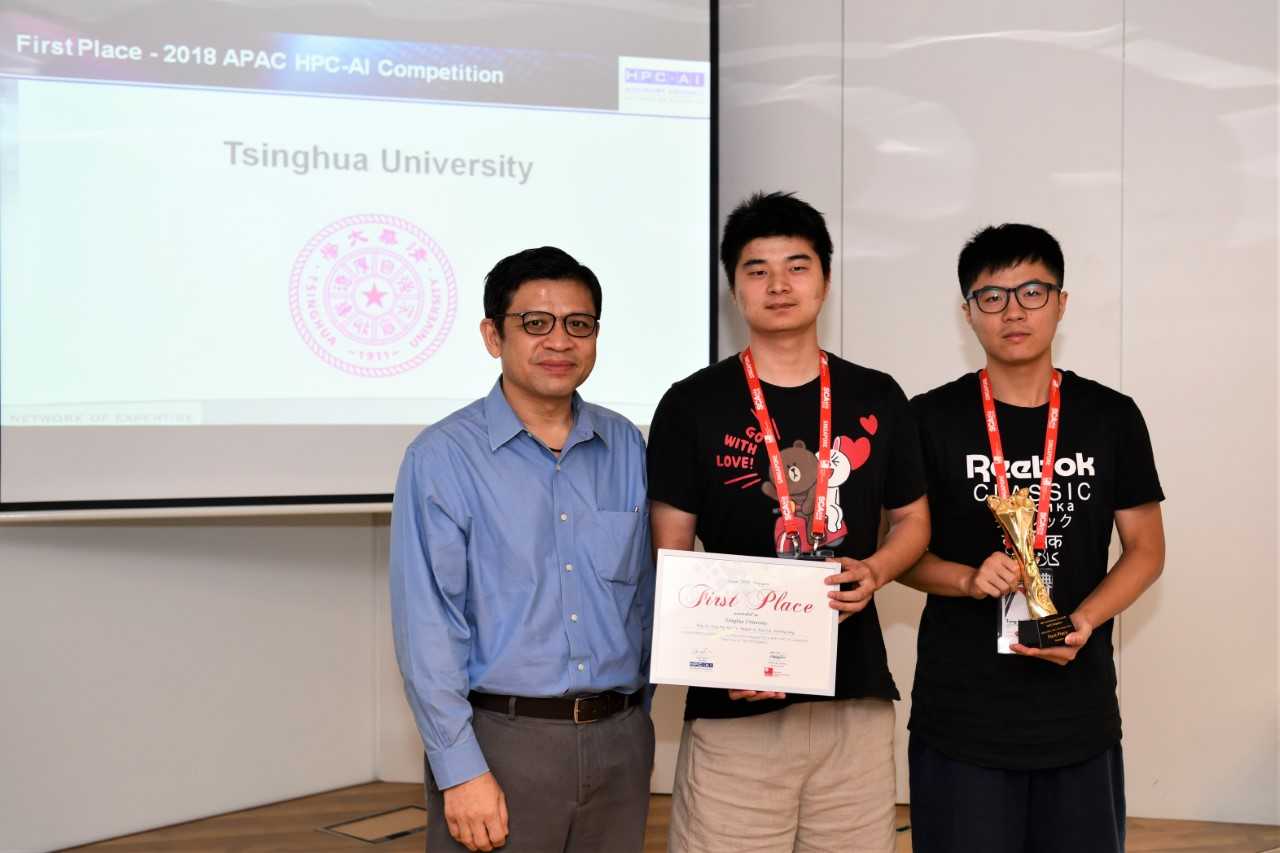 Guest-of-honor with the winning team from Tsinghua University. (Image: Courtesy of the HPC-AI Advisory Council)

The competition kicked off at Supercomputing Asia 2018, NSCC Singapore’s flagship HPC annual conference, on the 27th of March, 2018 by Dr. Janil Puthucheary, the then Senior Minister of State for Communications and Education, and ended on the 13th of August, 2018. The competition saw intense, but healthy, rivalry among 18 university teams from seven countries and regions, and yielded winning solutions for improving the real-life accuracy of weather forecasts and image recognition. Tasked with demonstrating the highest performance on a range of complex HPC and AI applications, Mainland China’s Tsinghua University team was awarded First Place. Second and Third Place were awarded to the two Taiwanese teams from National Cheng Kung University.

The two primary focuses of the competition were High Performance Computing (HPC) and Artificial Intelligence (AI) applications. For the HPC applications, teams were challenged to achieve the highest simulation speed of the CONUS 2.5km benchmark using the Weather Research and Forecasting (WRF) Model, a very popular weather forecast tool used in by weather research institutes around the world. This application reduces forecasting time while maintaining its level of precision. For AI applications, the competition focused on multi-node distributed training of the ImageNet dataset. Participating teams were challenged to optimise the AI framework and neural network architecture. This is aligned with what the world is now doing in AI, turning technology into real-life applications including smart city and security-related initiatives.

To collect the winner’s trophy, the top winning team from Mainland China’s Tsinghua University had to analyse, evaluate and optimise the performance of multiple nodes, and each node with multiple GPUs, over an intense five-month period. The top winning team also gets to participate in the 2019 International HPC-ISC Student Cluster Competition, to be held in Germany, June 2019.

The second and third trophy-winning teams were the two teams represented by Taiwan‘s National Cheng Kung University. The fight to the wire was very tight, with all winning teams demonstrating a high level of performance. To further encourage the teams throughout the competition, a special prize for creativity was announced. Teams submitted a video of their five-month journey and were graded based on the video’s level of creativity. The special prize-winning team was from Thailand’sThammasat University.

Chief Judge and Chairman of the HPC Advisory Council Gilad Shainer said, “The judges were really impressed with the high levels of skill and strategy that participants evidenced throughout the competition period. This made the judging committee’s job that much harder, as each team proved to be an equal match with one another. Ultimately, what impressed us most was how such a student competition could yield results to improve the lives of ordinary individuals the world over.The competition proved once again that the availability of HPC resources can empower universities, research laboratories and commercial vendors to develop tomorrow’s products and services, from safer cars and airplanes, to more accurate weather and storm predictions, as well as finding new cures. Since HPC and AI applications share the same underlying technologies and infrastructures, new developments in HPC are being adopted immediately for AI, and vice versa, and could also extend to commercial areas including security and smart nation initiatives.”

Shainer added, “We commend all the teams for their tremendous efforts and achievements demonstrated throughout the months of this competition, and extend our sincere appreciation to NSCC Singapore for their partnership and managing this important region-wide competition. We also thank the competition committee for its support of the competition throughout. It’s an incredible opportunity to contribute to the development of the core knowledge and critical skills for the region’s new generation of HPC and AI researchers, scientists and professionals, and the council’s mission in continuous outreach and education.”

NSCC Singapore’s Chief Executive Tan Tin Wee shared, “If you think that supercomputing competitions are but an exercise conducted in an ivory tower, offering no practical benefits to mankind – think again. This competition supports NSCC Singapore’s mission to use HPC to power innovation and champion Asia as a regional supercomputing centre. The winning solutions show clearly how supercomputing can align research, university work and commercial considerations to drive innovation that benefits all. It has been our privilege to be the co-organiser of this event.”