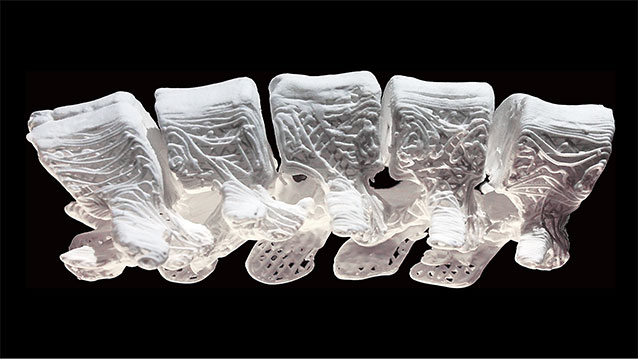 A hyperelastic bone in the shape of a section of the human spine, 3-D printed using an ink developed at Northwestern University. Credit: Adam E. Jakus

A new method for mending injuries resulting from fractures or similar damage could be on the horizon.

This hyper-elastic material is a mix of a biodegradable, biocompatible polymer found in different medical applications like sutures along with containing an element of hydroxyapatite, which is natural calcium mineral found in human bones. This combination makes this material robust and porous at the nano, micro, and macro levels, per the university’s announcement.

“Porosity is huge when it comes to tissue regeneration, because you want cells and blood vessels to infiltrate the scaffold,” said Northwestern University assistant materials science and engineering professor and one of the study’s authors Ramille Shah, Ph.D., in a statement.

“Our 3D structure has different levels of porosity that is advantageous for its physical and biological properties,” she added.

Various experiments had shown this bone could easily withstand being cut, rolled, folded, or pressed, wrote The Verge. Inserting human stem cells into a different number of scaffolds derived from the bone demonstrated that the cells could easily form in a matter of weeks.

Also, testing the substance out in simulated surgical situations had shown the bone could fuse two vertebrae together in a rat’s spine as well as replace a portion of unhealthy skull tissue in a rhesus monkey. It underwent a complete integration with host tissue without raising any safety issues.

Children suffering from bone defects would benefit the most from this invention. The material’s hyperelastic component would allow for easy customization since the traditional metallic implant don’t accommodate a pediatric patient’s growth.

Still, the team needs to replicate these findings in larger-scale animal studies before moving on to humans.

The research was published in the journal Science Translational Medicine. You can watch a video of the scientists discussing their work below in a video posted by Science Magazine.