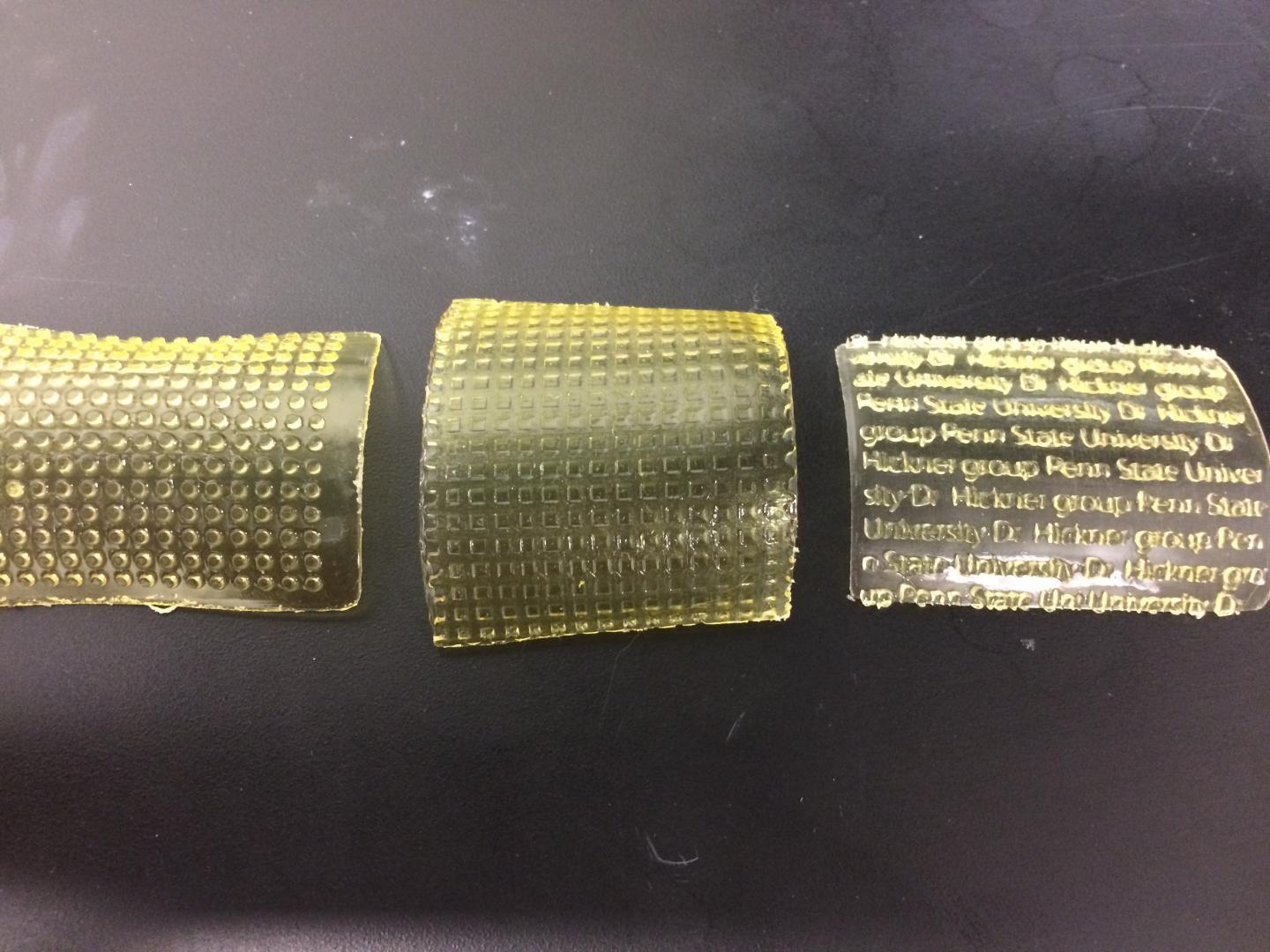 A new type of 3-D printing will make it possible for the first time to rapidly prototype and test polymer membranes that are patterned for improved performance, according to Penn State researchers.

Ion exchange membranes are used in many types of energy applications, such as fuel cells and certain batteries, as well as in water purification, desalination, removal of heavy metals and food processing. Most of these membranes are thin, flat sheets similar to the plastic wrap in your kitchen drawer. However, recent work has shown that by creating 3-D patterns on top of the 2-D membrane surface, interesting hydrodynamic properties emerge that can improve ion transport or mitigate fouling, a serious problem in many membrane applications.

Currently, making these patterned membranes, also called profiled membranes, involves a laborious process of etching a silicon mold with the desired pattern, pouring in the polymer and waiting until it hardens. The process is both time-consuming and expensive, and results in a single pattern type.

“We thought if we could use 3-D printing to fabricate our custom-synthesized ion exchange membranes, we could make any sort of pattern and we could make it quickly,” says Michael Hickner, associate professor of materials science and engineering, Penn State.

In a paper published online today in the American Chemical Society’s journal ACS Applied Materials and Interfaces, Hickner’s team describes the development of a custom 3-D photolithographic printing process similar in concept to a current 3-D process called stereolithography. The team developed a photocurable mixture of ionic polymers and exposed the mixture under a light projector to harden the base layer. They then added more polymer to the base layer and projected a pattern on the new material to selectively harden the surface. The surface pattern increases the conductivity of the membrane by as much as a factor of two or three.

“Membranes act like a resistor in a battery or fuel cell,” says Hickner, who is also a member of the Materials Research Institute. “If you can lower the resistance by a factor of two or three, you’ve really got something useful.”

The paper’s lead author, Jiho Seo, a Ph.D. candidate in materials science and engineering , added, “While surface-patterned membranes have been studied previously, this is the first 3-D printed example of these structures and the first model that really explains the resistance decrease in a quantitative way. A simple parallel resistance model describes the effect of the pattern on lowering the resistance of these new membranes. This insight gives us a design tool to continue to innovate and create new patterns for further improvements along with changing the intrinsic chemistry of the material.”

The team will continue to optimize the geometry and chemistry of the membranes they print, as well as learn to print new materials, both for membranes and beyond, that have never been printed heretofore.

“We want to bridge the fundamental chemistry and materials science that we do with the engineering and rapid design iterations that the 3-D printing industry is really good at,” Hickner concludes.