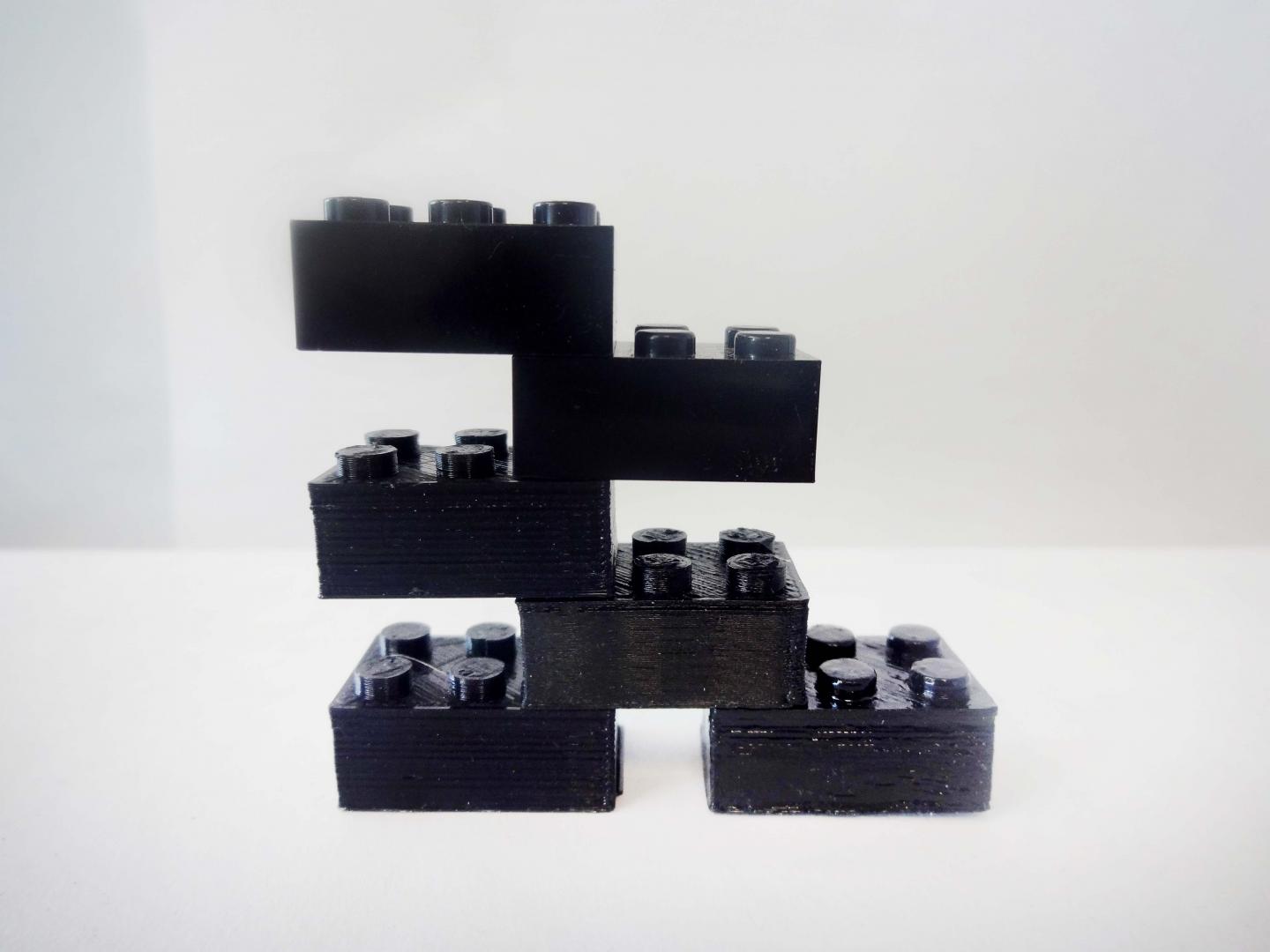 Each plastic building block is made of a different plastic and process; 3-D printing has the potential to disrupt conventional toy production, making it cheaper to make toys at home. Credit: Joshua Pearce

Cheap, plastic toys–no manufacturer necessary. The 2020 toy and game market is projected to be $135 billion, and 3-D printing brings those profits home.

People have scoffed that 3-D printers are simply toys themselves. But they probably didn’t realize how much money is made off playthings. Do-it-yourself (DIY) manufacturing–making goods at home with a 3-D printer using open source designs from a free online repository–has a multimillion-dollar impact on the overall toy industry.

A team of engineers from Michigan Technological University and the London-based company MyMiniFactory published their results on the topic in Technologies this week.

The research team, led by Joshua Pearce, a professor of materials science and electrical engineering at Michigan Tech, focused on how much a desktop 3-D printer could save consumers.

“The 3-D printing industry is now dominated by small, low-cost printers and as the industry grows we’re going to see a lot more DIY manufacturing,” Pearce says. “The evidence is just overwhelming that this makes sense from a consumers’ perspective.”

To dig deeper into the potential savings, the study investigates the 100 most popular downloaded designs from MyMiniFactory, which is one of dozens of repositories where people freely share 3-D printable designs online. They used three different printing materials to analyze the potential costs of printing on an open source Lulzbot 3-D printer–commercial filament (spaghetti-like strands easily purchased online), pellet-extruded filament (cheaper option to make filament at home), and post-consumer waste plastic (converted to filament using a recyclebot).

When a commercially available toy was available for comparison, all filament types saved consumers more than 75 percent of the cost and the recyclebot filament saved more than 90 percent. In total–and just using the data from 100 toys (less than one percent of MyMiniFactory’s repository)–people offset $60 million dollars per year in toy purchases.

To Pearce, an important added value emerged as well: the ability to make novel toys and games that are not commercially available.

“It’s one thing to buy a toy from a store or get a commodity toy for your children,” he says. “It’s perhaps more valuable to get that exact, specific toy that your kid really wants that you can either design yourself or download and customize on your computer and print at home.”

The Legos, the Printed, and the Generic

Pearce and his team also used case studies to delve more into the potential impacts of 3-D printing and what might drive consumers to use DIY manufacturing. They built up one example using one of the world’s most famous and beloved plastic toys.

“Speaking as a parent, Legos are expensive. All parents know you can’t find them at garage sales; everyone hoards them like they’re gold,” Pearce says. “Now you can make custom compatible blocks and have that same kind of fun while playing with something you make yourself.”

A key aspect of DIY manufacturing is judging how well the home-printed version matches the store-bought. With building blocks, an acetone-smoothing went a long way to make recycled ABS plastic look like the brand name and generic versions–with a steep cut in price. A standard Lego block costs six cents; the generic, three cents; and a recyclebot-sourced, 3-D printed block is half a cent.

And as the Lego Movie would have us all believe, playing with building blocks is not about following directions, it’s about invention and creativity. Already there are hundreds of user-designed different types of children’s blocks alone. Although as most parents are probably thinking, it doesn’t hurt to save a few pennies along the way.

Pearce’s team showed significant savings–typically between 40 to 90 percent–even with complex toys like chess sets, math puzzles, toy trucks, action figures and board games. The only time the 3-D printed version didn’t save money was where the quality of the 3-D print significantly surpassed commercial options; this was particularly true for large and intricate costumes and accessories used in cosplay where people dress up as characters from movies, TV shows and videogames.

Pearce says the data indicates that 3-D printing is already having an impact on the industry and it will only grow as 3-D printers become more widespread. He suggests that the best route for toy and game companies is embracing 3-D printing much like Ikea encouraged “Ikea hacks” with its furniture.

“One way toy companies might adapt is open-sourcing some of the designs of the toys themselves and focusing on currently unprintable components or openly encouraging the maker community and open-source community to design accessories or add-ons to commercial toys to make their toys more valuable,” Pearce says. “This is already happening – there are literally millions of free designs. Distributed home manufacturing is the future for toys but also many other products. It would be a big mistake to assume 3-D printers are just toys.”