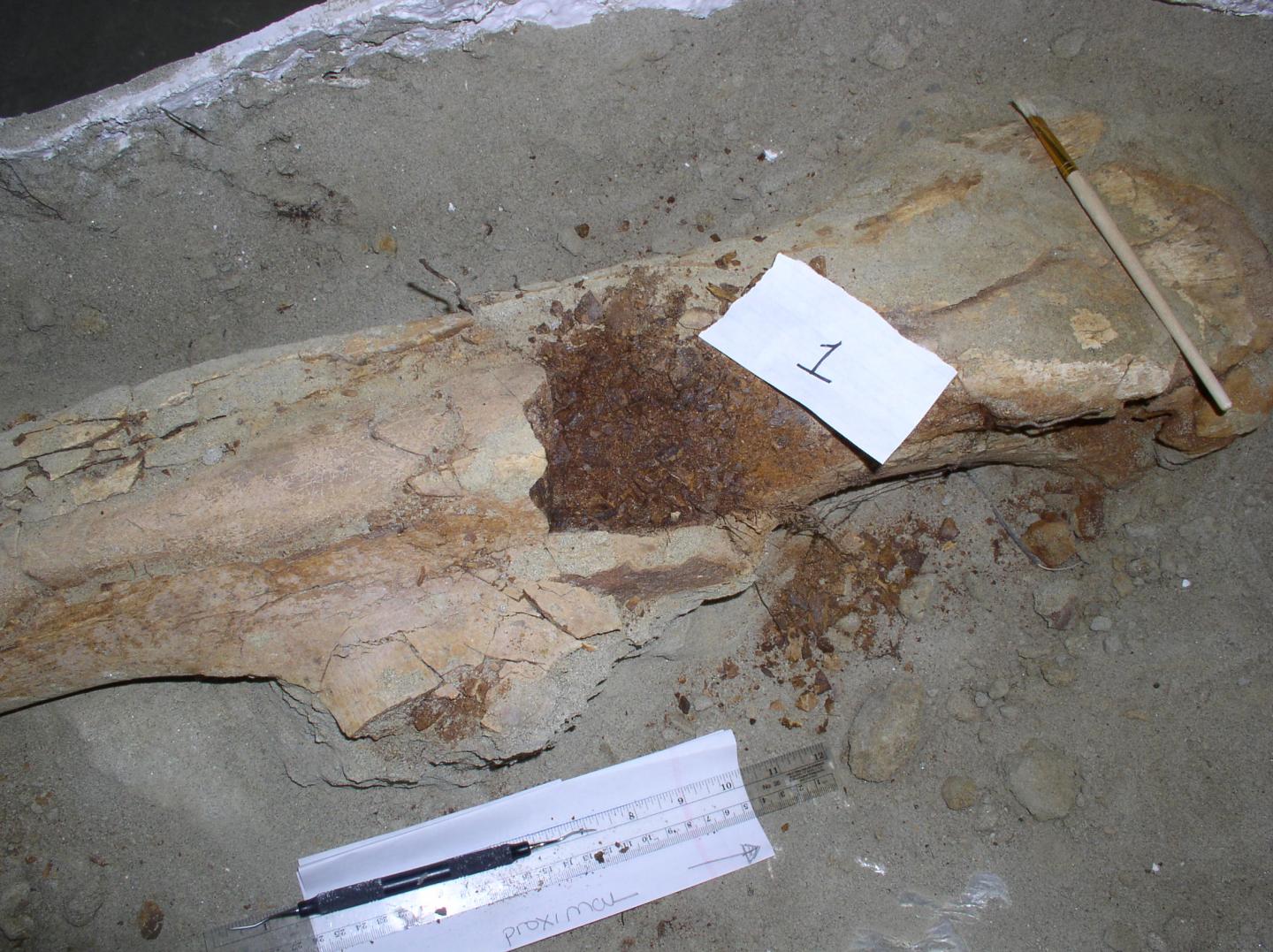 Utilizing the most rigorous testing methods to date, researchers from North Carolina State University have isolated additional collagen peptides from an 80-million-year-old Brachylophosaurus. The work lends further support to the idea that organic molecules can persist in specimens tens of millions of years longer than originally believed and has implications for our ability to study the fossil record on the molecular level.

Elena Schroeter, NC State postdoctoral researcher, and Mary Schweitzer, professor of biological sciences with a joint appointment at the North Carolina Museum of Natural Sciences, wanted to confirm earlier findings of original dinosaur collagen first reported in 2009 from Brachylophosaurus canadensis, a type of hadrosaur, or duck-billed dinosaur, that roamed what is now Montana around 80 million years ago.

“Mass spectrometry technology and protein databases have improved since the first findings were published, and we wanted to not only address questions concerning the original findings, but also demonstrate that it is possible to repeatedly obtain informative peptide sequences from ancient fossils,” Schroeter says.

Collagen is a protein and peptides are the building blocks of proteins. Recovering peptides allows researchers to determine evolutionary relationships between dinosaurs and modern animals, as well as investigate other questions, such as which characteristics of collagen protein allow it to preserve over geological time (or millions of years).

“We collected B. canadensis with molecular investigation in mind,” Schweitzer says. “We left a full meter of sediment around the fossil, used no glues or preservatives, and only exposed the bone in a clean, or aseptic, environment. The mass spectrometer that we used was cleared of contaminants prior to running the sample as well.”

The sample material came from the specimen’s femur, or thigh bone. Using mass spectrometry, the team recovered eight peptide sequences of collagen I, including two that are identical to those recovered in 2009, and six that are new. The sequences show that the collagen I in B. canadensis has similarities with collagen I in both crocodylians and birds, a result we would expect for a hadrosaur, based on predictions made from previous skeletal studies.

“We are confident that the results we obtained are not contamination and that this collagen is original to the specimen,” Schroeter says. “Not only did we replicate part of the 2009 results, thanks to improved methods and technology we did it with a smaller sample and over a shorter period of time.”

“Our purpose here is to build a solid scientific foundation for other scientists to use to ask larger questions of the fossil record,” Schweitzer adds. “We’ve shown that it is possible for these molecules to preserve. Now, we can ask questions that go beyond dinosaur characteristics. For example, other researchers in other disciplines may find that asking why they preserve is important.”