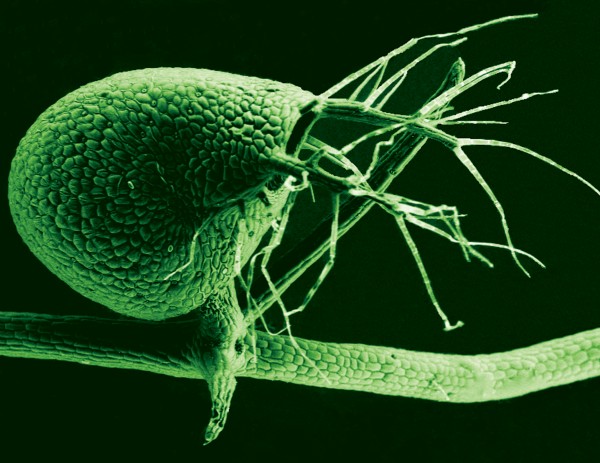 Scanning electron micrograph of the bladder of Utricularia gibba, the humped bladderwort plant (color added). The plant is a voracious carnivore, with its tiny, 1-millimeter-long bladders leveraging vacuum pressure to suck in tiny prey at great speed.

The carnivorous humped bladderwort plant is a sophisticated predator. Living in swamps and ponds, it uses vacuum pressure to suck prey into tiny traps at breathtaking speeds of under a millisecond.

A new genomic analysis shows just how valuable this carnivorous lifestyle has been to the plant throughout its evolutionary history.

Over millions of years, the species, Utricularia gibba, repeatedly retained and enhanced genetic material associated with its carnivorous nature — despite tremendous evolutionary pressure to delete DNA, the research finds.

The biological treasures that were nurtured include genes that facilitate the trapping of prey, the digestion of proteins, and the transport of small bits of protein (derived from the bladderwort’s victims) from one cell to another.

“What’s exciting is that we didn’t go in and cherry pick these genes,” says Victor Albert, PhD, professor of biological sciences in the University at Buffalo College of Arts and Sciences. “We used bioinformatics to identify genes that were preserved and enriched in the species, and when we did that, these genes related to a carnivorous lifestyle were the ones that stood out. They were screaming out at us, telling us to look at them.”

“Through careful analysis, we were able to uncover the genetic signatures of a carnivorous plant,” says Stephan C. Schuster, PhD, professor of biological sciences at Nanyang Technological University in Singapore.

The findings will be published on May 15 in the Proceedings of the National Academy of Sciences. Albert and Schuster co-led the study along with Luis Herrera-Estrella of the Center for Research and Advanced Studies (Cinvestav) in Mexico. Other researchers came from San Diego State University, El Instituto de Ecología in Mexico, the University of Ottawa in Canada and the Fujian Agriculture and Forestry University in China.

The genetic underpinnings of a predatorial plant

Albert, Schuster, Herrera-Estrella and colleagues first reported sequencing the bladderwort genome in 2013, an achievement described in the journal Nature.

However, with new tools available in the field of genomics, the researchers joined forces again to create an even better version of the bladderwort genome for the 2016 study.

The sequencing technique they chose was a single-molecule method developed by Pacific Biosciences (PacBio). Like other technologies, this one reads different sections of DNA in the genome, and then specialized software combines overlapping chunks to form bigger and bigger chains. But the PacBio method enabled the scientists to build a better genome by generating individual strings of bladderwort DNA more than 40 times longer than before.

They were able, for instance, to identify important strings of gene copies known as tandem repeats. These are fragments of genetic material that were accidentally duplicated next to each other, sometimes more than once. Such repeated genes are often lost over time as a species evolves, so the ones that are retained are candidates for having leant their hosts an evolutionary advantage.

That’s especially true of the bladderwort, Albert and colleagues say. They note that the plant has a tiny, gene-rich genome, an indication that the species has had a history of rampant DNA deletion.

Tandem repeats in the bladderwort genome included genes responsible for the creation of papain proteases — “proteins that chew up other proteins,” as Albert puts it — as well as genes that promote peptide transport, in which chopped-up proteins (parts of victims) are shuttled from one bladderwort cell to another. Both groups of genes are highly active in the plant’s vacuum traps, hinting at a role in the digestion of prey.

Tandem repeats also included genes tied to traits such as the acidity of the traps and the elasticity of their cell walls — qualities that may facilitate the plant’s effectiveness as a predator.

“The trap of Utricularia is only two cells thick, and the way it does its trapping is it creates a whole lot of negative pressure inside the trap to suck in the prey once triggered,” Hererra-Estrella says. “The cell walls are under a lot of tension. So it’s no shock at all that there seem to be some interesting clusters of tandem duplicates that deal with the cell wall dynamism.”