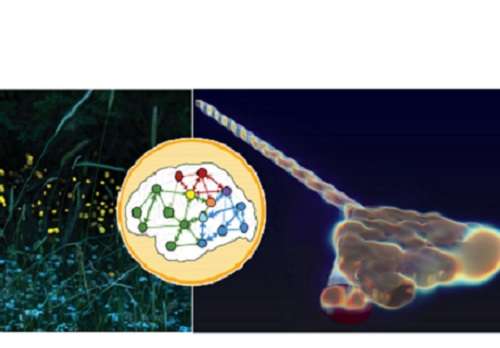 Photonic devices that use controlled laser pulses to manipulate data switches, biomedical implants and solar cells are sought-after because they are lightning quick compared to traditional electronics; however, current prototypes have not been commercialized because of the difficulty in making lasers small enough to fit onto computer circuit boards, while also retaining pulse-shaping capabilities.

“The challenge of reducing an optical source down to the nanoscale is that it starts to emit energy strongly in all directions,” explained Andrea Fratalocchi, an Associate Professor of Electrical Engineering. “This makes it almost impossible to control.”

A partnership with Yuri Kivshar’s group at the Australian National University revealed paths to beat optical diffraction limits with unconventional anapole lasers. Being made from semiconductors shaped into precisely sized nanodisks, anapoles respond to light stimulation by producing electromagnetic waves that either radiate or rotate in donut-shaped toroid distributions.

At specific excitation frequencies, interference between the two fields produces a state—the anapole—which does not emit energy in any direction and traps light inside the nanodisk.

“You can think of this laser as an energy tank—once the laser is on, it stores light and doesn’t let it go until you want to collect it,” said Fratalocchi.

These calculations, along with improved microchip integration and thousand-fold enhancements in coupling to optical routers, predict that anapole nanolasers can generate ultrafast light pulses that are uniquely suited for studying natural patterns of signaling and neural connections.

Fratalocchi notes that the nanolasers would appear invisible to an observer until perturbed by a nearby object. Consequently, arranging the cylindrical light sources into a loop could be used to produce a chain reaction of light emissions, tunable down to as small as femtosecond pulse times.

“It’s really like a population of fireflies, where the individuals synchronize their emissions into beautiful patterns,” he explained “When we place the nanolasers close together, we can get similar control over the pulses.”

The team’s models suggest that integrating different loops of anapole nanolasers may produce oscillating, dynamic patterns useful for reproducing brain-like activities, such as machine learning and memory retrieval at low cost because the platform needs only inexpensive silicon wafers to work.