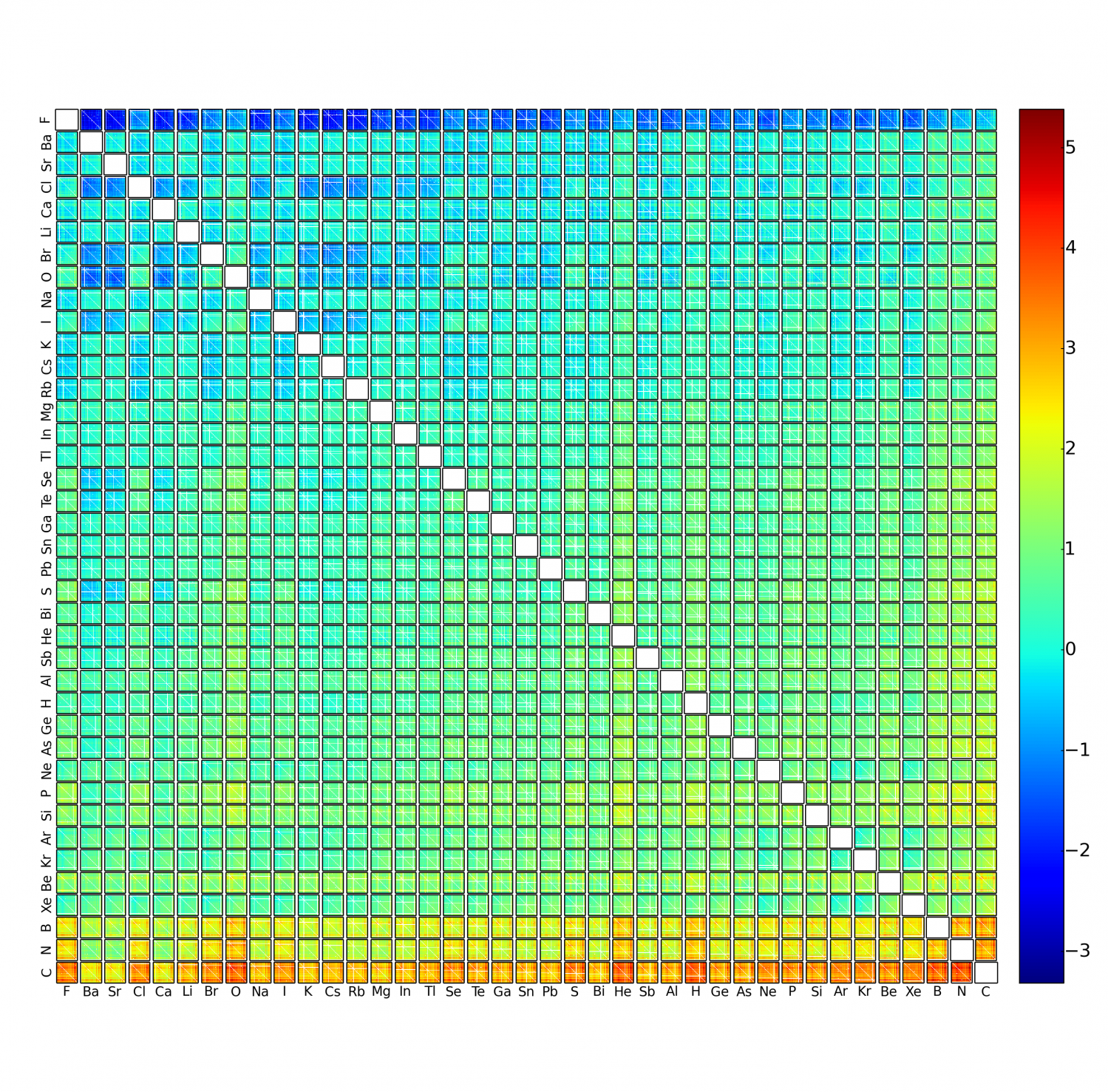 The matrix depicts the formation energy – an indicator of stability – of around two million possible compounds. Each pixel corresponds to one of the two million quaternary crystals. Depending on the combination of elements, they display either a high (red) or low (blue) energy value. One element is specified vertically and one horizontally; each box contains a suitable resolution for the two remaining elements. (Credit: University of Basel, Department of Chemistry)

With the help of artificial intelligence, chemists from the University of Basel in Switzerland have computed the characteristics of about two million crystals made up of four chemical elements. The researchers were able to identify 90 previously unknown thermodynamically stable crystals that can be regarded as new materials. They report on their findings in the scientific journal Physical Review Letters.

Elpasolite is a glassy, transparent, shiny and soft mineral with a cubic crystal structure. First discovered in El Paso County (Colorado, U.S.A.), it can also be found in the Rocky Mountains, Virginia and the Apennines (Italy). In experimental databases, elpasolite is one of the most frequently found quaternary crystals (crystals made up of four chemical elements). Depending on its composition, it can be a metallic conductor, a semi-conductor or an insulator, and may also emit light when exposed to radiation.

These characteristics make elpasolite an interesting candidate for use in scintillators (certain aspects of which can already be demonstrated) and other applications. Its chemical complexity means that, mathematically speaking, it is practically impossible to use quantum mechanics to predict every theoretically viable combination of the four elements in the structure of elpasolite.

Thanks to modern artificial intelligence, Felix Faber, a doctoral student in Prof. Anatole von Lilienfeld’s group at the University of Basel’s Department of Chemistry, has now succeeded in solving this material design problem. First, using quantum mechanics, he generated predictions for thousands of elpasolite crystals with randomly determined chemical compositions. He then used the results to train statistical machine learning models (ML models). The improved algorithmic strategy achieved a predictive accuracy equivalent to that of standard quantum mechanical approaches.

ML models have the advantage of being several orders of magnitude quicker than corresponding quantum mechanical calculations. Within a day, the ML model was able to predict the formation energy – an indicator of chemical stability – of all two million elpasolite crystals that theoretically can be obtained from the main group elements of the periodic table. In contrast, performance of the calculations by quantum mechanical means would have taken a supercomputer more than 20 million hours.

An analysis of the characteristics computed by the model offers new insights into this class of materials. The researchers were able to detect basic trends in formation energy and identify 90 previously unknown crystals that should be thermodynamically stable, according to quantum mechanical predictions.

On the basis of these potential characteristics, elpasolite has been entered into the Materials Project material database, which plays a key role in the Materials Genome Initiative. The initiative was launched by the US government in 2011 with the aim of using computational support to accelerate the discovery and the experimental synthesis of interesting new materials.

Some of the newly discovered elpasolite crystals display exotic electronic characteristics and unusual compositions. “The combination of artificial intelligence, big data, quantum mechanics and supercomputing opens up promising new avenues for deepening our understanding of materials and discovering new ones that we would not consider if we relied solely on human intuition,” says study director von Lilienfeld.