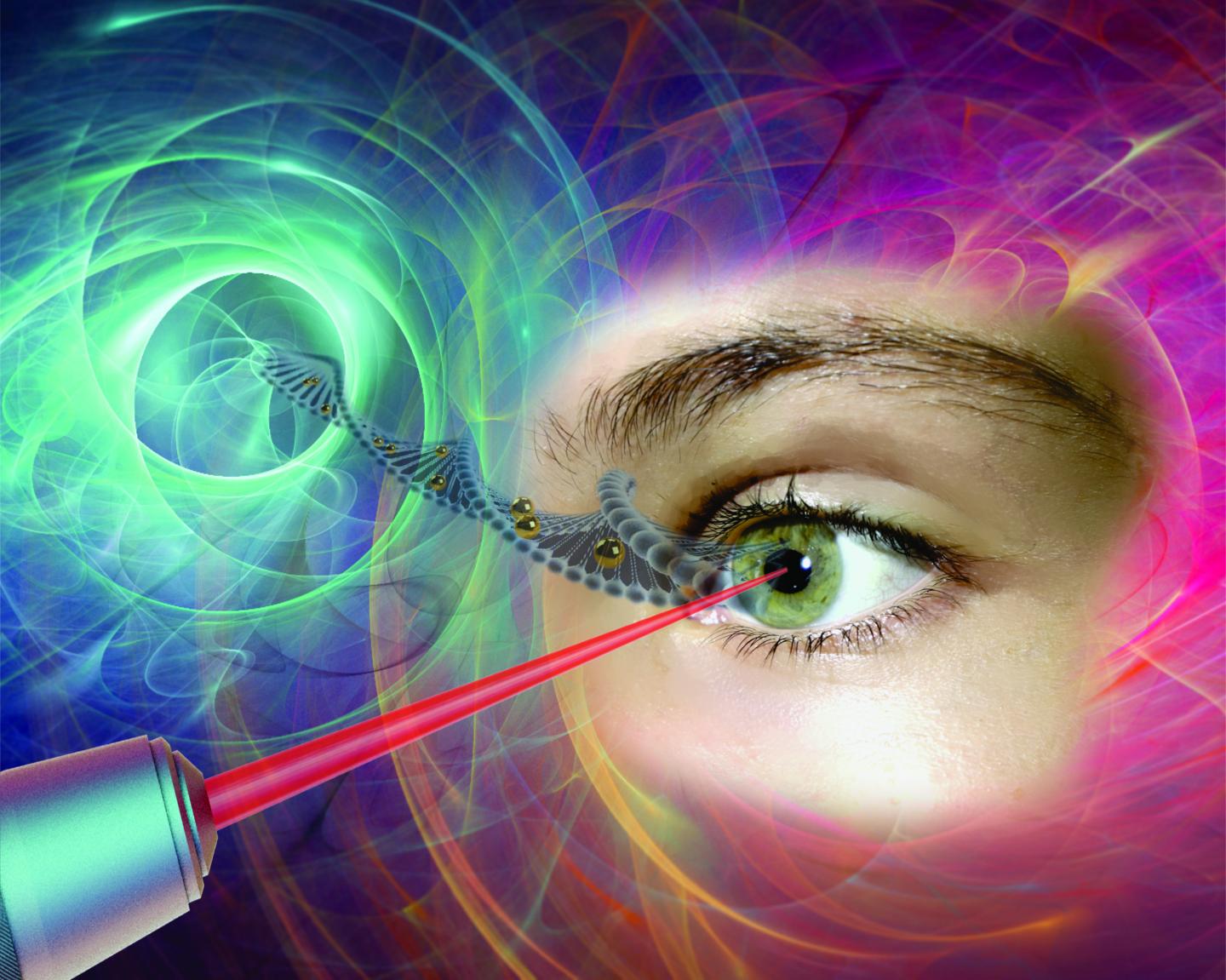 Gold nanoparticles, which act like “nanolenses,” concentrate the energy produced by the extremely short pulse of a femtosecond laser to create a nanoscale incision on the surface of the eye’s retina cells. This technology, which preserves cell integrity, can be used to effectively inject drugs or genes into specific areas of the eye, offering new hope to people with glaucoma, retinitis or macular degeneration. Credit: Polytechnique Montréal

In January 2009, the life of engineer Michel Meunier, a professor at Polytechnique Montréal, changed dramatically. Like others, he had observed that the extremely short pulse of a femtosecond laser (0.000000000000001 second) could make nanometre-sized holes appear in silicon when it was covered by gold nanoparticles. But this researcher, recognized internationally for his skills in laser and nanotechnology, decided to go a step further with what was then just a laboratory curiosity. He wondered if it was possible to go from silicon to living matter, from inorganic to organic. Could the gold nanoparticles and the femtosecond laser, this “light scalpel,” reproduce the same phenomenon with living cells?

Professor Meunier started working on cells in vitro in his Polytechnique laboratory. The challenge was to make a nanometric incision in the cells’ extracellular membrane without damaging it. Using gold nanoparticles that acted as “nanolenses,” Professor Meunier realized that it was possible to concentrate the light energy coming from the laser at a wavelength of 800 nanometres. Since there is very little energy absorption by the cells at this wavelength, their integrity is preserved. Mission accomplished!

Based on this finding, Professor Meunier decided to work on cells in vivo, cells that are part of a complex living cell structure, such as the eye for example.

The eye and the light scalpel

In April 2012, Professor Meunier met Przemyslaw Sapieha, an internationally renowned eye specialist, particularly recognized for his work on the retina. “Mike”, as he goes by, is a professor in the Department of Ophthalmology at Université de Montréal and a researcher at Centre intégré universitaire de santé et de services sociaux (CIUSSS) de l’Est-de-l’Île-de-Montréal. He immediately saw the potential of this new technology and everything that could be done in the eye if you could block the ripple effect that occurs following a trigger that leads to glaucoma or macular degeneration, for example, by injecting drugs, proteins or even genes.

Using a femtosecond laser to treat the eye–a highly specialized and fragile organ–is very complex, however. The eye is part of the central nervous system, and therefore many of the cells or families of cells that compose it are neurons. And when a neuron dies, it does not regenerate like other cells do. Mike Sapieha’s first task was therefore to ensure that a femtosecond laser could be used on one or several neurons without affecting them. This is what is referred to as “proof of concept.”

Mike and Michel called on biochemistry researcher Ariel Wilson, an expert in eye structures and vision mechanisms, as well as Professor Santiago Costantino and his team from the Department of Ophthalmology at Université de Montréal and the CIUSSS de l’Est-de-l’Île-de-Montréal for their expertise in biophotonics. The team first decided to work on healthy cells, because they are better understood than sick cells. They injected gold nanoparticles combined with antibodies to target specific neuronal cells in the eye, and then waited for the nanoparticles to settle around the various neurons or families of neurons, such as the retina. Following the bright flash generated by the femtosecond laser, the expected phenomenon occurred: small holes appeared in the cells of the eye’s retina, making it possible to effectively inject drugs or genes in specific areas of the eye. It was another victory for Michel Meunier and his collaborators, with these conclusive results now opening the path to new treatments.

The key feature of the technology developed by the researchers from Polytechnique and CIUSSS de l’Est-de-l’Île-de-Montréal is its extreme precision. With the use of functionalized gold nanoparticles, the light scalpel makes it possible to precisely locate the family of cells where the doctor will have to intervene.

Having successfully demonstrated proof of concept, Professor Meunier and his team filed a patent application in the United States. This tremendous work was also the subject of a paper reviewed by an impressive reading committee and published in the renowned journal Nano Letters in October 2018.

While there is still a lot of research to be done–at least 10 years’ worth, first on animals and then on humans–this technology could make all the difference in an aging population suffering from eye deterioration for which there are still no effective long-term treatments. It also has the advantage of avoiding the use of viruses commonly employed in gene therapy. These researchers are looking at applications of this technology in all eye diseases, but more particularly in glaucoma, retinitis and macular degeneration.

This light scalpel is unprecedented.