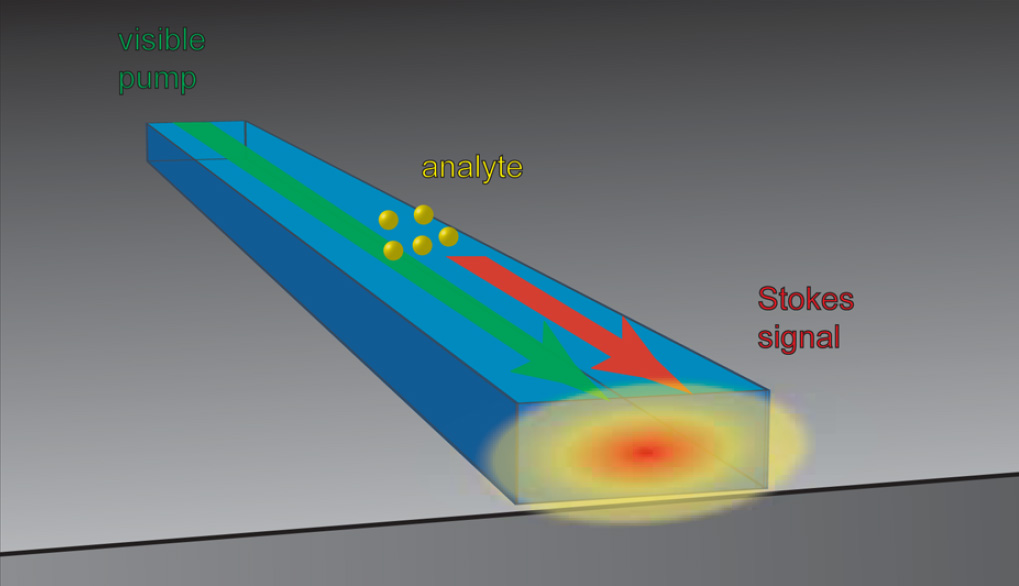 Light traveling through a nanoscale waveguide on a hip spreads beyond the waveguide and can interact with molecules above the surface of the chip. (Credit: Cornell University)

By combining expertise in photonics – manipulating light beams in nanoscale waveguides on a chip – and materials science, Cornell researchers have laid the groundwork for a chemical sensor on a chip that could be used in small portable devices to analyze samples in a lab, monitor air and water quality in the field and perhaps even detect explosives.

The researchers use a phenomenon called “Raman scattering:” when a laser strikes a molecule it kicks back the laser energy as photons of light at a variety of wavelengths that depend on the structure and composition of the molecule.

To allow this phenomenon to occur on a chip, researchers fire a laser into a waveguide – a strip of transparent material made of titanium dioxide, where the light bounces off the inside surfaces and becomes confined to the waveguide. Because a waveguide is only a few nanometers (billionths a meter) high, the light waves spread out beyond the waveguide, creating a so-called “evanescent field” above the surface of the chip. The pumping laser can induce Raman scattering in the space above the chip, or in a drop of liquid placed on its surface for analysis, while still confining the light wave to the chip. Light kicked back by the excited molecules also follows the waveguide; a prism at the end of the waveguide can spread that light into a spectrum that is a “fingerprint” identifying the molecule that produced it.

“If you need a chemical sensor in the lab, that is not a problem,” said Jin Suntivich, assistant professor of materials science and engineering. “But when you are outside, finding a chemical sensor that you can take with you is a challenge. We want to develop a technology that is small enough for a phone, such that your personal electronics can constantly monitor the world around you, and the moment you see something out of the ordinary, the sensor can tell you what it is.”

Sensors based on Raman scattering have been made before, using silicon nitride waveguides. The Cornell researchers have come up with a design that could make a sensor more sensitive and small enough to be used in the field by using a new material, titanium dioxide.

“We’re not the first but we’re the best,” said Christopher Evans, a Kavli Postdoctoral Fellow in the Laboratory of Atomic and Solid State Physics and the Kavli Institute at Cornell for Nanoscale Science. Evans is first author of paper describing the new approach published in the July 14 online edition of the American Chemical Society journal ACS Photonics. Co-authors are Suntivich and Chengyu Liu, a doctoral student in the School of Applied and Engineering Physics.

Titanium dioxide has a much higher refractive index, making a greater contrast with the space above the chip, which creates a stronger evanescent field. The material is also transparent to light at visible wavelengths, a condition that allows researchers to use a laser at shorter, visible wavelengths, which induce better scattering. The researchers tested with a green laser pointer as a light source.

For a future device, a tiny laser unit can be built into a chip, as can a component that can spread out the wavelengths of the kicked off light onto a photosensitive device to read the spectrum. One possibility is to read the spectrum with the camera in a phone.

Interaction of the pumping laser with the material above the chip increases with the length of the waveguide. But the researchers also offer a way to increase the interaction without having to make the chip larger. The solution is a “ring resonator.” When a circular waveguide is set tangent to a straight guide, some of the light will enter the ring and continue to circle around it, letting the light interact continually with the material above the chip many times. The circumference of the ring can be adjusted to resonate with the wavelength of the light, intensifying the effect. “We have shown that we can increase the amount of peak signal from our sensors by an order of magnitude (or more), while simultaneously reducing the device footprint down to the cross-section of a human hair,” Evans said.

Potential applications include portable sensors to monitor air and water quality or conduct laboratory tests in the field. Chemists could and observe chemical reactions while they occur.