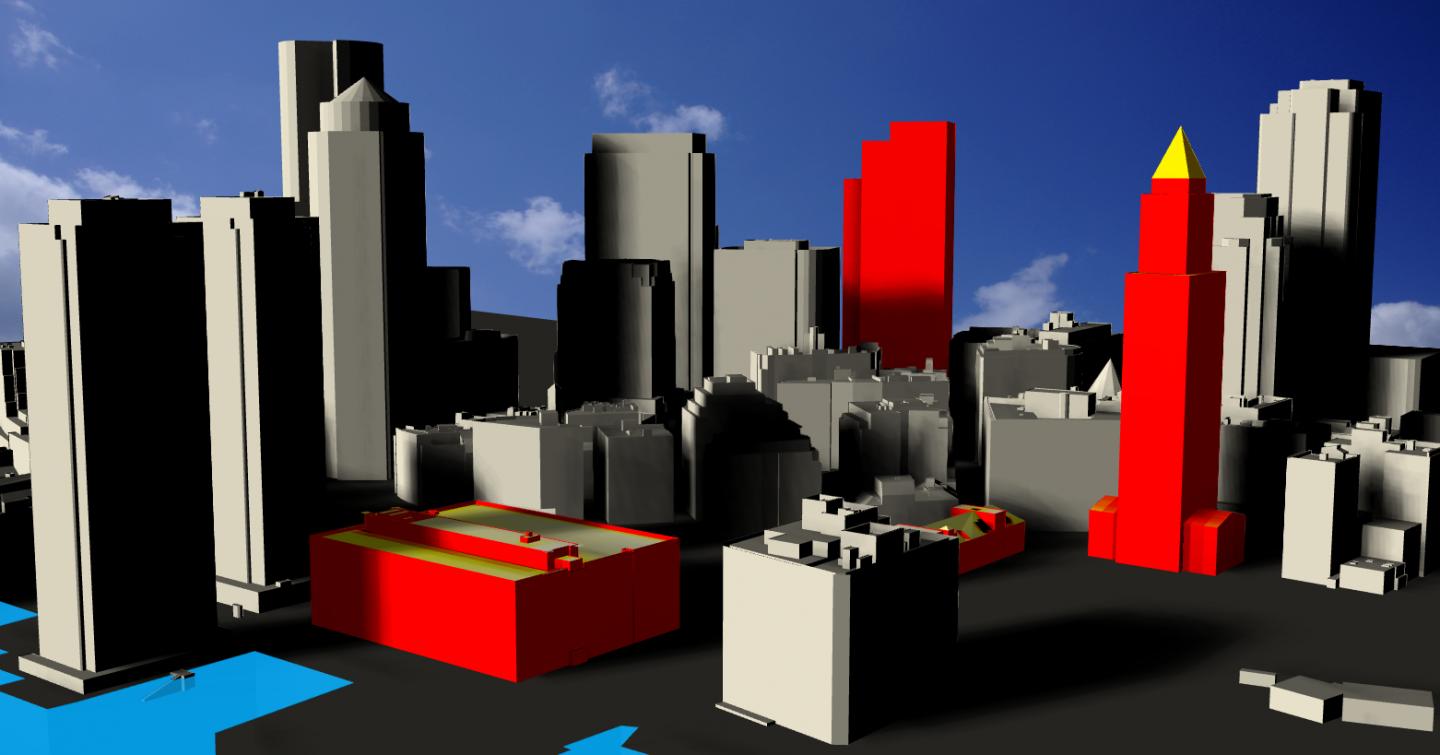 The work carried out at the PVMD group can be used to calculate the solar photovoltaic energy potential of buildings in complex urban landscapes. The image shows results of the model applied to selected façades and roofs of buildings in the city of Boston, Mass. Roofs are painted with brighter colors than façades which indicates a higher energy potential. Base 3D model by Boston Planning & Development Agency is licensed under CC BY 3.0. Credit: Boston Planning & Development Agency

TU Delft researchers have developed a new approach for calculating fast and accurate the solar energy potential of surfaces in the urban environment. The new approach can significantly help architects and urban planners to incorporate photovoltaic (solar power) technology in their designs. The findings were presented on Monday 4 February in Nature Energy.

Buildings, trees and other structures in urban areas cause shading of solar modules, which strongly affects the performance of a PV system. Accurate assessment of this performance, and the related price/performance of PV systems, will facilitate their integration in the urban environment.

Several tools are available for simulating the energy yield of PV systems. These tools are based on mathematical models that determine the irradiance incident on solar modules. By repeating the calculation of the incident irradiance throughout the year, the tools deliver an annual irradiation received by the modules. However, it is not easy to determine accurately how much electricity a PV system generates in an urban environment. Current simulations become computationally highly demanding, as the dynamic shading of surrounding objects caused by the annual movement of the sun has to be taken into account.

A new approach simplifies the calculation and enables the user to carry out a quick assessment of the solar energy potential for large urban areas whilst keeping high accuracy. It is based on a correlation between a skyline profile and the annual irradiation received at a particular urban spot. This method is explained and validated in a study published in Nature Energy journal. The study demonstrates that the total annual solar irradiation received by a selected surface in an urban environment can be quantified using two parameters that are derived from the skyline profile: the sky view factor and the sun coverage factor. While the first parameter is used to estimate the irradiation from the diffuse sunlight component, the second one is indicative for the irradiation from the direct sunlight component. These two parameters can be easily and quickly obtained from the skyline profile. The study shows that the use of these two parameters significantly reduces the computational complexity of the problem.

Andrés Calcabrini, PhD student in the department of Electrical Sustainable Energy, developed the new approach under supervision of Dr Olindo Isabella and Professor Miro Zeman. The Photovoltaic Materials and Devices (PVMD) group has already integrated the approach in a software toolbox that can accurately calculate the energy yield of PV systems at any location. Olindo Isabella, head of the PVMD group: “Our fast approach integrated in software tools for calculating the solar energy potential can significantly facilitate design and distribution of buildings with integrated PV systems in urban planning frameworks. It will also help investors to take decisions on integrating PV systems in buildings and other urban locations.”

This research has been carried out as a part of the Solar Urban programme of Delft University of Technology.