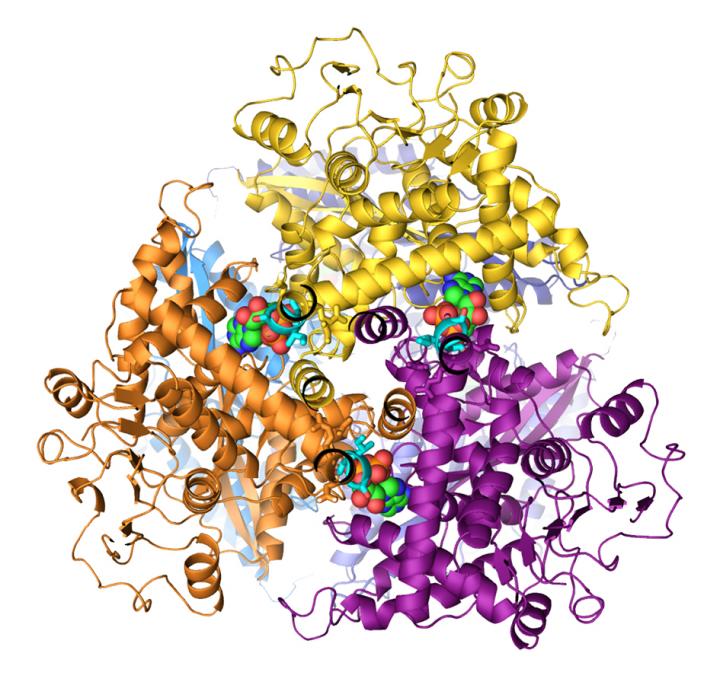 Hyperinsulinism is linked to the GDH protein. When open (at left), the protein can more easily attach itself to a molecule that is necessary for its activity than when it is closed (at right): this sends a signal instructing the pancreas to produce insulin. A mutation of the GDH protein disrupts this mechanism and keeps the protein open, which in turn leads to insulin overproduction. Source: Pierre Maechler / UNIGE

Diabetes is characterised by a deficiency of insulin. The opposite is the case in congenital hyperinsulinism: patients produce the hormone too frequently and in excessive quantities, even if they haven’t eaten any carbohydrates. Since the function of insulin is to metabolise sugars, excess production of insulin leads to chronic hypoglycaemia. The brain, which devours vast quantities of energy, is perpetually undernourished.

The disorder can therefore lead to serious brain damage and even death in the worst cases. A team at the University of Geneva (UNIGE), Switzerland, supported by the Swiss National Science Foundation (SNSF) has succeeded in precisely describing the effects of a frequent genetic mutation in cases of congenital hyperinsulinism. This discovery, which has been published in Human Molecular Genetics, could pave the way for new therapies.

Congenital hyperinsulinism starts exerting its effects from birth. Although it is considered to be a rare disease, affecting roughly one in every 50,000 newborn babies, it may be underdiagnosed. “Unless you are looking for it, hypoglycaemia can easily go unnoticed in an infant,” explains Pierre Maechler, a researcher at the Faculty Diabetes Center from the Faculty of Medecine, UNIGE and the lead author of the study. “Without intervention it can rapidly take a dramatic course.”

The researchers focused on a genetic mutation known to be associated with hyperinsulinism. This gene produces a protein known as GDH, which instructs the pancreas to release insulin. It normally behaves differently once the level of blood glucose passes a certain threshold. Then GDH opens up to receive a molecule known as an accelerator that binds to it. In this way the protein moves into the active phase, which in turn sends a signal to the pancreas, causing it to produce more insulin.

In congenital hyperinsulinism the mutant gene causes the structure of the protein to change. The protein remains permanently receptive to the accelerator molecule, whatever the level of glucose in the blood. As a result, it constantly sends signals to the pancreas, telling it to release insulin, which it then does excessively.

Insulin promotes the transfer of glucose to the muscles. If there is a constant surplus of insulin, it leads to undernourishment of the brain, which in turn results in brain damage and intellectual retardation, and to coma and even death in the most critical cases. Sugar is not the main culprit, though. “In these patients, even a meal consisting solely of protein will trigger the production of insulin,” Pierre Maechler explains.

People with this mutation also develop a surplus of ammonia – known as hyperammonaemia – which can equally have serious repercussions on brain function. This work, which was carried out by the PhD student Mariagrazia Grimaldi, showed that the cause of this problem is exactly the same: the mutant version of the GDH protein, which is always receptive to its accelerator, also causes excess production of ammonia in the liver.

The treatments currently available for congenital hyperinsulinism are problematic: they range from almost total removal of the pancreas, which produces diabetes artificially, to administration of drugs which regulate the activity of the pancreatic cells more or less precisely but have major side effects.

This new study could pave the way for new treatments. “We can imagine developing a drug that inhibits the GDH accelerator by occupying the same site, which would reduce the production of insulin,” Pierre Maechler says. A drug of this type might also be used to treat obesity: if there is no insulin in the body, the person does not gain weight. The researcher points out that “the protein GDH could enable the production of insulin to be regulated. This type of approach, while appearing to offer an extremely simple solution, would of course raise questions and ethical problems. But we know that in some cases diets don’t work, and gastric bypass surgery is by no means a harmless solution either.”

The team working with Pierre Maechler is also studying the role of fructose in the development of type 2 diabetes. In a forthcoming publication it shows that this sugar leads to glucose hypersensitivity, which manifests as increased insulin production. This discovery could confirm the suspected links between the massive use of fructose by the food industry since the 1980s and the sharp increase in the number of people with type 2 diabetes a few years later.