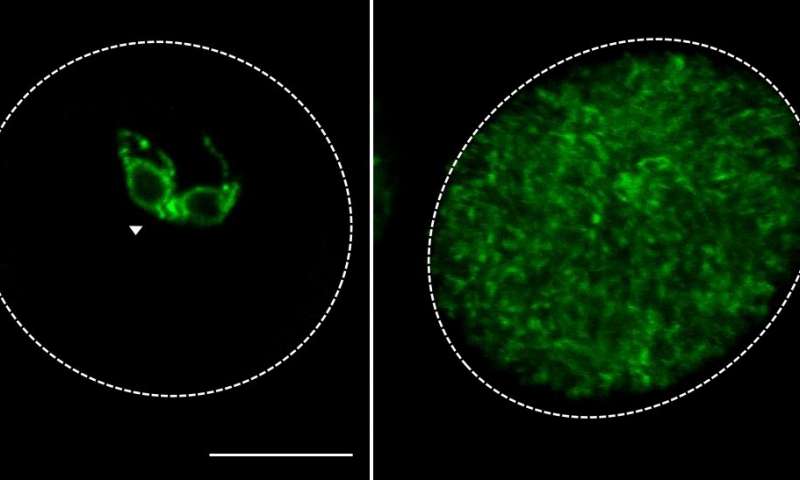 At left, in a normal Arabidopsis thaliana pollen grain (inside the dashed line), glutamate receptor-like proteins (green) are located in the sperm cells (arrow). At right, in a plant with a mutated cornichon protein gene, the receptor proteins are scattered throughout the entire pollen grain, disrupting important calcium signaling processes. Credit: José Feijó/University of Maryland

Plant cells share a strange and surprising kinship with animal neurons: many plant cells have proteins that closely resemble glutamate receptors, which help to relay nerve signals from one neuron to another. While plants lack a true nervous system, previous studies have shown that plants need these glutamate receptor-like proteins (GLRs) to do important things such as mate, grow, and defend themselves against diseases and pests.

A study led by University of Maryland researchers suggests a new model for how GLRs function in plant cells. Working with Arabidopsis thaliana pollen cells, the researchers found that GLRs form the basis of a complex communication network inside individual plant cells. Their findings also suggest that GLRs rely on another group of proteins, called “cornichon” proteins, to shuttle GLRs to different locations and regulate GLR activity within each cell.

With the help of cornichon proteins, GLRs act as valves that carefully manage the concentration of calcium ions—a vital aspect of many cell communication pathways—within various structures inside the cell, the study found. The research, which could inform many new studies of cell-to-cell communication in plants and animals alike, is featured on the cover of the May 4, 2018, issue of the journal Science. Researchers from the Instituto Gulbenkian de Ciência in Portugal and the Universidad Nacional de Autónoma de México co-authored the study.

“Calcium concentration is one of the most important parameters inside all cells. It is so well regulated that it allows cells to encode information. Put another way, calcium is the lingua franca of cell communication,” said José Feijó, a professor of cell biology and molecular genetics at UMD and the senior author of the study, noting that calcium is also vital to the function of animal neurons. “Our results suggest that GLRs play a role in this basic communication system in plants, and we also propose a mechanism for how the system works in plant cells.”

The similarities between GLRs and animal glutamate receptors suggest that the proteins date back to a common ancestor—a single-celled organism that gave rise to both animals and plants. However, Feijó noted some important differences between GLRs and their counterparts in animal neurons.

To begin with, glutamate—the most common neurotransmitter in the human brain—does not play a major role in the plant system. Also, while glutamate receptors are known to sit on the outer surface of animal neurons, some of Feijo’s earlier experiments suggested that GLRs might instead be located on various structures inside plant cells.

“This would be the only way to consistently explain the results we were getting,” Feijó said. “Our results suggest that GLRs are indeed redistributed to other compartments inside plant cells, forming a complex network that cooperates to regulate calcium concentrations and enable calcium signaling. This is a novel insight that opens completely new avenues to understand calcium signaling in plants.”

Feijó and Michael Wudick, a postdoctoral researcher in cell biology and molecular genetics at UMD and lead author of the paper, suspected that plant cells use a specific mechanism to control the locations of GLRs throughout the cell. This led Wudick to investigate cornichon proteins, which are linked to the activity of glutamate receptors in animals. Initially identified in fruit flies, cornichon proteins are named for the pickle-like appearance that a specific cornichon gene mutation imparts to fruit fly embryos, Feijo said.

In their experiments with Arabidopsis pollen cells, Feijó’s team found that cornichon proteins actively shuttled GLRs from one location to another within the cell, enabling various compartments inside the cell to maintain different calcium ion concentrations. Cornichons also act as gatekeepers for GLRs, switching the receptor molecules off and on like a valve in response to changing conditions inside the cell.

All told, the team’s results suggest a model for plant cell communication that is unlike anything found in animals. While animal neurons use glutamate receptors to conduct signals from cell to cell, Feijó suggested that plants depend on communication strategies that operate at the single-cell level.

“Why should plants have receptors like the ones that make neurons work? Our results support the idea that individual plant cells have a level of autonomy that animal cells do not,” Feijó said. “Each plant cell has its own immune system, for example. And they have more communication channels to deal with the fact that they are stuck in place. Every flowering plant has more GLRs than animals have glutamate receptors. Our proposed model for plant cell communication suggests one reason for this abundance of GLRs.”

Further progress toward decoding plant communication could result in reliable tests to diagnose diseases, nutrient deficiencies and other maladies in plants, Feijó said. Such measures could help to ensure food security, as climate change and other stressors begin to take a toll on major agricultural crops.

Feijó also noted that a deeper understanding of GLRs could reveal new insights into animal glutamate receptors and their defects, which could be the cause of some neurodegenerative conditions.

“Some researchers have suggested that neurodegeneration is caused by over-active glutamate receptors. This is not settled, but there are some conditions in both humans and dogs that have been linked to mutations in glutamate receptor genes,” Feijó said. “It is possible that our model could help investigate these conditions. The advantage is that our protocol is very easy to use.”