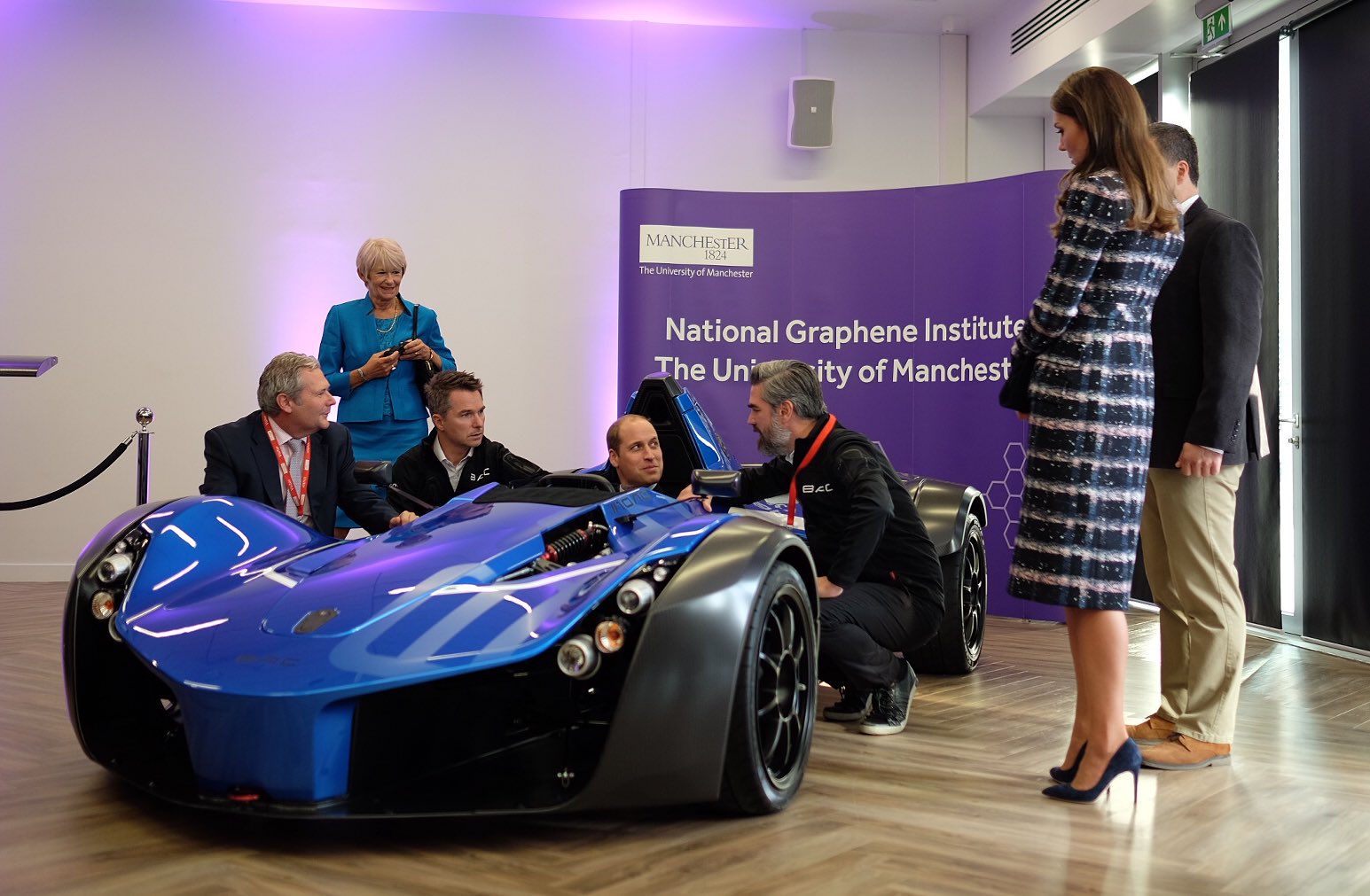 The Duke of Cambridge tries out a car made of graphene at the University of Manchester. Image: Courtesy of the Kensington Palace Twitter account @KensingtonRoyal

Their Royal Highnesses The Duke and Duchess of Cambridge — better known as Prince William and his wife, the former Kate Middleton — paid a visit to The University of Manchester to learn about graphene research and to celebrate the University’s new Manchester Engineering Campus Development.

The University of Manchester is known as the Birthplace of Graphene. Six years after their groundbreaking isolation of the “wonder material” graphene, researchers Andre Geim and Kostya Novoselov of university were awarded the 2010 Nobel Prize in physics for their work. The university hosts The National Graphene Institute and is a member of the European Commission’s research initiative “Graphene Flagship,” which is tasked with taking graphene from the realm of academic laboratories into European society within 10 years.

The Duke was invited to take a seat inside the BAC Mono single-seat supercar, the world’s first car to use graphene in the production process, while the Duchess watched. The British-built car utilizes graphene composite rear wheel arches in order to lower the car’s weight and provide a better performance for the driver. The car was designed and built in Liverpool, and uses graphene supplied by Haydale.

During their visit, the Duke and Duchess were shown graphene applications such as energy-efficient lighting, membranes for improved desalination technology, and a graphene-skinned aircraft. Then they were presented with personalized 3D-printed toy cars that incorporated graphene as gifts for their two young children, Prince George and Princess Charlotte.

The couple also observed the site of the Manchester Engineering Campus Development (MECD), slated to open in 2020. MECD, one of the single largest construction projects ever undertaken by a higher education institution in the U.K., will house four engineering schools and two research institutes. To complete their visit, the Cambridges participated in a time capsule-sealing ceremony and unveiled a commemorative plaque to mark their visit.

The royal couple is following in the footsteps of the Duke’s grandmother, Queen Elizabeth II. Her Majesty, whose reign has spanned over 60 years, sent her first email before many people had even heard of the Internet; pioneered television ownership in the U.K. after hundreds of thousands of people rushed out to buy sets to view her coronation ceremony; and recently received a nanoscale greeting card etched on a single strand of dog hair.

For a brief synopsis of some of the science and technology the Queen has observed in her lifetime, dating from her teen years up to her 90th birthday this past April, click here: http://www.cemag.us/blog/2016/04/queen-elizabeth-no-stranger-science-and-technology-even-90