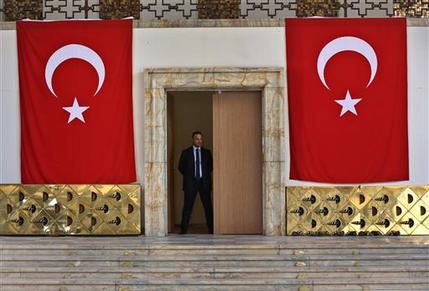 A Turkish parliament security man stands guard next to the broken yellow copper doors laid on the ground at the entrance of the assembly hall at the parliament building which was attacked by the Turkish warplanes during the failed military coup last Friday, in Ankara, Turkey, Tuesday, July 19, 2016. The violence surrounding the Friday night coup attempt claimed the lives of 208 government supporters and 24 coup plotters, according to the government. (AP Photo/Hussein Malla)

Access to the Wikileaks website in Turkey has been blocked after the group announced, following a failed coup by Turkish military units, that it would release a trove of documents on the country’s power structure.

There was no immediate statement Wednesday from Turkey’s Telecommunications Board, a government agency that regulates access to websites.

The Turkish government has previously banned access to websites deemed to be carrying material critical of Turkey, including YouTube and Twitter. Some opposition media websites were blocked following Friday night’s coup attempt, which was quashed by security forces loyal to President Recep Tayyip Erdogan.

Wikileaks said on Twitter that Turks who are blocked from accessing its website can “use a proxy or any of our IPs” to get access to the documents on Turkey’s ruling party.