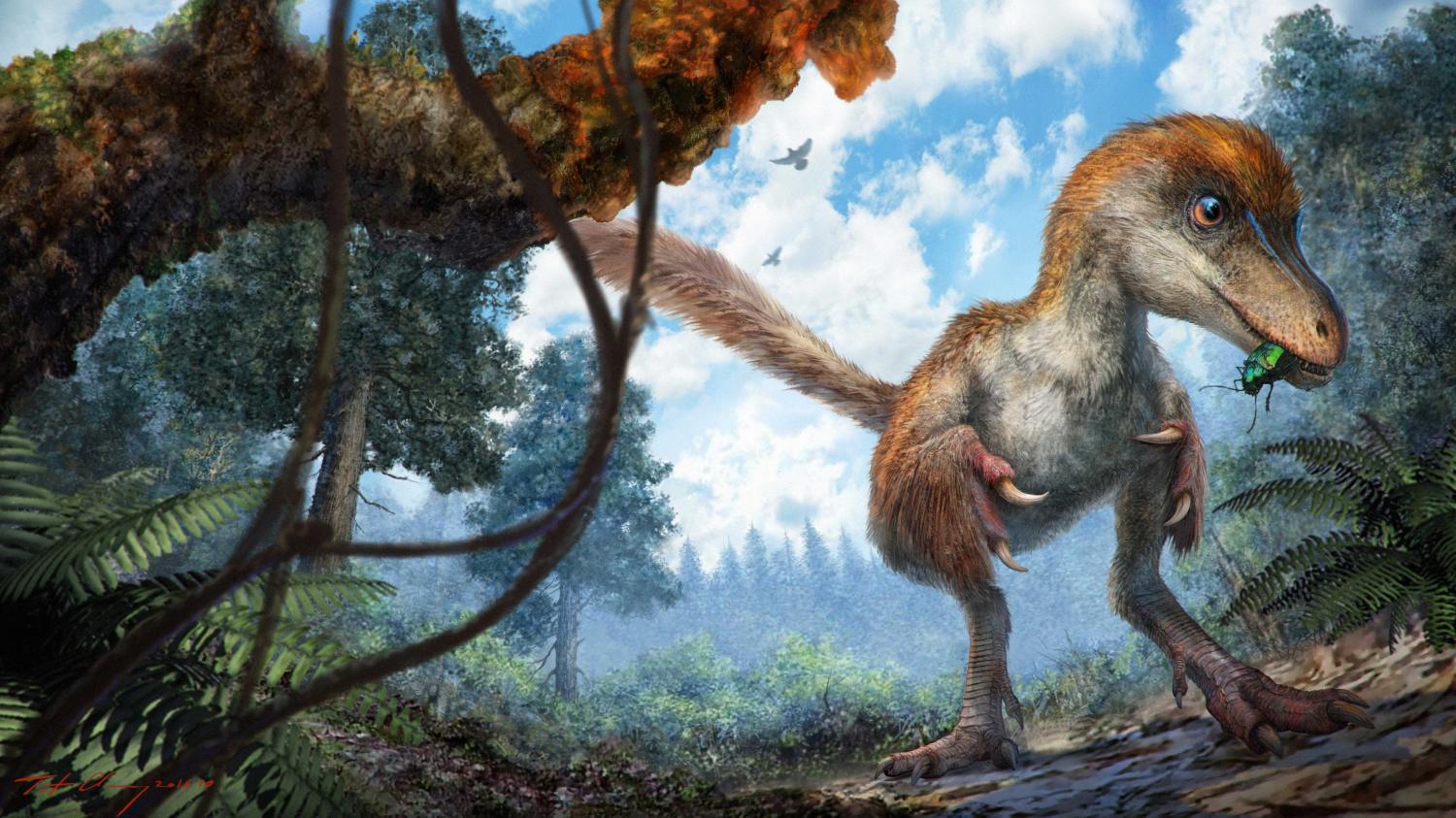 Researchers have discovered a dinosaur tail complete with its feathers trapped in a piece of amber. The finding reported in Current Biology on December 8 helps to fill in details of the dinosaurs’ feather structure and evolution, which can’t be determined from fossil evidence.

While the feathers aren’t the first to be found in amber, earlier specimens have been difficult to definitively link to their source animal, the researchers say.

“The new material preserves a tail consisting of eight vertebrae from a juvenile; these are surrounded by feathers that are preserved in 3D and with microscopic detail,” says Ryan McKellar of the Royal Saskatchewan Museum in Canada. “We can be sure of the source because the vertebrae are not fused into a rod or pygostyle as in modern birds and their closest relatives. Instead, the tail is long and flexible, with keels of feathers running down each side.” In other words, the feathers definitely are those of a dinosaur not a prehistoric bird.

The study’s first author Lida Xing from the China University of Geosciences (Beijing) discovered the remarkable specimen at an amber market in Myitkyina, Myanmar in 2015. The amber piece was originally seen as some kind of plant inclusion and destined to become a curiosity or piece of jewelry, but Xing recognized its potential scientific importance and suggested that the Dexu Institute of Palaeontology buy the specimen.

The researchers say that the specimen represents the feathered tail of a non-avialan theropod preserved in mid-Cretaceous amber about 99 million years ago. While it was initially difficult to make out the details of the amber inclusion, Xing and his colleagues relied on CT scanning and microscopic observations to get a closer look.

The feathers suggest that the tail had a chestnut-brown upper surface and a pale or white underside. The specimen also offers insight into feather evolution. The feathers lack a well-developed central shaft or rachis. Their structure suggests that the two finest tiers of branching in modern feathers, known as barbs and barbules, arose before a rachis formed.

The researchers also examined the chemistry of the tail inclusion where it was exposed at the surface of the amber. The analysis shows that the soft tissue layer around the bones retained traces of ferrous iron, a relic left over from hemoglobin that was also trapped in the sample.

The findings show the value of amber as a supplement to the fossil record.

“Amber pieces preserve tiny snapshots of ancient ecosystems, but they record microscopic details, three-dimensional arrangements, and labile tissues that are difficult to study in other settings,” McKellar says. “This is a new source of information that is worth researching with intensity and protecting as a fossil resource.”

The researchers say they are now “eager to see how additional finds from this region will reshape our understanding of plumage and soft tissues in dinosaurs and other vertebrates.”