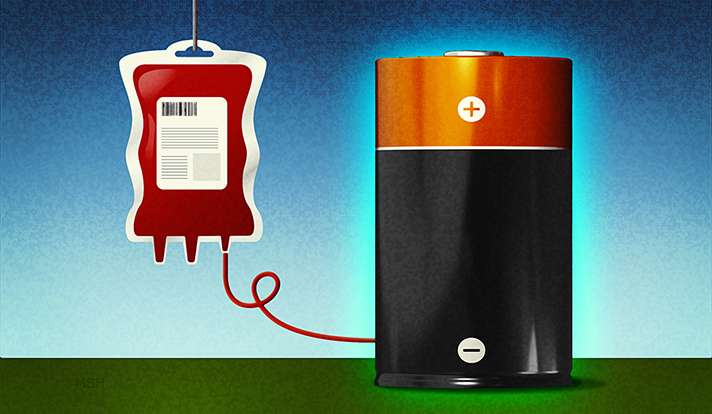 Just in time for Halloween, a Yale lab has identified a molecule that transports oxygen in blood that could pave the way for a new environmentally friendly way to produce batteries for cell phones, tablets and other electronic devices.

Andre Taylor, associate professor of chemical and environmental engineering at Yale University, has identified the molecule heme as a better catalyst to produce lithium-oxygen batteries, which has emerged in recent years as a successor to lithium-ion batteries because of their propensity to hold a charge for longer periods of time.

While researchers primarily agree that lithium-oxygen batteries will produce better results, there is still a need to make the batteries efficient enough for commercial application and prevent the formation of lithium peroxide, a solid precipitate that covers the surface of the batteries’ oxygen electrodes.

Finding a catalyst that efficiently facilitates oxygen evolution reaction—a process in which lithium oxide products decompose back into lithium ions and oxygen gas—has been particularly problematic for researchers.

According to a 2014 ScienceWatch article, lithium-oxygen batteries could provide up to five times more energy than the lithium-ion batteries. However, the same article cites the use of lithium, a reactive metal that requires contact with an electrolyte that it does not react with as one of the main problems in producing lithium-based batteries.

Taylor’s research shows that the heme molecule—which makes up one of the two parts of a hemoglobin and carries oxygen in the blood of animals—improved the batteries’ cell function by lowering the amount of energy required to improve the battery’s charge/discharge cycle times.

“When you breathe in air, the heme molecule absorbs oxygen from the air to your lungs and when you exhale, it transports carbon dioxide back out,” Taylor said in a statement. “So it has a good binding with oxygen and we saw this as a way to enhance these promising lithium-air batteries.”

According to lead author Won-Hee Ryu, assistant professor of chemical and biological engineering at Sookmyung Women’s University in South Korea and a former postdoctoral researcher in Taylor’s lab, the molecule would dissolve into the battery’s electrolytes and act as a redox mediator, which lowers the energy barrier required for the electrochemical reaction to take place.

The new batteries could allow electronic devices to go weeks without needing to be charged and for electric cars to travel four to five times longer than the current standard.

Another benefit of using the heme molecule to produce batteries is it may end up reducing the amount of animal waste.

“We’re using a biomolecule that traditionally is just wasted,” Taylor added. “In the animal products industry, they have to figure out some way to dispose of the blood. Here, we can take the heme molecules from these waste products and use it for renewable energy storage.”