Researchers at the National Institute of Standards and Technology (NIST) have built a superconducting switch that “learns” like a biological system and could connect processors and store memories in future computers operating like the human brain.

The NIST switch, described in Science Advances, is called a synapse, like its biological counterpart, and it supplies a missing piece for so-called neuromorphic computers. Envisioned as a new type of artificial intelligence, such computers could boost perception and decision-making for applications such as self-driving cars and cancer diagnosis.

A synapse is a connection or switch between two brain cells. NIST’s artificial synapse — a squat metallic cylinder 10 micrometers in diameter — is like the real thing because it can process incoming electrical spikes to customize spiking output signals. This processing is based on a flexible internal design that can be tuned by experience or its environment. The more firing between cells or processors, the stronger the connection. Both the real and artificial synapses can thus maintain old circuits and create new ones.

Even better than the real thing, the NIST synapse can fire much faster than the human brain — 1 billion times per second, compared to a brain cell’s 50 times per second — using just a whiff of energy, about one ten-thousandth as much as a human synapse. In technical terms, the spiking energy is less than 1 attojoule, lower than the background energy at room temperature and on a par with the chemical energy bonding two atoms in a molecule.

“The NIST synapse has lower energy needs than the human synapse, and we don’t know of any other artificial synapse that uses less energy,” NIST physicist Mike Schneider says.

The new synapse would be used in neuromorphic computers made of superconducting components, which can transmit electricity without resistance, and therefore, would be more efficient than other designs based on semiconductors or software. Data would be transmitted, processed and stored in units of magnetic flux. Superconducting devices mimicking brain cells and transmission lines have been developed, but until now, efficient synapses — a crucial piece — have been missing.

The NIST synapse is a Josephson junction, long used in NIST voltage standards. These junctions are a sandwich of superconducting materials with an insulator as a filling. When an electrical current through the junction exceeds a level called the critical current, voltage spikes are produced. The synapse uses standard niobium electrodes but has a unique filling made of nanoscale clusters of manganese in a silicon matrix.

The nanoclusters — about 20,000 per square micrometer — act like tiny bar magnets with “spins” that can be oriented either randomly or in a coordinated manner.

“These are customized Josephson junctions,” Schneider says. “We can control the number of nanoclusters pointing in the same direction, which affects the superconducting properties of the junction.” 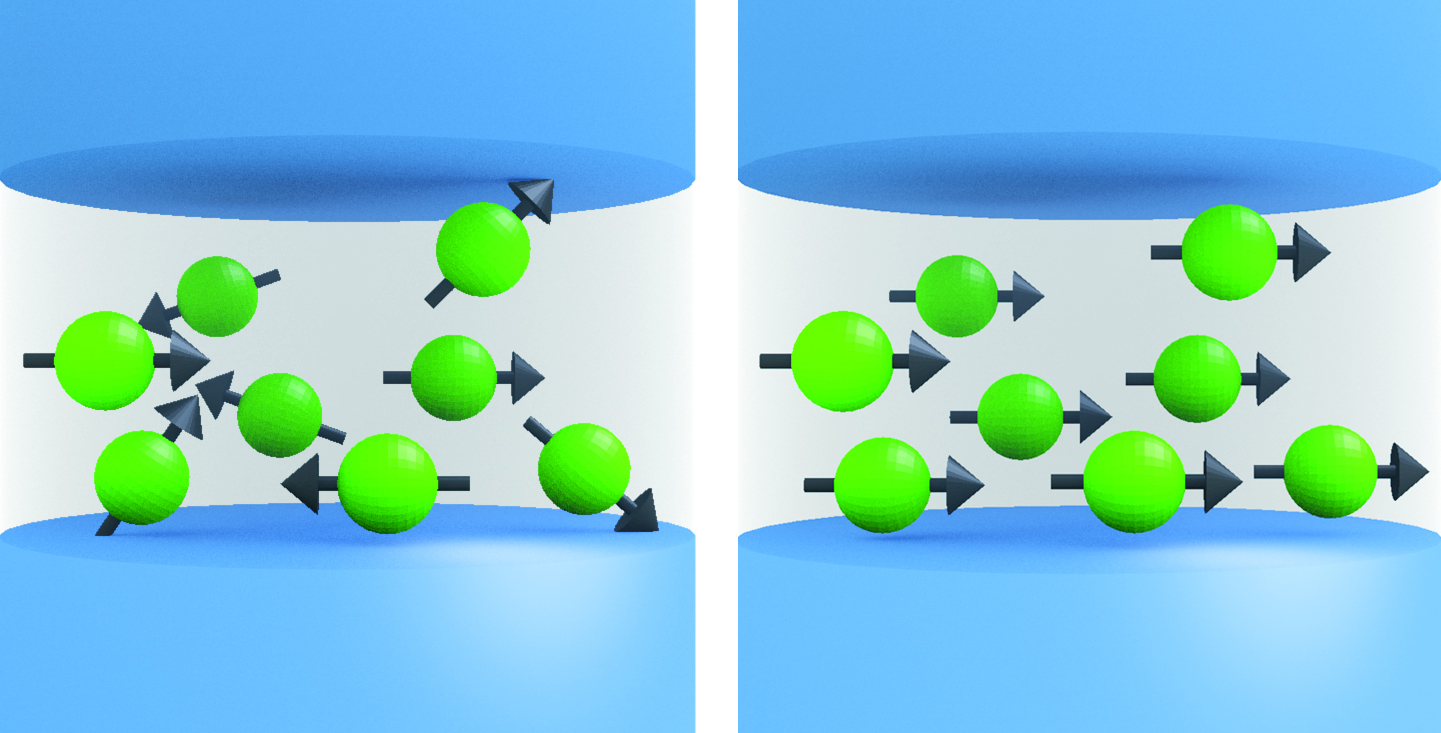 Illustrations showing the basic operation of NIST’s artificial synapse, which could connect processors and store memories in future neuromorphic computers operating like the human brain. A synapse is a connection or switch between two brain cells. NIST’s artificial synapse is a tiny metal cylinder that processes incoming electrical spikes to customize spiking output signals based on a tunable internal design. Researchers apply current pulses to control the number of nanoclusters pointing in the same direction, as depicted in the “disordered” versus “ordered” illustrations. This design, in which different inputs alter the alignment and resulting output signals, is inspired by how the brain operates. Image: NIST

The synapse rests in a superconducting state, except when it’s activated by incoming current and starts producing voltage spikes. Researchers apply current pulses in a magnetic field to boost the magnetic ordering, that is, the number of nanoclusters pointing in the same direction. This magnetic effect progressively reduces the critical current level, making it easier to create a normal conductor and produce voltage spikes.

The critical current is the lowest when all the nanoclusters are aligned. The process is also reversible: Pulses are applied without a magnetic field to reduce the magnetic ordering and raise the critical current. This design, in which different inputs alter the spin alignment and resulting output signals, is similar to how the brain operates.

Synapse behavior can also be tuned by changing how the device is made and its operating temperature. By making the nanoclusters smaller, researchers can reduce the pulse energy needed to raise or lower the magnetic order of the device. Raising the operating temperature slightly from minus 271.15 degrees C (minus 456.07 degrees F) to minus 269.15 degrees C (minus 452.47 degrees F), for example, results in more and higher voltage spikes.

Crucially, the synapses can be stacked in three dimensions (3-D) to make large systems that could be used for computing. NIST researchers created a circuit model to simulate how such a system would operate.

The NIST synapse’s combination of small size, superfast spiking signals, low energy needs and 3-D stacking capability could provide the means for a far more complex neuromorphic system than has been demonstrated with other technologies, according to the paper.