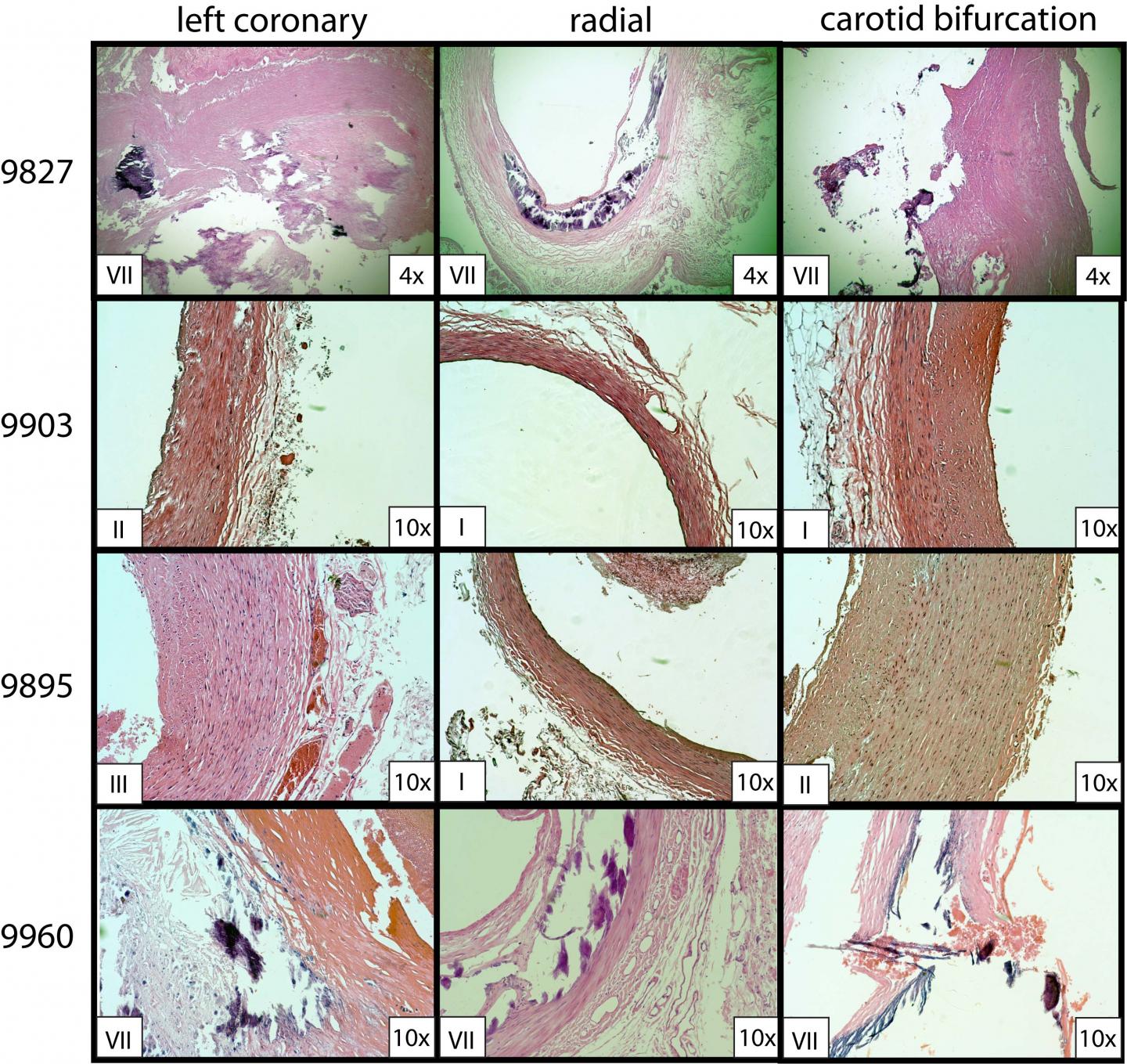 The purpose of this figure is to demonstrate the similar pathology noted in different vessels of the same individual, ultimately suggesting an underlying relationship between them. Each horizontal panel depicts samples collected from a single individual; samples from four individuals are displayed here. The numbers on the left border of the figure represent the assigned cadaver number. The numeral on the bottom left corner of each photo represents the section’s assigned grade, while the number on the bottom right corner indicates the magnification. Each vertical column depicts sections of a specific vessel sampled from each cadaver: the radial, carotid bifurcation, and left coronary arteries. The radial artery is a peripheral artery, the bifurcation is a carotid artery, and the left coronary is a central artery. Source: Christopher Hoehmann, NYIT Medical Student

Atherosclerosis, commonly known as hardening of the arteries, has long been seen as a strong indicator of coronary artery disease, as compared to the traditional risk factors of race, age, gender and metabolic profile. Unlike other diseases that affect many people, atherosclerosis currently has no simple way to diagnose or monitor response to treatment.

“Peripheral Arteries May Be Reliable Indicators of Coronary Vascular Disease,” is authored by Brian L. Beatty, Ph.D., and Bennett Futterman, M.D., both associate professors of Anatomy at NYITCOM, and Christopher Hoehmann, a third-year medical student there. In their research, the authors studied the arteries of 48 cadavers to determine risk factors for atherosclerosis, sampling 13 arterial segments from each of the donated cadavers, including segments of carotid, central and peripheral arteries.

“It is very gratifying to combine the work perspectives of an analytical anatomist with those of a physician and a medical student to leverage synergies and discover outcomes that can be applied in a clinical setting”, said Beatty.

Specifically, the researchers utilized histopathology to confirm as well as expand the search for correlations among arteries compared to other arteries that may associate with ischemic diseases. To investigate the distribution of atherosclerosis in various arteries throughout the body, they sampled segments from the carotid arteries and from peripheral vessels and compared them to clinically relevant central arteries of the torso.

Importantly, the NYITCOM study demonstrates that the radial artery, a peripheral vessel, exhibited a positive correlation between both the pathologic left coronary and bifurcation of the carotid arteries. As such, they propose investigating the radial artery as a clinically accessible location to monitor with ultrasound when assessing a patient’s risk for ischemic cardiovascular disease. Further studies should be carried out evaluating the clinical utility of radial artery ultrasonography to assess cardiovascular risk.