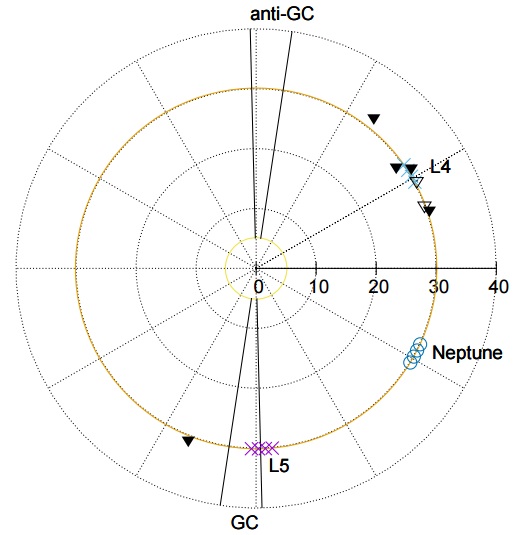 The spatial distribution of all PS1 detected Trojans. The solid triangles are the newly discovered Neptune Trojans, and open triangles are the known ones detected by PS1. The positions of Neptune Trojans correspond to their first detections of PS1. The blue circles show the locations of Neptune from 2010 to 2013, and the crosses show the corresponding Lagrange points. Notice that the Galactic Center (GC) overlapped with L5 during 2010 to 2012. Credit: Lin et al., 2016.

An international team of astronomers led by Hsing-Wen Lin of the National Central University in Taiwan has detected five new so-called “Neptune trojans” – minor bodies sharing the same orbit as the planet Neptune. The discovery was made by the Pan-STARRS 1 (PS1) survey and is described in a paper published Sept. 15 on arXiv.org.

The PS1 survey, which utilizes the first Pan-STARRS (Panoramic Survey Telescope and Rapid Response System) telescope in Hawaii, designated PS1, is one of the best tools to search for Neptune trojans. The survey, lasting from May 2010 to May 2014, has made a strong contribution to knowledge of the solar system’s minor bodies due to its very wide survey area and its optimized cadence for searching moving objects.

“PS1 survey has a very wide survey area that is deep enough to cover a large part of the Neptune trojan cloud. PS1 currently is the only one with the capability to detect several Neptune trojans in a single survey,” Lin told Phys.org.

The researchers found four new L4 trojans, meaning that they orbit Neptune’s L4 Lagrangian point 60 degrees ahead of Neptune; they also found one L5 trojan – orbiting the L5 region 60 degrees behind the planet. The newly detected objects have sizes ranging from 100 to 200 kilometers in diameter.

What drew the attention of the astronomers is the fact that the new L5 trojan is dynamically more unstable than the other four, indicating that it could be temporarily captured into the Neptune trojan cloud.

“There is a dynamically unstable zone between 10 and 18 degrees inclination, but the real reason for two groups of trojan is still unknown,” Lin said.

Lin noted that the PS1 trojan database could provide many new important discoveries in the future as it is the first large enough dataset from a single survey, and therefore very good for probing the orbital distribution of Neptune trojan population. So far, the PS1 data allowed the team to find that the trojan cloud is wide in orbital inclination space, but not as wide as previously thought. The inclination width of trojan cloud is important because the different width could apply to different formation scenario of trojans.

However, the researchers are currently focusing on obtaining the colors of the newly detected Neptune trojans, which could help them confirm the existence of two groups of trojans.

“Currently, the PS1 data do not have good color measurements for these new trojans, but the additional color information could be important to understand if there are really two group of trojans,” Lin said.