Researchers in UConn’s Institute of Materials Science significantly improved the performance of an atomically thin semiconductor material by stretching it, an accomplishment that could prove beneficial to engineers designing the next generation of flexible electronics, nano devices, and optical sensors.

In a study appearing in the research journal Nano Letters, Michael Pettes, assistant professor of mechanical engineering, reports that a six-atom thick bilayer of tungsten diselenide exhibited a 100-fold increase in photoluminescence when it was subjected to strain. The material had never exhibited such photoluminescence before.

The findings mark the first time scientists have been able to conclusively show that the properties of atomically thin materials can be mechanically manipulated to enhance their performance, Pettes says. Such capabilities could lead to faster computer processors and more efficient sensors.

The process the researchers used to achieve the outcome is also significant in that it offers a reliable new methodology for measuring the impact of strain on ultrathin materials, something that has been difficult to do and a hindrance to innovation.

“Experiments involving strain are often criticized since the strain experienced by these atomically thin materials is difficult to determine and often speculated as being incorrect,” says Pettes. “Our study provides a new methodology for conducting strain-dependent measurements of ultrathin materials, and this is important because strain is predicted to offer orders of magnitude changes in the properties of these materials across many different scientific fields.” 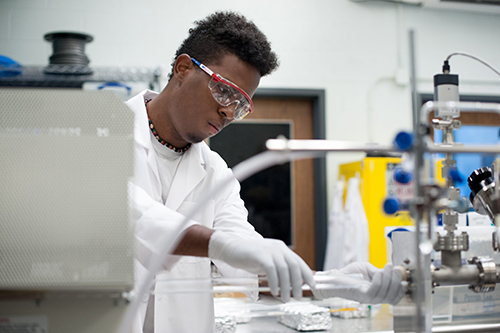 Scientists have been intrigued by the potential of atomically thin materials ever since researchers Andre Geim and Konstantin Novoselov successfully cleaved a one-atom thick layer of graphene from a piece of graphite in 2004. Considered a supermaterial for its outstanding strength, flexibility, and ability to conduct electricity, two-dimensional graphene transformed the electronics industry and earned the researchers a Nobel Prize.

But for all that it offers, graphene has its limitations. It is a poor semiconductor because it lacks an electron band gap in its internal structure. As a result, electrons are unimpeded and flow rapidly through it when the material is energized. The best semiconductor materials, such as silicon, have a sizable band gap that allows a flow of electrons to be turned on and off. That capability is vital for creating the strings of zeros and ones that make up the binary computing codes used in transistors and integrated circuits.

Materials scientists are exploring the potential of other two-dimensional and atomically thin materials hoping to find products superior to graphene and silicon.

Strain engineering has been discussed as one possible way to enhance the performance of these materials, because their ultrathin structure makes them particularly susceptible to bending and stretching, unlike their larger three-dimensional bulk forms. But testing the impact of strain on materials just a few atoms thick has proven enormously difficult.

In the present study, Pettes and Wei Wu, a Ph.D. student in Pettes’ lab and the study’s lead author, were able to successfully measure the influence of strain on a single crystalline bilayer of tungsten diselenide by first encapsulating it in a fine layer of acrylic glass and then heating it in an argon gas chamber. (Exposure to air would destroy the sample). This thermal processing strengthened the material’s adhesion to a polymer substrate, allowing for a near perfect transfer of applied strain, which has been difficult to achieve in prior experiments. 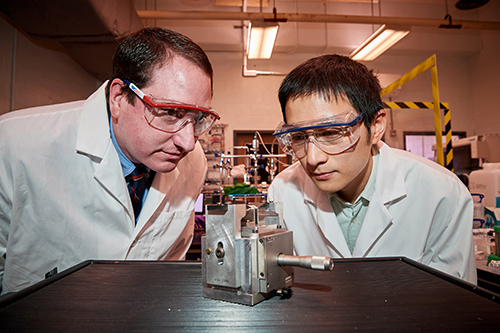 The group then customized a bending device that allowed them to carefully increase strain on the material while monitoring how it responded through a Horiba Multiline Raman Spectrometer at the Harvard Center for Nanoscale Systems, a shared user facility funded by the National Science Foundation.

It was an exciting moment.

“Our new method allowed us to apply around two times more strain to the 2-D material than any previous study has reported,” says Pettes. “Essentially, we were in new territory.”

Ultimately, the researchers found that applying increasing levels of strain to the material altered its flow of electrons, which was reflected by the increased intensity in photoluminescence.

Working with computer modeling expert Avinash Dongare, an assistant professor of materials science and engineering at UConn, and former Ph.D. student Jin Wang, the team was able to show that their process could, theoretically, manipulate the band gap of tungsten diselenide and other atomically thin materials, which is extremely important for design engineers seeking faster and more efficient semiconductors and sensors. Manipulating a semiconductor with an indirect band gap very near the point of transitioning to a direct band gap could lead to extremely fast processing capabilities.

“This is the first time that extrinsic control over an indirect-to-direct electron band gap transition has been conclusively reported,” says Pettes. “Our findings should allow computational scientists using artificial intelligence to design new materials with extremely strain-resistant or strain-sensitive structures. That is extremely important for the next generation of high-performance flexible nanoelectronics and optoelectronic devices.”

The U.S. Army Research Laboratory in Adelphi, Maryland provided graphene films that were used to confirm the calibration standards applied by the UConn researchers to measure strain. The atomic-level thickness of the tungsten diselenide bilayer was confirmed through transmission electron microscopy in the Molecular Foundry at Lawrence Berkeley National Laboratory.