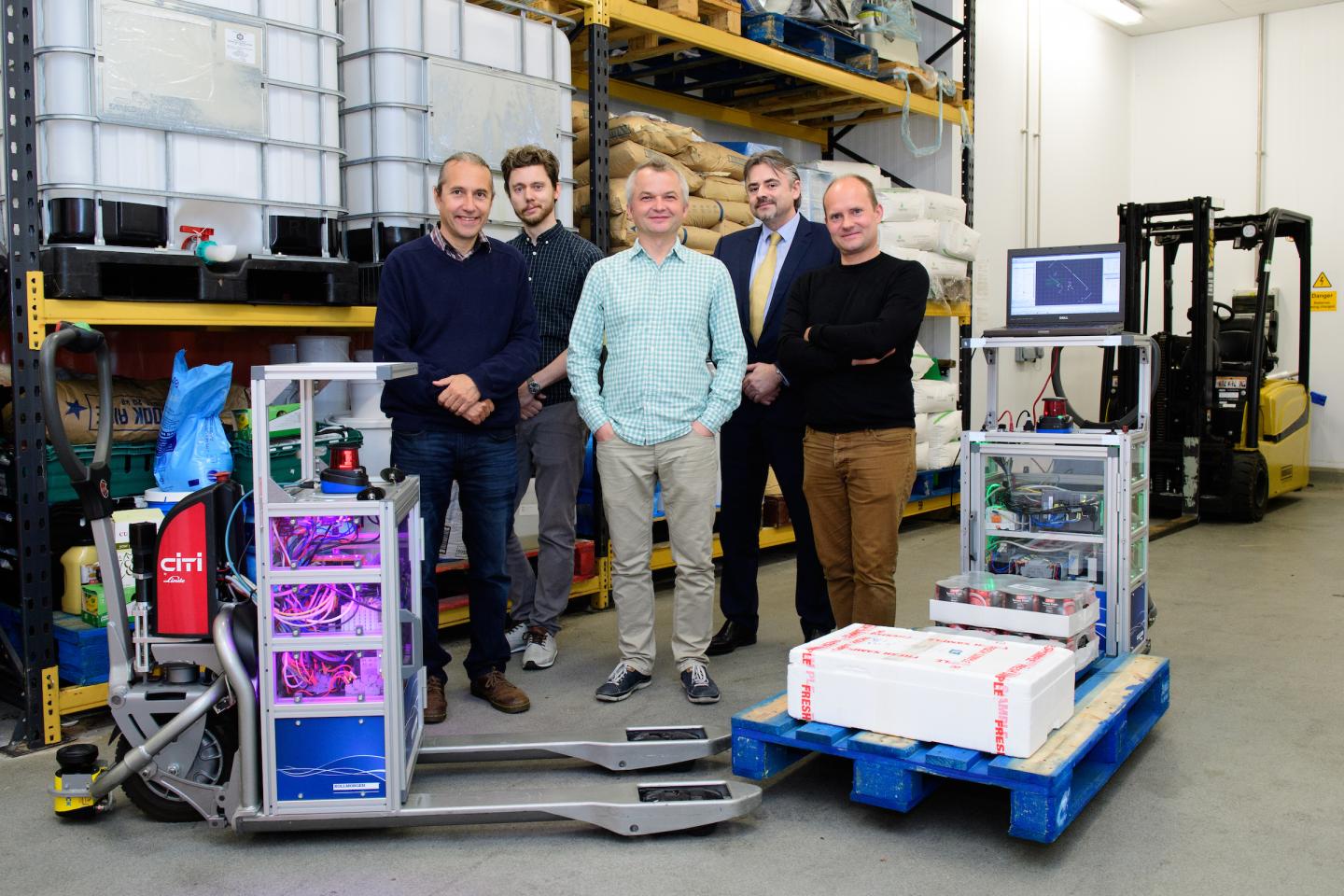 Scientists are working to develop new fleets of autonomous ‘self-optimising’ forklift trucks which can operate safely and efficiently in warehouses alongside human co-workers, and automatically adapt to changing work demands.

The goal of the project, a multinational collaboration between robotics specialists in the UK, Sweden, Italy and Germany, is to enable deployment of next generation automated guided vehicles (AGVs) into current warehouse facilities to support tasks such as packing, palletising and transporting goods.

ILIAD will deliver significant technological advances into a single integrated system ready for easy, low-cost deployment and without the need for major infrastructure investments. A key requirement is that each robot is ‘human aware’ – equipped with advanced computer vision and artificial intelligence to detect, track and predict the behaviour of humans and to plan movements based on the machines’ own observations of warehouse lay-outs and patterns of activity.

Crucially, each robotic vehicle will be self-optimising, learning from self-collected data over time, making the fleets fully scalable with the option of adding or removing robots at any time.

While the aim is to develop a reliable robotic solution flexible enough to support intra-logistics in many different industries, the researchers will use the fresh food sector as their development setting. This is due to the industry’s particularly challenging requirements: short shelf life of products, need for complete traceability, high cost of wastage, and pressure for rapid responses to changing market needs.

The food industry is the largest manufacturing sector in Europe with an annual turnover of a trillion Euros, supporting more than four million jobs. The UK food industry is worth £100bn to the UK economy annually.

In their contribution to the project, the Lincoln team will focus on long-term operation of the ILIAD system, including maintenance of environment maps over time, and learning and predicting activity patterns of human co-workers.

They will also develop qualitative models for human-robot spatial interaction, systems architecture and systems integration. The work will include experimental testing at University of Lincoln’s National Centre for Food Manufacturing in Holbeach, Lincolnshire.

Professor Tom Duckett is Director of the Lincoln Centre for Autonomous Systems (L-CAS) at University of Lincoln and a Principal Investigator on the ILIAD project: “Our goal is to deliver an economical, flexible robotic solution that can be easily deployed and integrated into current warehouse facilities and which guarantees efficient and safe operation in environments shared with humans.

“The project will push the state-of-the-art in human-robot interaction, overcoming persistent barriers to greater adoption of automation in logistics operations in many industries, starting with the food sector.

“The fleets will be self-deploying and self-optimising, removing much of the capital cost and disruption of introducing robotic technologies. Most importantly, though, we will show that autonomous vehicles can operate safely and efficiently alongside human co-workers and human driven vehicles in complex, dynamic warehouse settings.”

Mark Swainson, Lead for Research at the University of Lincoln’s National Centre for Food Manufacturing, said: “The massive scale of food volumes moved by the sector means that being able to do this quickly and efficiently can make the difference between business success or failure.

“Movement costs “per pallet” and “per case” are tracked as Key Performance Indicators in most warehousing and distribution operations. Robots seamlessly integrating alongside humans, often working collaboratively, will unlock significant productivity advances in the sector while also serving to help address anticipated challenges resulting from increased competition and escalating operating costs over the coming years.”

He said: “In addition to the development of self-deploying and self-optimising fleets of autonomous vehicles that are able to unwrap pallets and manipulate stacked goods, this project is crucially interested in safety and the collaboration of robot and humans. Safety is addressed by developing means of highly reliable human detection and tracking, and a systematic integration of safety considerations into the ILIAD system.”