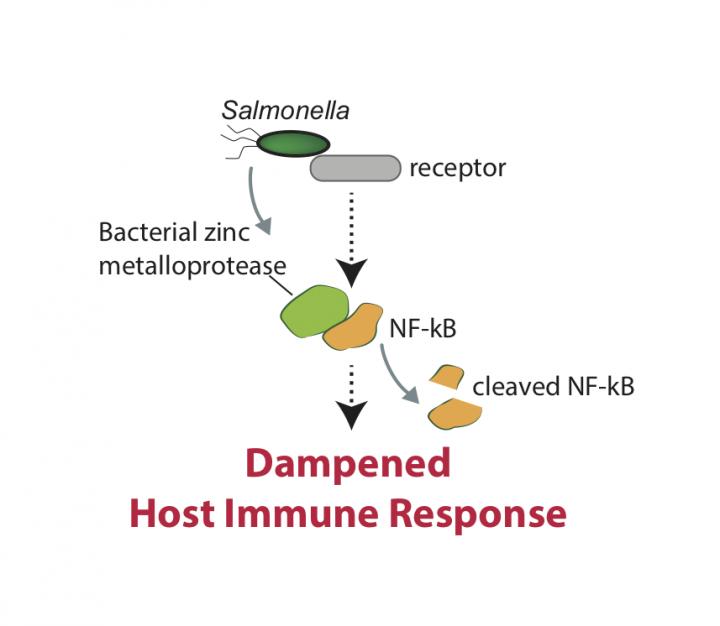 During infection, Salmonella delivers a family of zinc metalloprotease effector proteins (green) into host cells, sabotaging the host immune response. These effectors interact with and then cut a subset of host NF-kB transcription factors (yellow), which are proteins that normally function to turn on immune-related genes following the detection of the pathogen. Credit: Teresa Thurston

Infections with Salmonella bacteria, often caused by eating or handling undercooked meat or eggs, affect about 100 million people a year worldwide. The suffering the infection causes – abdominal cramps, fever and diarrhea – is the result of an extremely precise set of molecular interactions between the bacterium and the infected human’s cells. In a new study published in the Journal of Biological Chemistry, researchers at Imperial College London and the Francis Crick Institute report some of the details of how Salmonella shuts down an immune pathway after infection.

When a pathogen like Salmonella enterica infects a cell, the cell activates a series of signals, culminating in certain genes being turned on to activate protective immune responses. One group of proteins that turn on immune-related genes is known as the NF-?B transcription factors. Salmonella, however, produces its own set of proteins that stop this from happening.

“These (bacterial proteins) function as a molecular pair of scissors, cutting up NF-kappaB transcription factors and thereby sabotaging the infected cells’ immune response,” said Teresa Thurston, the investigator at Imperial who oversaw the work.

These sabotage proteins, collectively called zinc metalloprotease effector proteins, act surprisingly delicately for saboteurs. In the human cells that Salmonella enterica infects, there are five different types of NF-kappaB proteins, but the Salmonella effectors cut up only three of them, leaving the other two untouched.

“The interaction between the host and the pathogen is very complex,” Thurston said. “So what I think this selectivity means is that (the bacterial proteins) are able to affect a particular arm of the immune response while keeping other arms untouched. And, in that way, they’re really fine-tuning the host immune response rather than having a blanket bomb-out effect.”

Thurston’s team, led by graduate student Elliott Jennings, wanted to understand how these bacterial proteins were able to behave so accurately on a molecular level. To do so, the team produced a detailed 3-D structure of one of them, both alone and in complex with a human NF-kappaB protein.

They found a sophisticated mechanism of molecular sabotage. The NF-kappaB transcription factors do their job of turning on immune system genes by binding to DNA at specific locations. The Salmonella effector proteins take on the approximate shape and electrical charge of the DNA backbone, essentially tricking NF-kappaB proteins to stick to them instead; once this happens, the Salmonella protein cuts up the NF-kappaB protein.

The precision with which this occurs – targeting only three out of five NF-kappaB proteins – is strongly determined by the way the bacterial effectors interact with a single amino acid in the targeted NF-kappaB proteins.

“With a single change in the amino acid sequence, we could create a target that could no longer be cut,” Thurston said. “Also vice versa: After changing just one amino acid, (the effector) was then able to cleave a protein that was not normally targeted.”

In other words, the bacterial proteins distinguish between the human proteins based on just one specific amino acid.

Together, these findings contribute to a complex picture of how Salmonella runs roughshod over its human host by carefully breaking key molecules in immune signaling pathways.

“Maybe once we have a complete picture of how bacteria get one over their hosts, we can shift the balance in favor of the host,” Thurston said. “In the case of Salmonella infection, this could be important, as many of the fatalities are associated with immune-compromised patients.”