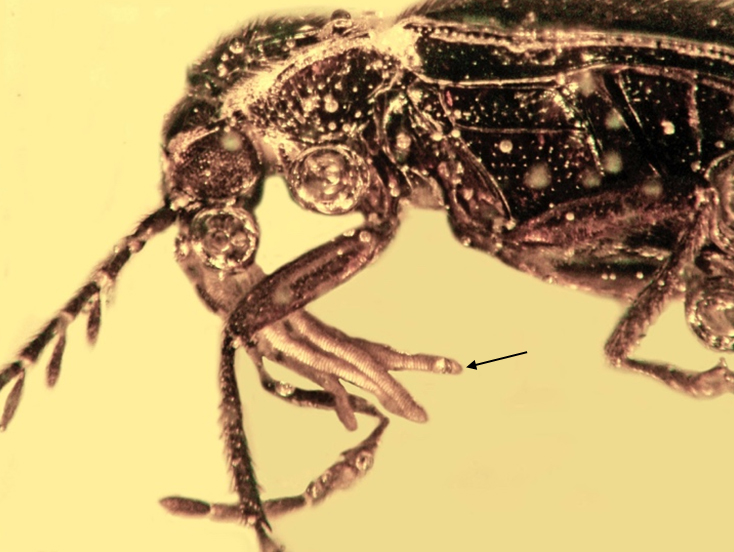 This is a fossil ptilodactyline beetle found in amber from Mexico. The black arrow points to pollinia attached to the beetle’s mouthparts. Credit: Entomological Society of America

When most people hear the word “pollinator,” they think of bees and butterflies. However, certain beetles are known to pollinate plants as well, and new fossil evidence indicates that they were doing so 20 million years ago.

“My paper points out that beetles may play a more important role in pollinating orchids than originally thought, and that they have been doing so for some 20 million years,” Poinar said.

Some present-day beetles use orchids for nectar, but no fossil evidence has ever been found showing beetles in the evolutionary past pollinating orchids — until now.

The first specimen was a hidden-snout beetle (subfamily Cryptorhynchinae) found in amber from the Dominican Republic. This Dominican specimen had pollinaria from an orchid described as Cylindrocites browni attached to its thorax. The other specimen was a toe-winged beetle (family Ptilodactylidae) that was found in amber from Mexico. This toe-winged beetle had pollinaria from an orchid described as Annulites mexicana attached to its mouthparts.

According to Poinar, the reason may lie in the beetles’ secretive behavior, which makes it difficult to collect data about them.

“While no present-day cryptorhynchid weevils or ptilodactyline beetles are known to carry pollinaria, past and future collections of these and other beetles should be examined to search for attached pollinaria,” Poinar said. “Orchids may have evolved beneficial associations with a much wider range of beetles and other insects than we thought possible.”