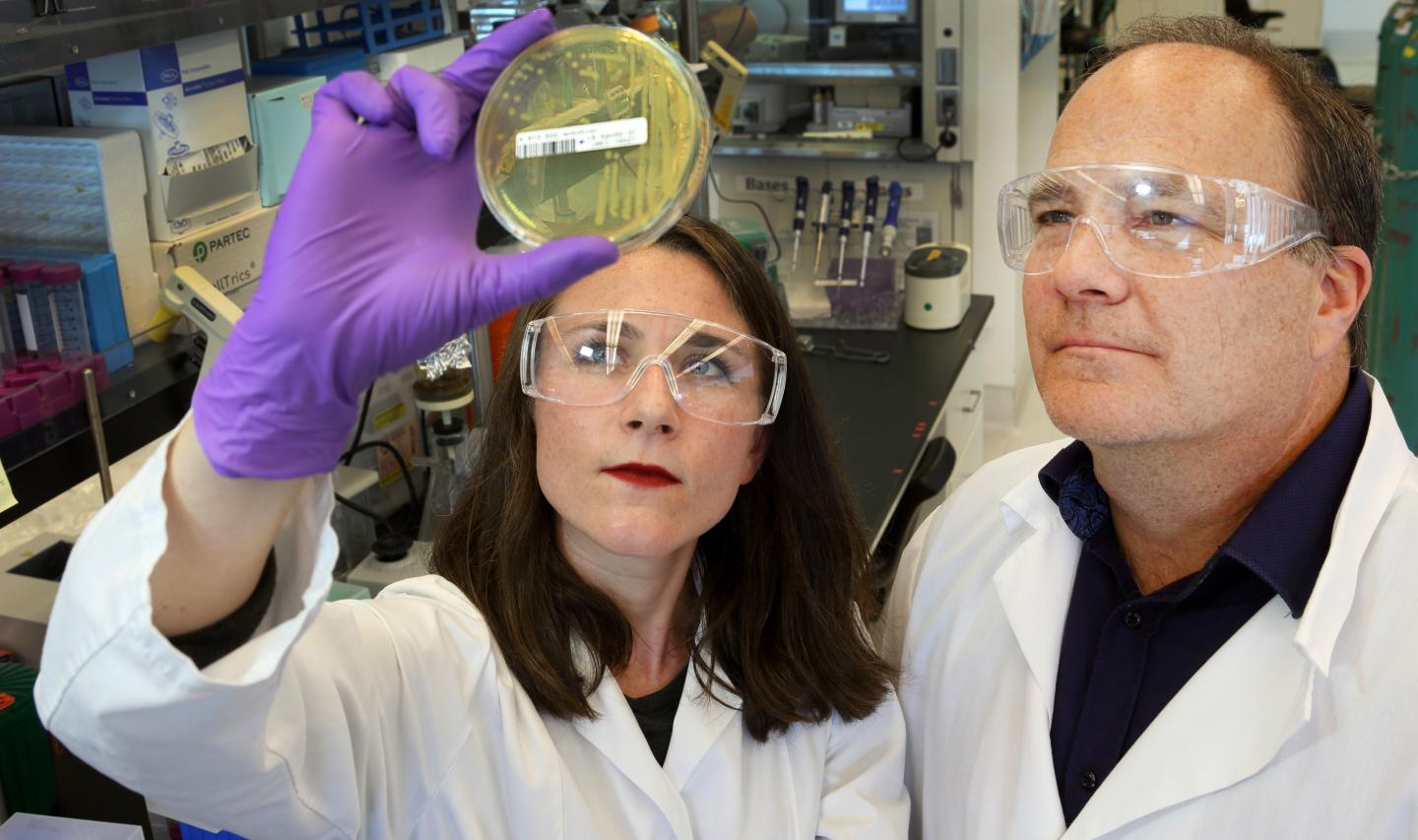 A recent discovery by Sandia National Laboratories researchers may unlock the potential of biofuel waste — and ultimately make biofuels competitive with petroleum.

Fuel made from plants is much more expensive than petroleum, but one way to decrease the cost would be to sell products made from lignin, the plant waste left over from biofuel production.

Lignin typically is either burned to produce electricity or left unused in piles because no one has yet determined how to convert it into useful products, such as renewable plastics, fabrics, nylon and adhesives. The electricity isn’t even available to the general public; it’s only used by companies that create large amounts of lignin, like pulp and paper manufacturers. Now Sandia scientists, working with researchers from Lawrence Berkeley National Laboratory at the Joint BioEnergy Institute, have decoded the structure and behavior of LigM, an enzyme that breaks down molecules derived from lignin.

The group’s work on LigM appears in the latest issue of the Proceedings of the National Academy of Sciences. The enzyme has little in common with other, better understood proteins, which previously made it impossible for scientists to guess how it functions. This paper marks the first time anyone has solved the structure of LigM, opening a path toward new molecules and new, marketable products.

For decades, scientists have wrestled with the problem of breaking down lignin, the part of plant cell walls that provides structure and protection from bacterial and insect attacks. This strength also makes lignin difficult to deconstruct, though there have been recent breakthroughs.

The plant matter used to produce ethanol can be chemically or physically pre-treated so that the lignin is deconstructed in the process. However, these methods can be expensive and reduce the amount of biofuel that can be harvested. They could also interfere with later-stage lignin harvesting. That’s why some researchers are focused on finding enzymes that convert lignin naturally and gently.

Sandia scientist and lead author Amanda Kohler said her team knew enzymes could metabolize lignin and its derivatives because there are decades-old records of bacteria using enzymes for this purpose. Sphingonomas bacteria was discovered living in the waste water of a pulp mill more than 30 years ago. Once researchers realized the bacterium’s unique enzymatic pathways enabled it to live on lignin, their challenge was then to understand the enzymes in these pathways so they could mimic what nature had already done, and use that understanding productively.

Kohler and her team focused on LigM, an enzyme used by Sphingomonas, because it performs a key step in the conversion of lignin derivatives and it is the simplest of the known enzyme systems that perform this function. “When trying to mimic natural systems in a laboratory setting, the simplest, most direct systems are the best,” Kohler explained.

The team found that half of LigM’s structure is composed of a common protein architecture found in all forms of life, from bacteria to humans. The rest of the enzyme — the active portion — is not found in any other known protein structure. This unique structure gives LigM the ability to bind specifically to molecules derived from lignin.

“Solving the structure allows us to understand how the organism may have evolved its unique function, which I think is scientifically one of the most interesting findings,” said paper co-author and Sandia scientist Ken Sale. The team used the Advanced Light Source Synchrotron at Lawrence Berkeley National Laboratories, along with high-performance computing and fundamental biochemistry to gain their insights into LigM.

LigM is designed to break down lignin derivatives, not lignin itself. It is important to understand that LigM’s function is only one key step in a longer pathway of reactions needed to fully deconstruct lignin. One active area of research involves finding other organisms, possibly fungi, that can execute the first step of breaking down large lignin mass into smaller fragments. Some of the Sandia scientists who solved LigM’s structure, Sale and Matthew Mills, have recently learned more about another enzyme that helps drive the breakdown of lignin into smaller fragments.

LigM works on a later stage in the process, when smaller lignin fragments already have been converted into a molecule called vanillic acid. “There is still work to be done to figure out the whole reaction pathway,” Kohler says. “But now we have a much-needed understanding of a key step in this process, and are developing enzymes to fit our end goals of lowering the cost of biofuels by making products from lignin.”