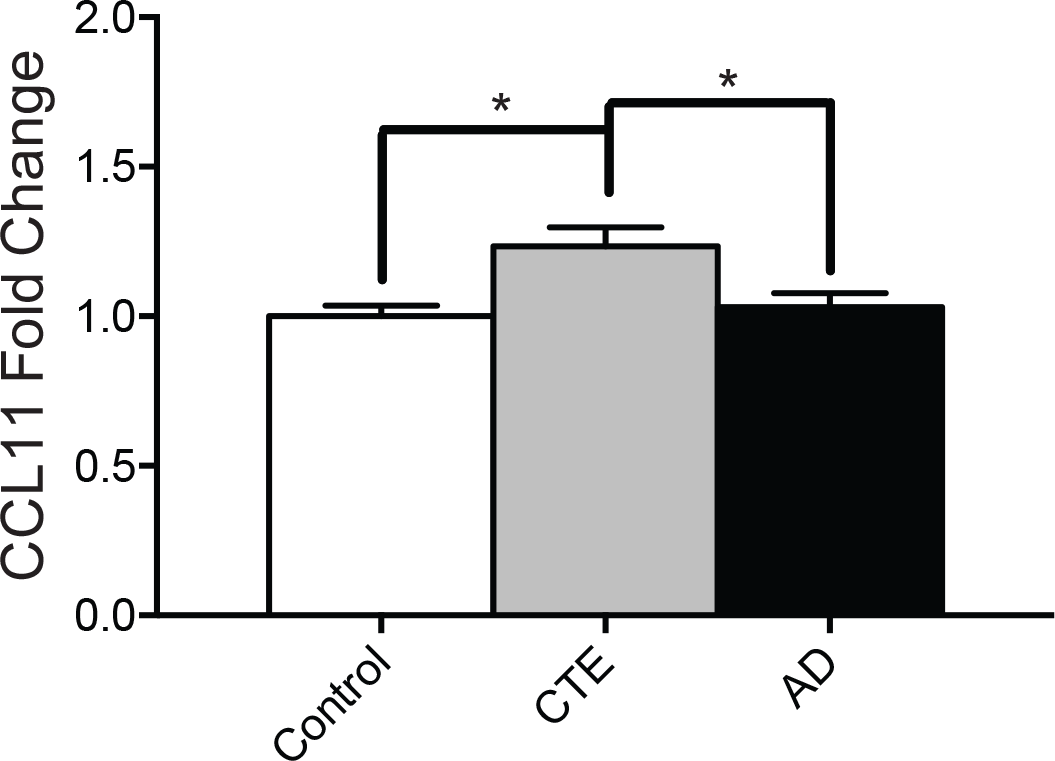 Boston University researchers have identified a biomarker that may allow chronic traumatic encephalopathy (CTE) to be diagnosed during life. It might also help distinguish CTE from Alzheimer’s disease, which presents with similar symptoms, even at the protein level.

Cherry, neuroscience and CTE expert Ann McKee, and their team studied the brains of 23 former college and professional football players with post-mortem-confirmed CTE. The researchers compared them with the brains of 50 non-athletes with diagnosed Alzheimer’s disease, as well as 18 non-athlete controls.

Analysis demonstrated that levels of the biomarker protein CCL11 were significantly elevated in the brains of those with CTE, but considered normal in the brains of individuals who had Alzheimer’s and the controls. Additionally, increased CCL11 fold changes were linked to a greater number of total years spent playing football.

CCL11 levels were much higher in individuals with more than 16 years of exposure to football play than those with less than 16 years’ exposure, as well as those with no exposure. This is especially interesting in light of a study released Sept. 19 that suggests children exposed to tackle football before the age of 12 are two to three times more likely to develop emotional and/or behavioral issues later in life, compared with individuals who began playing the sport at 12 years or older.

“While both the blood and CSF can reflect changes occurring in the brain, the CSF is of special interest due [to] its mechanistic function and dynamic relationship with the brain,” the researchers’ paper in PLOS ONE reads. “The CSF is in continuity with the interstitial space and plays a role in the glymphatic clearance of solutes. Thus, it may be an important compartment to identify neuropathological changes, and several CSF biomarkers are already in development.”

Still, Cherry, McKee and their Boston University colleagues say additional studies are needed to determine whether increased levels of CCL11 are an early or late finding in the CTE disease process, and whether CCL11 levels might be able to predict the severity of an individual’s disease. They conclude that, ultimately, no one biomarker may be adequate for proper identification of CTE.

“CCL11 will likely be most useful as one biomarker in a panel of multiple biomarkers that can capture multiple aspects of a diverse range of neuropathologies,” the paper reads. “This suggests that utilizing CCL11 in combination with imaging biomarkers like amyloid and tau PET scans, in addition to fluid biomarkers, would be ideal for the most sensitive and specific diagnostics of CTE.”

Indeed MRI-based techniques such as diffusion tensor imaging have already been used to identify white matter abnormalities; and PET imaging has been used to observe proteins such as tau in living brains.

In February 2016, a group led by Bennet Omalu, the doctor credited with discovering CTE, reported they were making strides toward identifying the disease in living brains using on a chemical marker. FDDNP, a chemical marker previously created by Gary Small and Jorge Barrio for assessing neurological changes associated with Alzheimer’s disease, binds to deposits of amyloid beta plaques and tau tangles—the hallmarks of both Alzheimer’s and CTE. The researchers used PET imaging to perform brain scans on living players after they received intravenous injections of FDDNP. Compared to healthy men, NFL players had elevated levels of FDDNP in the amygdala and subcortical regions of the brain.