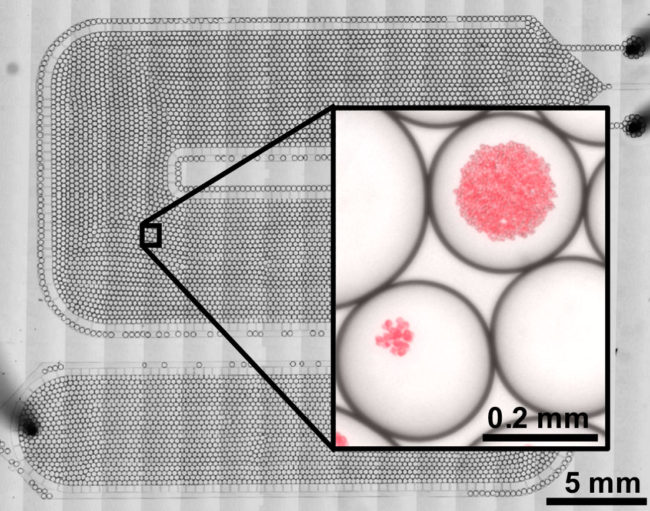 Scientists may have taken the next step in using algae as a viable option for renewable fuels.

Researchers from Texas A&M and the Boyce Thompson Institute (BTI) have developed new technology that includes algal droplet bioreactors on a chip that may aid in the search for the perfect algal strain to be used for renewable energy.

In the study, the researchers captured a single algal cell in a tiny droplet of water encapsulated by oil and then squeezed millions of algal droplets onto a chip about the size of a quarter.

Each droplet is a micro-bioreactor—a highly controlled environment where algal cells can grow and replicate for several days, forming a genetically homogenous colony that goes through its typical biological reactions such as the production of lipids.

“This is the first microsystem that allows both lipid content analysis and growth rate measurement at high throughput, whereas previous work could only do one or the other,” senior author and engineer, Arum Han of Texas A&M University, said in a statement.

The researchers validated the chip system with algae known to grow faster or slower or produce more or less lipid. They then screened 200,000 chemically mutated cells and identified six mutants with both faster growth and higher lipid content.

The researchers then recovered and verified off-chip all mutants with potential for improved growth or lipid production.

However, the researchers still want to find more mutants to find the super strain.

“The most extraordinary variants will be found in one in a million, or ten million, so the throughput needs to be accelerated,” senior biologist and BTI President, David Stern, said in a statement.

Researchers have long sought algae as a way to produce renewable fuel but have often fallen short.

While algae replicates quickly and requires only water and sunlight to accumulate to massive amounts, producing commercial-scale renewable energy from algae has proven difficult.

Scientists have been attempting to identify a super algal strain that can reproduce faster and produce more lipid per cell.

Earlier this year, ExxonMobil discovered a strain with a single genetic modification that allows for twice as much lipid production per cell.

The researchers believe there are thousands of genes that hold potential to produce more lipid production.

Modern gene-editing technologies provide an easier way to modify algal genes. However, identifying which genes to target is both time-consuming and expensive.

By exposing an algal culture to a mutagen, researchers can yield millions of potentially improved algal cells that must each be tested for expression of a desired trait, including increased lipid production. Mutated genes can also then be identified through whole-genome sequencing.

“The important thing is to develop a tool that can screen millions of cells in a much shorter time frame and a smaller space,” author and BTI post-doc, Shih-Chi Hsu, said in a statement. “In a chip housing millions of droplets of cells, each droplet is like a flask or a bioreactor, and that’s how we can get results faster from just a tiny chip.”

The study was published in Plant Direct.