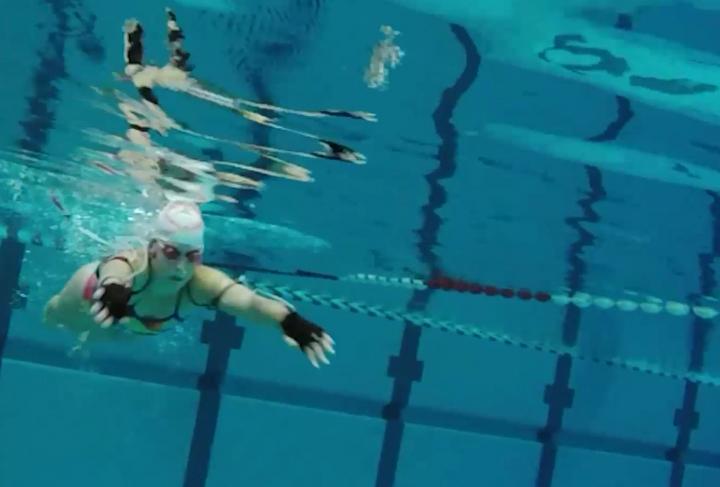 The new system sets changes in water flow pressure while swimming into sounds — in real time. Athletes can use this information to hone their own swimming technique. Source: Photo: CITEC/Bielefeld University

Since 1896, swimming has been an event in the Olympic games. Back then it was the swimmer’s physical condition that was decisive in securing a win, but today it is mostly technique that determines who takes home the title of world champion. Researchers at Bielefeld University have developed a system that professional swimmers can use to optimize their swimming technique. The system expands the athlete’s perception and feel for the water by enabling them to hear, in real time, how the pressure of the water flows created by the swimmer changes with their movements. This gives the swimmer an advantage over his competitors because he can refine the execution of his technique. This “Swimming Sonification” system was developed at the Cluster of Excellence Cognitive Interaction Technology (CITEC) of Bielefeld University. In a video, Bielefeld University’s own “research_tv” reports on the new system.

“Swimmers see the movements of their hands. They also feel how the water glides over their hands, and they sense how quickly they are moving forwards. However, the majority of swimmers are not very aware of one significant factor: how the pressure exerted by the flow of the water on their bodies changes,” says Dr. Thomas Hermann of the Cluster of Excellence Cognitive Interaction Technology (CITEC). The sound researcher is working on converting data into sounds that can be used to benefit the listener. This is called sonification, a process in which measured data values are systematically turned into audible sounds and noises. “In this project, we are using the pressure from water flows as the data source,” says Hermann, who heads CITEC research group Ambient Intelligence. “We convert into sound how the pressure of water flows changes while swimming – in real time. We play the sounds to the swimmer over headphones so that they can then adjust their movements based on what they hear,” explains Hermann.

For this research project on swimming sonification, Dr. Hermann is working together with Dr. Bodo Ungerechts of the Faculty of Psychology and Sports Science. As a biomechanist, Dr. Ungerechts deals with how human beings control their movements, particularly with swimming. “If a swimmer registers how the flow pressure changes by hearing, he can better judge, for instance, how he can produce more thrust at similar energy costs. This give the swimmer a more encompassing perception for his movements in the water,” says Dr. Ungerechts. The researcher even tested the system out for himself. “I was surprised at just how well the sonification and the effects of the water flow, which I felt myself, corresponded with one another,” he says. The system is intuitive and easy to use. “You immediately starts playing with the sounds to hear, for example, what tonal effect spreading your fingers apart or changing the position of your hand has,” says Ungerechts. The new system should open up new training possibilities for athletes. “By using this system, swimmers develop a harmony – a kind of melody. If a swimmer very quickly masters a lap, they can use the recording of the melody to mentally re-imagine and retrace the successful execution of this lap. This mental training can also help athletes perform successfully in competitions.” To this, Thomas Hermann adds “the ear is great at perceiving rhythm and changes in rhythm. In this way, swimmers can find their own rhythm and use this to orient themselves in the water.”

This system includes two gloves with thin tube ends that serve as pressure sensors and are fixed between the fingers. The swimmer wears these gloves during practice. The tubes are linked to a measuring instrument, which is currently connected to the swimmer via a line while he or she is swimming. The measuring device transmits data about water flow pressure to a laptop. A custom-made software then sonifies the data, meaning that it turns the information into sound. “During repeated hand actions, for instance, the system can make rising and sinking flow pressure audible as increasing or decreasing tonal pitches,” says Thomas Hermann. Other settings that sonify features such as symmetry or steadiness can also be activated as needed.

The sounds are transmitted to the swimmer in real time over headphones. When the swimmer modifies a movement, he hears live how this also changes the sound. With the sonification of aquatic flow pressure, the swimmer can now practice the front crawl in way that, for instance, both hands displace the water masses with the same water flow form – to do this, the swimmer just has make sure that he generates the same sound pattern with each hand. Because the coach also hears the sounds over speakers, he can base the instructions he gives to the swimmer not only on the movements he observes, but also on the sounds generated by the swimmer and their rhythm (e.g. “Move your hands so that the tonal pitch increases faster”).

For this sonification project, Thomas Hermann and Bodo Ungerechts are working with Daniel Cesarini, Ph.D., a researcher from the Department of Information Engineering at the University of Pisa in Italy. Dr. Cesarini developed the measuring device that analyzes the aquatic flow pressure data.

In a practical workshop held in September 2015, professional swimmers tested the system out and confirmed that it indeed helped them to optimize their swimming technique. Of the 10 swimmers who participated, three of them qualify for international competitions, and one of the female swimmers is competing this year at the Paralympics in Rio de Janeiro, Brazil. The workshop was funded by the Cluster of Excellence Cognitive Interaction Technology (CITEC). In addition to this, swim teams at the PSV Eindhoven (Philips Sports Union Eindhoven) in the Netherlands tested the new system out for two months, using it as part of their technique training sessions. The PSV swim club competes in the top swimming league in the Netherlands.

“It is advantageous for swimmers to receive immediate feedback on their swimming form,” says Thomas Hermann. “People learn more quickly when they get direct feedback because they can immediately test how the feedback – in this case, the sound – changes when they try out something new.”

The researchers want to continue developing their current prototype. “We are planning to develop a wearable system that can be used independently by the user, without the help of others,” says Thomas Hermann. In addition to this, the new sonification method is planned to be incorporated into long-term training programs in cooperation with swim clubs.