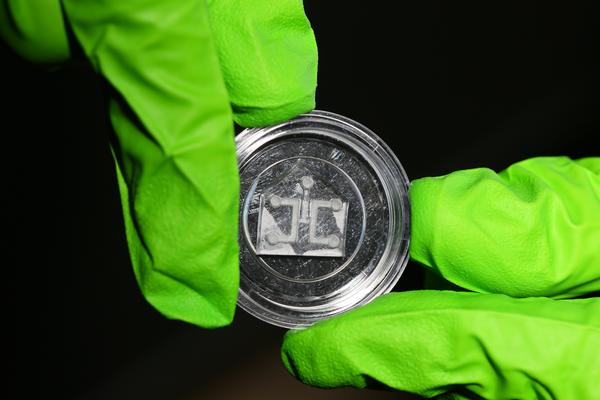 Biosensors are devices that can detect biological molecules (“analytes”) in air, water, or blood. They are used widely in drug development, medical diagnostics, biological research, and even security. Despite ongoing advancments, there remains a need for improved portable biosensing devices that are easy to use for both doctors and patients. The development of such devices would offer methods for continuous, real-time monitoring of biomarker levels, which is important for a number of diseases such as diabetes.

This is where Edward Honein’s summer project comes in: he is developing an optical, microfluidic biosensor that can detect single biomolecules in a scalable, high-throughput manner.

The biosensor itself is made up of carbon nanotubes, which are rolled-up sheets of graphene. Nanotubes have diameters as small as 1 nanometer and lengths up to several centimeters, and their unique physical properties have opened up a whole new world of technologies. One of these properties is emitting light in the near-infrared spectrum (700 – 2500 nm wavelength) when excited with a laser.

Honein’s project draws from the research of Professor Ardemis Boghossian, who heads the lab and combines nanotube optics and biological molecules to explore a range of emerging capabilities, including near-infrared biosensing. In her research, Boghossian has developed nanotubes wrapped with single-stranded DNA, which acts as the actual sensing molecule for the target analyte.

“In our applications we use semiconducting nanotubes that have a specifc energy barrier, called the ‘band gap’,” says Honein. “When we excite the nanotubes with a laser, an electron is excited across this barrier into the conductance band. Eventually this electron relaxes, and in doing so releases a photon – which is what we see as emitted light.”

When the DNA – or a protein – detects the presence of a target molecule in the vicinity of a carbon nanotube, the resulting interaction changes the 3D conformation of the DNA or protein, which subsequently affects the surface properties of the nanotube. These modifications impact the near-infrared light emitted by the nanotube and changes its signal.

Honein is now trying to streamline the biosensor to make it scalable for commercial use. This entails a lot of work: first to construct the biosensor, then to characterize the sensor’s sensitivity and selectivity, and finally to integrate the sensor into a working device. One possibility he is exploring is using DNA-wrapped nanotubes that have beem immobilized into a gel, and then incorporating this gel into a microfluidic device.

“When you add your analyte, the signal of the emitted light changes – so you know you detected something,” says Honein. “But depending on how nanotubes are dispersed in the gel, the intensity may change from experiment to experiment, which is inconsistent.”

“We have these sensors, they’re coming out, they’re promising, they can detect biomolecules of interest so it’s beyond proof-of-concept,” adds Boghossian. “And at this point, what we’re trying to do is package it into something accessible, and even portable – such as a microfluidic device.”

By exploiting this property, sensors can be designed with the ability to simultaneously detect multiple molecules using different wavelengths of light. This offers a particular advantage when conducting multianalyte analysis on more complex samples, such as urine, cerebrospinal fluid, blood serum, and even opaque fluids like blood itself.