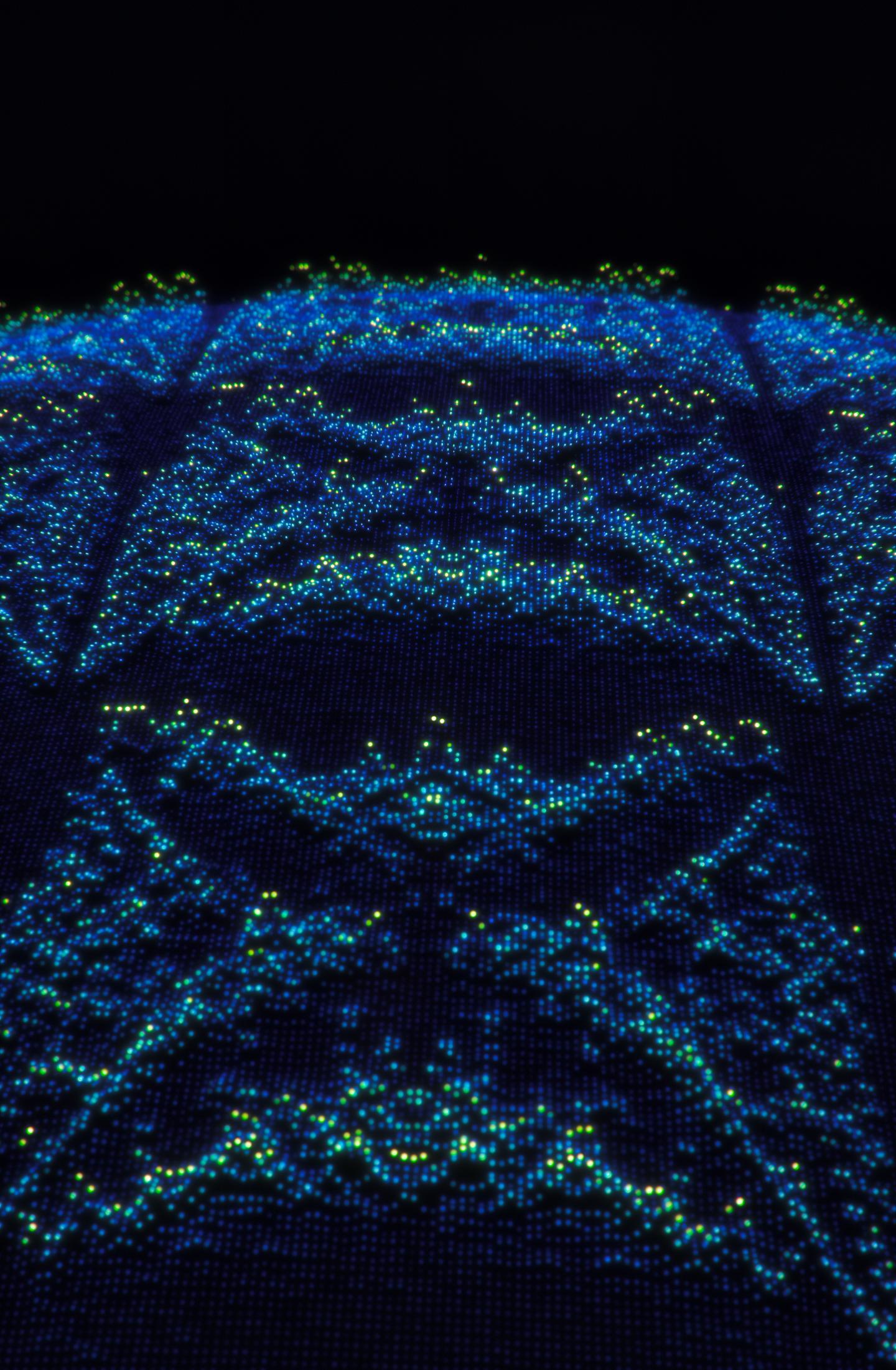 The computational processing power of quantum bits (qubits) is poised to have profound impacts on diverse fields of science and engineering. Using 9 superconducting qubits, researchers at Google and the University of California Santa Barbara, the National University of Singapore and Technical University of Crete, were able to simulate the intricate energy spectrum predicted for 2-D electrons in a magnetic field, the Hofstadter butterfly. This graphic is based on experimental data. Source: Visual Science/Google

Quantum simulators, which are special-purpose quantum computers, will help researchers identify materials with new and useful properties. This enticing future has just taken a step forward thanks to a collaboration between Google and researchers at universities in California, Singapore and Greece.

The international team used photons in Google’s quantum chip to simulate the surprising and beautiful pattern of the ‘Hofstadter butterfly’, a fractal structure characterizing the behaviour of electrons in strong magnetic fields. The results, published 1 December in Science, show how quantum simulators are starting to live up to their promise as powerful tools.

“We’ve always had this idea that we can use photons to simulate and better understand nature. Our collaboration puts this into practice,” says Dimitris Angelakis at the Centre for Quantum Technologies, National University of Singapore.

The feat was performed on Google’s chain of nine superconducting quantum bits (qubits) by collaborators at Google and the University of California Santa Barbara in the United States, the National University of Singapore and Technical University of Crete, Greece. It shows how a quantum simulator can reproduce all kinds of exotic complex quantum behaviour. This will enable researchers to simulate – and thus engineer – materials with exotic electronic conduction properties, potentially opening up a range of new applications.

“With chips similar to the one used in this experiment, we are interested to study problems at the core of condensed matter, statistical mechanics, and non-equilibrium dynamics,” says Google’s Pedram Roushan, a quantum electronics engineer.

Hofstadter’s butterfly first appeared in 1976, in calculations of electrons in a two-dimensional material in a strong magnetic field. The butterfly maps the splits and shifts of the electron’s energy levels with changes in the field strength. In this quantum simulation, the photons took the role of the electrons while gates on the qubits provided an analogue of the magnetic field. The butterfly pattern emerged from the team’s measurements.

The experiment relied on the team’s invention of a novel spectroscopy technique they dub ‘hit and listen’. The technique maps the energy levels of light particles, microwave photons, stored in the nine qubits.

“Our method is like hitting a bell. The sound it makes is a superposition of all the basic harmonics. By hitting it in different positions a few times and listening to the tune long enough, one can resolve the hidden harmonics. We do the same with the quantum chip, hitting it with photons and then following its evolution in time,” explains Angelakis. The team saw the butterfly by hitting the qubits with one photon at a time.

The team also hit the qubits with two photons simultaneously, and made the qubits disorderly – programming some randomness into their properties – in order to study the complex phenomenon known as ‘many-body localization’. This is a quantum phase transition, akin to the phase change that happens when water freezes into ice, that determines whether materials are conductors or insulators The team found precursors of many-body localization by applying their ‘hit and listen’ technique to different regimes of disorder and interaction.

Getting to grips with this kind of phenomenon may provide another route to designing useful new materials with exotic conduction properties. However, physicists in general struggle to simulate such complex scenarios. It was predicted in the 1950s that disorder in a material could block the movement of electrons through it. That’s called localization. But if the particles can interact with each other, the problem becomes ‘many-body’ – and much harder to model.

For just two photons across nine qubits, the team could simulate on conventional computers what behaviour to expect, finding good agreement with their experimental results. But add just a few more qubits and the problem becomes intractable for classical machines.

That makes the prospect of bigger quantum simulators enticing for scientists – they could tackle problems beyond the reach of today’s supercomputers.