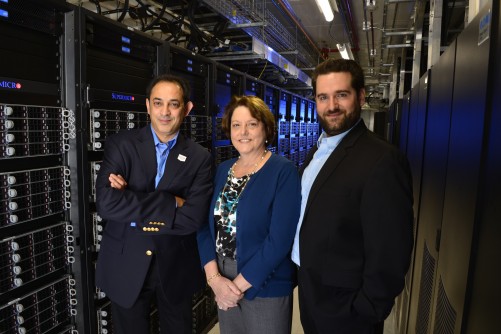 Caliburn, a supercomputer with the computational power of more than 10,000 standard desktop computers, is catalyzing diverse, innovative research at Rutgers University and across New Jersey, according to the Rutgers Discovery Informatics Institute.

Caliburn is the most powerful computing system in the Garden State. It ranked No. 2 among the Big Ten universities when it was deployed and continues to enable data-driven science and engineering at unprecedented scales, the institute says. This year, Caliburn has already provided computing that would have taken more than 6,000 years on a typical desktop.

“Computing has become a critical driver across all of science, and Caliburn provides a competitive advantage to researchers and students across New Jersey, catalyzing new research and driving innovation,” said Manish Parashar, distinguished professor of computer science in the Rutgers School of Arts and Sciences and founding director of the Rutgers Discovery Informatics Institute (RDI2) within Rutgers’ Office of Research and Economic Development.

The State of New Jersey through its Higher Education Leasing Fund program awarded $10 million to the institute to build a powerful computing system that could catalyze innovation in the Garden State’s data-driven economy. The funding allowed the institute to build an advanced computing infrastructure that includes Caliburn to support researchers at Rutgers and elsewhere. Parashar and Ivan Rodero, institute associate director for technical operations, designed the system with a unique architecture and capabilities.

“We continue to integrate new technologies and innovative solutions with Caliburn to maximize its impact on science,” Rodero said.

Peggy Brennan-Tonetta, associate vice president for economic development, said “Caliburn was a transformational investment in the future of New Jersey’s economic development, as the use of computation and big data have become key enablers for innovation in nearly every field of research and industry sector.”

For example, at Rutgers University–Camden, Associate Professor Grace Brannigan’s group is using Caliburn to study how single amino-acid mutations within proteins can affect the flow of cell signaling between neurons. Such studies can help pinpoint links between mutations and increased susceptibility to diseases such as epilepsy, addiction, schizophrenia, bipolar, and unipolar depression. The group is trying to find out why certain gene mutations are tied to aging and stress-related disorders, as well as lower tolerance for drugs. Her groundbreaking research would not have been possible without access to Caliburn.

Humna Awan, a graduate student in Professor Eric Gawiser’s research group at Rutgers University–New Brunswick, works with Caliburn and the institute to develop tools that allow researchers to maximize information about the universe stemming from large galaxy surveys that will observe billions of galaxies. Gawiser leads a team in the Department of Physics and Astronomy that seeks to explain why the distribution of galaxies is so clumpy and what that can tell us about the dark energy that is causing the expansion of the universe to accelerate.

At Rutgers Business School, Gyorgy Matyasfalvi, a recent graduate of Professor Jonathan Eckstein’s group, built software tools for writing code that would be simple and readable yet run efficiently on hundreds or thousands of processors. Caliburn fulfilled an essential role in validating the research results on example problems involving planning the growth of electric power grid systems under thousands of possible demand scenarios.