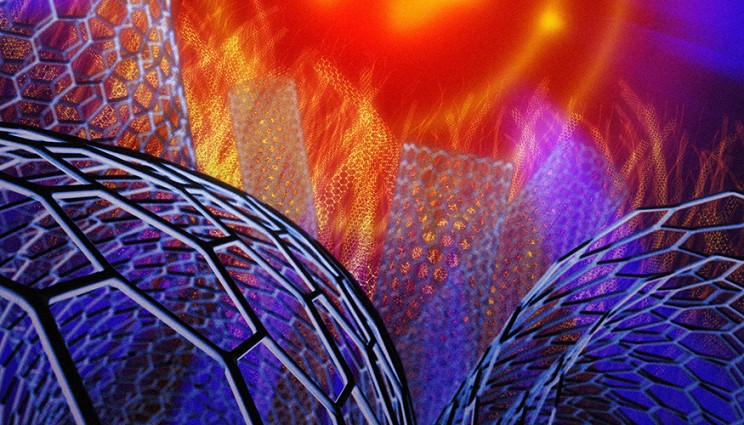 Rendering of a 2D X-ray scattering pattern containing information about the multiscale structure of a carbon nanotube (CNT) ‘forest’ across four orders of magnitude in length scale, a much wider range than previously achieved. Fully resolved features include the graphitic lattice and interlayer wall spacing, CNT diameter, CNT spacing and vertical corrugations. Image by Ryan Chen/LLNL

For the first time, scientists have continuously mapped the multiscale structure of hierarchically self-organized carbon nanotubes across four orders of magnitude in length scale, according to a new study.

“Structural characteristics like pore size distribution, pore density and tortuosity dictate membrane transport performance and can be quantified easily with X-ray methods,” Francesco Fornasiero, LLNL scientist and the principal investigator on the project, said in a statement.

Complex hierarchical structures are made from synthetic nanocarbon allotropes, including nanotubes and graphene, and could be used in several applications, including nanoelectronics, energy storage, filtration and separation.

The arrangement of atoms and defects classically govern a material’s function—similar to how nanoscale building blocks order and align within a larger ensemble strongly influence the material’s macroscale performance.

When it lacks comprehensive, multiscale structural characterization, the progress in application-targeted synthesis of hierarchical nanomaterials is stalled.

“We were interested in describing the entire structure of aligned carbon nanotube ‘forests’ across dramatically different length scales, which typically cannot be done using just one technique, such as conventional microscopy or spectroscopy,” Eric Meshot, an LLNL scientist and lead author of the study, said in a statement.

“X-ray scattering is powerful because the addressable feature size is widely tunable, simply based on the incoming X-ray energy and where you place your detector to collect the outgoing X-rays,” he added.

The researchers drew correlations between adjacent length scales to discover that the packing density of nanotubes ultimately influences alignment at every length scale.

They also used soft X-rays to resolve microscale structural patterns that can emerge along the nanotube growth direction, which showed that the carbon nanotube materials may form vertical corrugations with high microscale order despite having low nanoscale order.