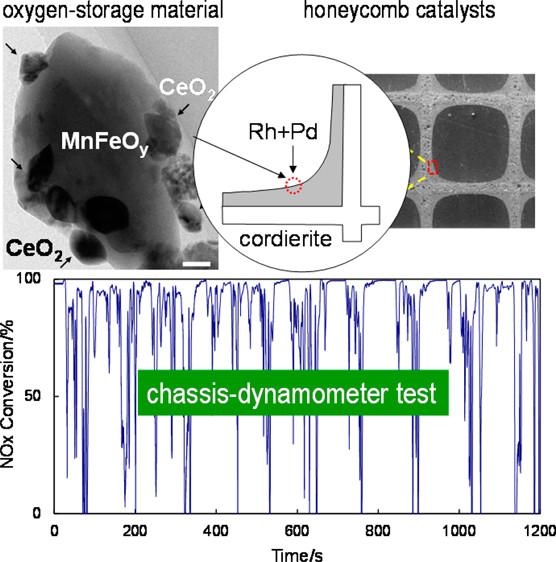 Automobiles are facing increasingly strict emissions regulations in an effort to reduce the amount of harmful air pollutants that are released into the environment. In Japan, for example, the current emissions standards for NOx and nonmethane hydrocarbons are less than 0.05 g/km. Currently, one method of reducing harmful emissions is with a high-performance, three-way catalytic (TWC) converter. This device reduces harmful nitrogen oxides to nitrogen and oxygen, oxidizes carbon monoxide to carbon dioxide, and oxidizes unburnt hydrocarbons to carbon dioxide and water. However, it requires the use of the rare-earth element Cerium (Ce), which is increasing in price and can suffer from supply problems. Professor Masato Machida from Kumamoto University, Japan has been researching ways to reduce the amount of Ce used in catalytic converters and even find an alternative material to replace it.

In their most recent attempt to reduce the amount of Ce in their experimental catalyst, Professor Machida and collaborators from Japan’s National Institute of Advanced Industrial Science & Technology (AIST) grafted cerium oxide to MnFeOy (CeO2/MnFeOy), and compared their new catalyst with two reference catalysts, CeO2/Fe2O3 and CeO2/Mn2O3. Upon assessing the oxygen-release profiles through carbon monoxide temperature-programmed reduction (CO-TPR), the researchers found that even though CeO2/Mn2O3 exhibited oxygen release rates greater than CeO2/MnFeOy between ~350 to ~550 degrees Celsius, the experimental catalyst started releasing at the lowest possible temperature. This provided evidence that oxygen release was improved by both combining Fe2O3 and Mn2O3, and grafting CeO2 to the surface.

The oxygen storage capacity (OSC) was also found to improve with the addition of CeO2, which supports evidence of its oxygen gateway effect. The researchers believe that this was due to an increase in efficiency when the two oxygen-storage materials are brought together. Most importantly, however, is the TWCs ability to buffer variations in the air-to-fuel (A/F) ratio during fuel-rich and fuel-lean exhausts. For this experiment, Pd/A2O3 was used as the reference against the CeO2/MnFeOy experimental catalyst. The experimental catalyst was found to provide a pronounced buffering effect, whereas the reference catalyst had none. Furthermore, the buffering effect was found to increase as variations in the A/F frequency increased. This was considered to be due to the high oxygen release rate of CeO2 in the early stages of the experiment.

The researchers then put their new catalyst to the test in conditions that more closely resembled the real world. Using the Japanese standard JC08 (hot start) mode for gasoline engines, they developed two (reference and experimental) real-sized honeycomb catalysts and compared their performance using a four cylinder, 1339 cc, gasoline engine on a chassis dynamometer. The experimental catalyst was a 1:2 wt ratio of 1 wt% Rh-loaded CeO2/MnFeOyand 2.5 wt% Pd/A2O3, and the reference catalyst was a mixture of 1 wt% Rh/CeO2 and Pd/A2O3. The experimental catalyst used 30% less CeO2 than the reference thereby reducing the need for the rare earth metal.

The tests of the full sized catalytic converters revealed that the conversion rate of total hydrocarbons (THC) for both converters is very high and relatively consistent throughout the 20 minute test, and the reference catalyst performs slightly better overall. Conversion rates for CO and NOx vary greatly with engine speed, acceleration, and deceleration for both catalysts, and the differences between the two catalysts are very small. Despite the 30% reduction in CeO2, the experimental catalyst performed very similar to the reference catalyst.

“Our new catalyst shows great promise and we hope that we can find a way to increase performance, particularly at lower temperatures,” said Professor Machida. “CeO2-ZrO2 works well for oxygen storage and release at high reaction rates, and we are currently working on creating a composite with it and the MnFeOy oxygen reservoir. We hope to be able to improve catalyst performance and reduce the amount of expensive rare earth elements used at the same time.”