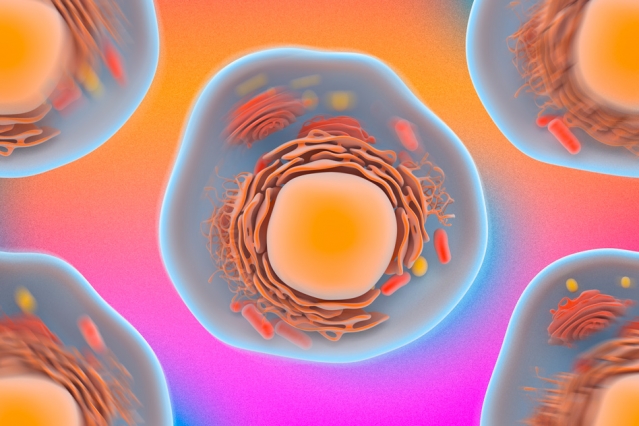 MIT engineers have devised a way to assess a cell’s mechanical properties simply by observation. The researchers use standard confocal microscopy to zero in on the constant, jiggling motions of a cell’s particles. Image: Jose-Luis Olivares/MIT

A team from the Massachusetts Institute of Technology has developed a method to determine the mechanical properties of cells simply by observation, something that could help doctors diagnose and track the progression of certain diseases, including cancer.

The team used standard confocal microscopy to zero in on the constant, jiggling motions of a cell’s particles—movements that could be used to decipher a cell’s stiffness.

The current method for determining this involves directly probing cells with expensive instruments, including atomic force microscopes and optical tweezers that make direct, invasive contact with the cells.

“There are several diseases, like certain types of cancer and asthma, where stiffness of the cell is known to be linked to the phenotype of the disease,” Ming Guo, the Brit and Alex d’Arbeloff Career Development Assistant Professor in MIT’s Department of Mechanical Engineering, said in a statement. “This technique really opens a door so that a medical doctor or biologist, if they would like to know the material property of cell in a very quick, noninvasive way, can now do it.”

To calculate a material’s mechanic properties by observing and measuring the movement of particles in the material a material must be in equilibrium—where any particle motions must be due to the effect of the material’s temperature rather than any external forces acting on the particles.

“You can think of equilibrium as being a hot cup of coffee,” Guo said. “The coffee’s temperature alone can drive sugar to disperse. Now if you stir the coffee with a spoon, the sugar dissolves faster, but the system is not driven solely by temperature anymore and is no longer in equilibrium.

“You’re changing the environment, putting energy in and making the reaction happen faster.”

Organelles, including mitochondria and lysosomes, are constantly juggling in response to the cell’s temperature, but there are also many minispoons stirring up the surrounding cytoplasm in the form of proteins and molecules that actively push vibrating organelles around.

The researchers opted to find a way to tease out temperature-driven motions in a cell by looking at the cell within a very narrow timeframe and found that particles energized solely by temperature exhibit a constant jiggling motion.

Also active processes that can knock a particle around a cell’s cytoplasm do so only occasionally.

The researchers carried out experiments on human melanoma cells by injecting small polymer particles into each cell and then tracking their motions under a standard confocal fluorescent microscope.