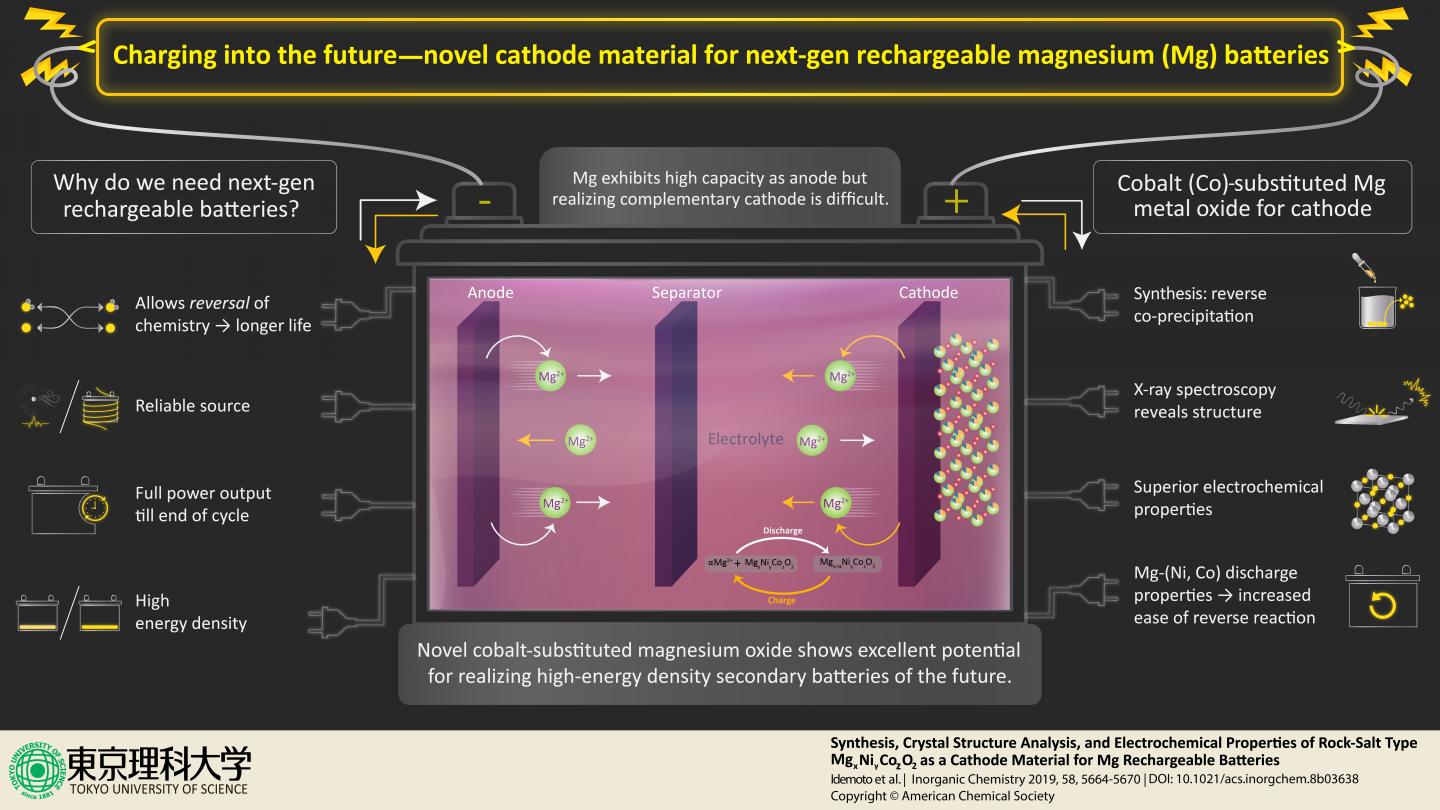 Life today depends heavily on electricity. However, the unrelenting demand for electricity calls for increasingly greener and “portable” sources of energy. Although windmills and solar panels are promising alternatives, the fluctuation in output levels depending on external factors renders them as unreliable. Thus, from the viewpoint of resource allocation and economics, high-energy density secondary batteries are the way forward. By synthesizing novel material (a metal compound) for electrode that facilitates reversing of the chemistry of ions, a group of researchers led by Prof. Idemoto from Tokyo University of Science combat the wasteful aspects of energy sources by laying an important foundation for the production of next-generation rechargeable magnesium secondary batteries. The researchers are optimistic about the discovery and state, “We synthesized a rock salt type that has excellent potential for being used as the positive electrode material for next-generation secondary batteries.”

The most popular source of portable energy, a battery comprises three basic components–the anode, the cathode, and the electrolyte. These participate in an interplay of chemical reactions whereby the anode produces extra electrons (oxidation) that are absorbed by the cathode (reduction), resulting in a process known as redox reaction. Because the electrolyte inhibits the flow of electrons between the anode and cathode, the electrons preferentially flow through an external circuit, thus initiating a flow of current or “electricity.” When the material in the cathode/anode can no longer absorb/shed electrons, the battery is deemed dead.

However, certain materials allow us to reverse the chemistry, using external electricity that runs in the opposite direction, such that the materials may return to their original state. Such rechargeable batteries are similar to the ones used in portable electronic devices such as mobile phones or tablets.

Prof. Idemoto and colleagues at Tokyo University of Science synthesized cobalt-substituted MgNiO2, which shows promising results as a novel cathode. “We focused on magnesium secondary batteries that use polyvalent magnesium ions as movable ions,” states Prof. Idemoto while highlighting their study and its tantalizing prospects “which are expected to have high energy density in next-generation secondary batteries.” Of late, the low toxicity of magnesium and the ease of carrying out reversed reactions have generated enthusiasm for utilizing it as anode material in high-energy density, rechargeable batteries. However, realization of this remains difficult owing to the lack of a suitable complementary cathode and electrolyte. This is exactly what these researchers are aiming to change with their research published in the journal Inorganic Chemistry.

Building upon standard laboratory techniques, the researchers synthesized the novel salt using the “reverse co-precipitation” method. From the aqueous solution, they could extract the novel rock-salt. To investigate the structure as well as for lattice imaging of the extracted salt, they used neutron and synchrotron X-ray spectroscopy complementarily. In other words, they studied the diffraction patterns created when the powder samples were irradiated with neutrons or X-ray, resulting in characteristic peaks in intensity at certain positions. Simultaneously, the researchers performed theoretical calculations and simulations for the rock salt-types that showed a possible “charge?discharge behavior” needed for suitable cathode materials. This allowed them to determine the arrangement of Mg, Ni, and Co cations in the rock-salt structure based on the most energetically stable structure among the 100 generated symmetrically distinct candidates.

Apart from the structural analysis, the researchers also performed charge?discharge tests with a tripolar cell and known reference electrodes, under several conditions, to understand the electrochemical properties of the rock salt as a cathode material for the magnesium rechargeable batteries. They found that they could manipulate the battery characteristics based on the Mg composition and the Ni/Co ratio. These structural and electrochemical analyses allowed them to demonstrate the optimal composition for the rock salt as a cathode material, along with its reliability under different ambient conditions. Prof. Idemoto and the team are optimistic about the features of the synthesized rock salt, as they emphasize, “it has an excellent potential for use as the positive electrode material.”

With such optimism spewing from the research, one can surely conclude that humans are charging into a tomorrow that is lit up by the science of today.