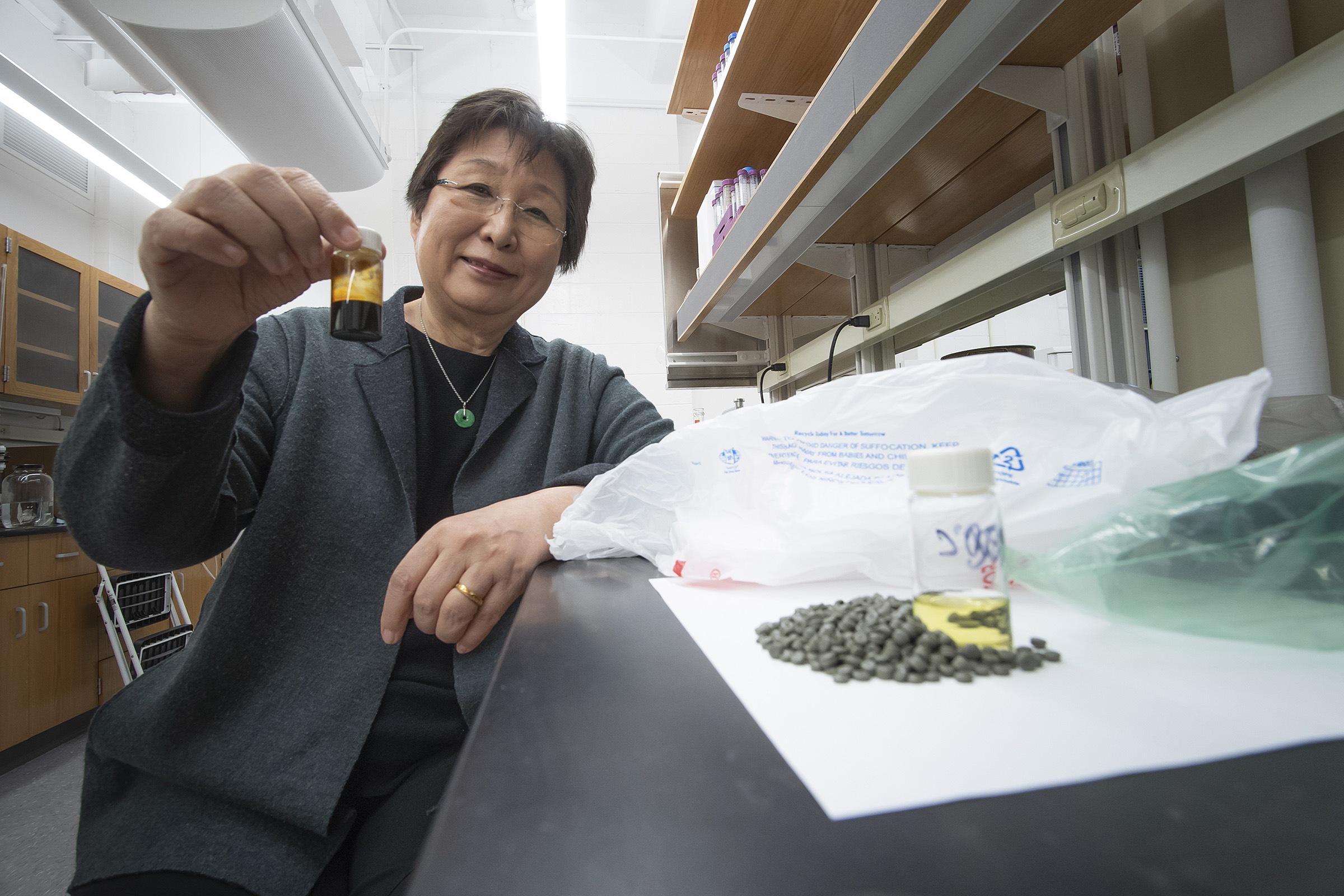 A chemical conversion process developed at Purdue University allows researchers to turn recycled shopping bags into pellets into oil as shown in the bottle being held by Linda Wang, the Maxine Spencer Nichols Professor in the Davidson School of Chemical Engineering. Using distillation, that oil is separated into a gasoline-like fuel in the bottle in the counter and a diesel-like fuel not shown. (Purdue Research Foundation image/Vincent Walter)

One research team is trying to tackle the growing problem of plastic waste ending up in the ocean.

“Our strategy is to create a driving force for recycling by converting polyolefin waste into a wide range of valuable products, including polymers, naphtha [a mixture of hydrocarbons], or clean fuels,” Linda Wang, the Maxine Spencer Nichols Professor in the Davidson School of Chemical Engineering at Purdue University and leader of the research team developing this technology, said in a statement. “Our conversion technology has the potential to boost the profits of the recycling industry and shrink the world’s plastic waste stock.”

The team incorporated both selective extraction and hydrothermal liquefaction in the new conversion process, so when the polyolefin plastic is converted into naphtha, it can be used as a feedstock for other chemicals or also further separated into specialty solvents or other products.

In the study, model polypropylene was converted into oil using supercritical water at between 380 and 500 degrees Celsius and 23 MPa over a reaction time of 0.5-6 h. They found that higher reaction temperatures or longer reaction times led to more gas products.

The researchers are working to optimize the process that will allow them to produce high-quality gasoline or diesel fuels and the conversion process is a net-energy positive and potentially has a higher energy efficiency and lower greenhouse gas emissions than incineration and mechanical recycling.

According to United Nations estimates, there are more than eight million tons of plastic flowing into the world’s oceans annually. The researchers project that the clean fuels derived from the polyolefin waste generated each year could satisfy about 4 percent of the annual demand for gasoline or diesel fuels.

Over the last 65 years, about 8.3 billion tons of plastic has been produced, with about 12 percent being incinerated and 9 percent recycled, with the rest ending up in either landfills or the oceans.

The World Economic Forum predicts that by 2050 the oceans will hold more plastic waste than fish if the waste continues to be dumped.

However, the researcher’s conversion process could put a significant dent into the amount of plastic that winds up in the ocean.

“Plastic waste disposal, whether recycled or thrown away, does not mean the end of the story,” Wang said. “These plastics degrade slowly and release toxic micro plastics and chemicals into the land and the water. This is a catastrophe, because once these pollutants are in the oceans, they are impossible to retrieve completely.”

Wang said the hope is that the technology will stimulate the recycling industry to reduce the increasingly concerning plastic waste problem. The team is now looking for investors and partners to help commercialize their new technology.

The technology is patented through the Purdue Research Foundation’s Office of Technology Commercialization.