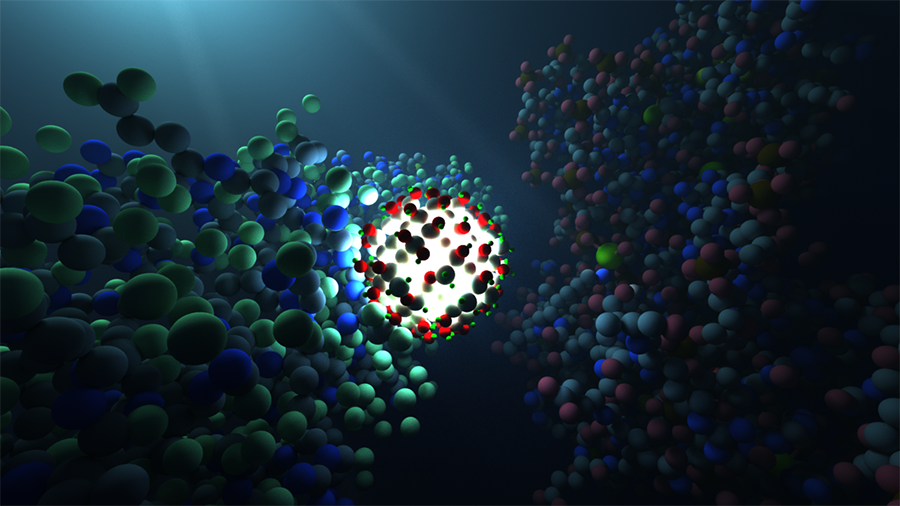 Argonne, the University of Chicago and Fermilab are launching an intellectual hub called the Chicago Quantum Exchange to advance academic, industrial and governmental efforts in the science and engineering of quantum information. Above: An illustration of a blinking quantum dot in its ‘on’ state. (Image courtesy of Nicholas Brawand).

The University of Chicago is collaborating with the U.S. Department of Energy’s Argonne National Laboratory and Fermi National Accelerator Laboratory to launch an intellectual hub for advancing academic, industrial and governmental efforts in the science and engineering of quantum information.

This hub within the Institute for Molecular Engineering (IME), called the Chicago Quantum Exchange, will facilitate the exploration of quantum information and the development of new applications with the potential to dramatically improve technology for communication, computing and sensing. The collaboration will include scientists and engineers from the two national labs and IME, as well as scholars from UChicago’s departments of physics, chemistry, computer science and astronomy and astrophysics.

Quantum mechanics governs the behavior of matter at the atomic and subatomic levels in exotic and unfamiliar ways compared to the classical physics used to understand the movements of everyday objects. The engineering of quantum phenomena could lead to new classes of devices and computing capabilities, permitting novel approaches to solving problems that cannot be addressed using existing technology.

“The combination of the University of Chicago, Argonne National Laboratory and Fermi National Accelerator Laboratory, working together as the Chicago Quantum Exchange, is unique in the domain of quantum information science,” said Matthew Tirrell, dean and Founding Pritzker Director of the Institute for Molecular Engineering and Argonne’s deputy laboratory director for science. “The CQE’s capabilities will span the range of quantum information, from basic solid state experimental and theoretical physics, to device design and fabrication, to algorithm and software development. CQE aims to integrate and exploit these capabilities to create a quantum information technology ecosystem.”

Serving as director of the Chicago Quantum Exchange will be David Awschalom, UChicago’s Liew Family Professor in Molecular Engineering and an Argonne senior scientist. Discussions about establishing a trailblazing quantum engineering initiative began soon after Awschalom joined the UChicago faculty in 2013 when he proposed this concept, subsequently developed through the recruitment of faculty and the creation of state-of-the-art measurement laboratories.

“We are at a remarkable moment in science and engineering, where a stream of scientific discoveries are yielding new ways to create, control and communicate between quantum states of matter,” Awschalom said. “Efforts in Chicago and around the world are leading to the development of fundamentally new technologies, where information is manipulated at the atomic scale and governed by the laws of quantum mechanics. Transformative technologies are likely to emerge with far-reaching applications, ranging from ultra-sensitive sensors for biomedical imaging to secure communication networks to new paradigms for computation. In addition, they are making us re-think the meaning of information itself.”

The collaboration will benefit from UChicago’s Polsky Center for Entrepreneurship and Innovation, which supports the creation of innovative businesses connected to UChicago and Chicago’s South Side. The CQE will have a strong connection with a major Hyde Park innovation project that was announced recently as the second phase of the Harper Court development on the north side of 53rd Street, and will include an expansion of Polsky Center activities. This project will enable the transition from laboratory discoveries to societal applications through industrial collaborations and startup initiatives.

Companies large and small are positioning themselves to make a far-reaching impact with this new quantum technology. Alumni of IME’s quantum engineering Ph.D. program have been recruited to work for many of these companies. The creation of CQE will allow for new linkages and collaborations with industry, governmental agencies and other academic institutions, as well as support from the Polsky Center for new start-up ventures.

This new quantum ecosystem will provide a collaborative environment for researchers to invent technologies in which all the components of information processing – sensing, computation, storage and communication – are kept in the quantum world, Awschalom said. This contrasts with today’s mainstream computer systems, which frequently transform electronic signals from laptop computers into light for internet transmission via fiber optics, transforming them back into electronic signals when they arrive at their target computers, finally to become stored as magnetic data on hard drives.

The collaboration will rely on the distinctive strengths of the University and the two national laboratories, both of which are located in the Chicago suburbs and have longstanding affiliations with the University of Chicago.

At Argonne, approximately 20 researchers either conduct quantum-related research or express interest in joining the field. Many of them have joint appointments at the laboratory and UChicago. Fermilab has about 25 scientists and technicians working on quantum research initiatives related to the development of particle sensors, quantum computing and quantum algorithms.

“This is a great time to invest in quantum materials and quantum information systems,” said Supratik Guha, director of Argonne’s Nanoscience and Technology Division and a professor of molecular engineering at UChicago. “We have extensive state-of-the-art capabilities in this area.”

Argonne and UChicago already have invested approximately $6 million to build comprehensive materials synthesis facilities — called “The Quantum Factory” — at both locations. Guha, for example, has installed state-of-the-art deposition systems that he uses to layer atoms of materials needed for building quantum structures.

“Together we will have comprehensive capabilities to be able to grow and synthesize one-, two- and three-dimensional quantum structures for the future,” Guha said. These structures, called quantum bits — qubits — serve as the building blocks for quantum computing and quantum sensing.

Argonne also has theorists who can help identify problems in physics and chemistry that could be solved via quantum computing. Argonne’s experts in algorithms, operating systems and systems software, led by Rick Stevens, associate laboratory director and UChicago professor in computer science, will play a critical role as well, because no quantum computer will be able to operate without connecting to a classical computer.

Fermilab’s interest in quantum computing stems from the enhanced capabilities that the technology could offer within 15 years, said Joseph Lykken, Fermilab deputy director and senior scientist.

Lykken noted that almost any quantum computing technology is by definition a device with atomic-level sensitivity that potentially could be applied to sensitive particle physics experiments. An ongoing Fermilab-UChicago collaboration is exploring the use of quantum computing for axion detection. Axions are candidate particles for dark matter, an invisible mass of unknown composition that accounts for 85 percent of the mass of the universe.

“We build the best superconducting microwave cavities in the world, but we build them for accelerators,” Lykken said. Fermilab is collaborating with UChicago to adapt the technology for quantum applications.

Fermilab also has partnered with the California Institute of Technology and AT&T to develop a prototype quantum information network at the lab. Fermilab, Caltech and AT&T have long collaborated to efficiently transmit the Large Hadron Collider’s massive data sets. The project, a quantum Internet demonstration of sorts, is called INQNET (INtelligent Quantum NEtworks and Technologies).

Fermilab also is working to increase the scale of today’s quantum computers. Fermilab can contribute to this effort because quantum computers are complicated and sensitive cryogenic devices. The laboratory has decades of experience in scaling up such devices for high-energy physics applications.

“It’s one of the main things that we do,” Lykken said.