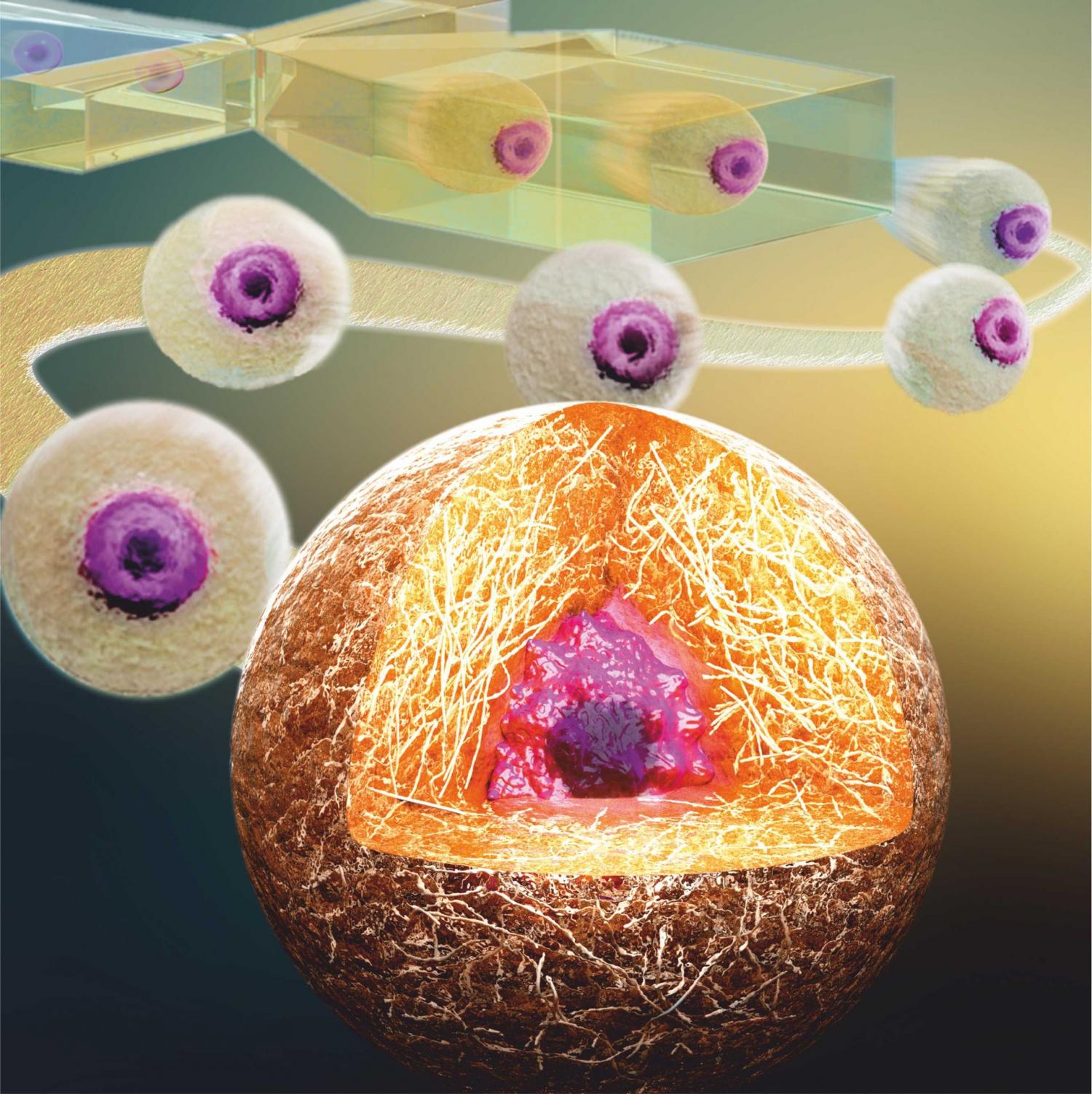 Researchers at the University of Twente’s MIRA research institute have developed a chip that can capture and hold individual cells in the exact centre of a minuscule hydrogel droplet. Their novel method keeps cells alive for multiple weeks, which makes it easier to study them.

This makes it possible to, for example, test the action of new drugs and improve stem cell therapies with unparalleled control. Details of this research were published in the prestigious scientific journal Small, and are even displayed on its cover.

Many scientists need strategies to study individual cells (e.g. stem cells) for a period of multiple weeks. This is of great importance in areas that focus on drug testing, fundamental disease studies, and cell therapy development.

The conventional method to study individual cells outside the body involves ‘capturing’ and cultivating them in tiny droplets of hydrogel, known as microgels. Until recently, however, all attempts to culture individual cells under such controlled conditions for extended periods of time failed, as the cells escaped from the microgels within a few days. Until now, this problem has greatly restricted the range of potential applications of this promising technology.

Researchers at the University of Twente’s MIRA research institute identified that the escaping cells were almost always located at the edge of the microgels. Using high-speed cameras, they discovered that this was due to the current production method. They solved this problem by developing a chip that captures the cells in the exact centre of the microgels. Not only did this approach prevent the cells from escaping, it also resulted in more than 90 percent cell survival for at least 28 days. According to University of Twente research scientist, Tom Kamperman (who will soon be defending his doctoral dissertation on this subject) this innovative method is an important step towards, for example, improved stem cell therapies or the engineering of complex tissues.

Hydrogel mainly consists of a water-swollen polymer network. Its structure resembles that of native tissues, which makes hydrogels extremely suitable for 3-D cell culture. Hydrogels can be created using, for example, UV light or enzymes that crosslink the individual polymers together. The University of Twente researchers discovered that, rather than crosslinking the polymers while the droplet is still forming, the trick is to trigger this process just afterwards, a technique they refer to as ‘delayed gelation’. This allows the cell to reposition to the centre of the hydrogel precursor droplet, which also contains the polymer and enzymes. After cell centering, the liquid droplets are exposed to hydrogen peroxide, which transforms them into stable microgels.

Cells have an individual character. Even within the same tissue every cell responds differently to influences from its environment. The new chip enables individual cells (e.g. stem cells) to be isolated and cultured in a natural 3-D environment for lengthy periods of time. This allows researchers to test the effects of new drugs on individual cells, to investigate diseases at a fundamental level, and to make cell therapies more efficient. In the present study, the University of Twente researchers showed that, by changing the composition of the microgel, they could steer individual stem cells into specific cell types, such as bone or fat cells.

The microgels can also be used as building blocks for printing tissues with a complex internal structure, as the University of Twente researchers showed in a paper that they published earlier this year.

Using the new chip, one can create hundreds of microgels per second, each containing an individual cell. While that may seem quite fast, it is still too slow for many clinical applications. Kamperman points out that “We are currently testing an improved prototype with a production rate that is up to a thousand times faster. This will eventually enable the clinical translation of this microgel technology.”