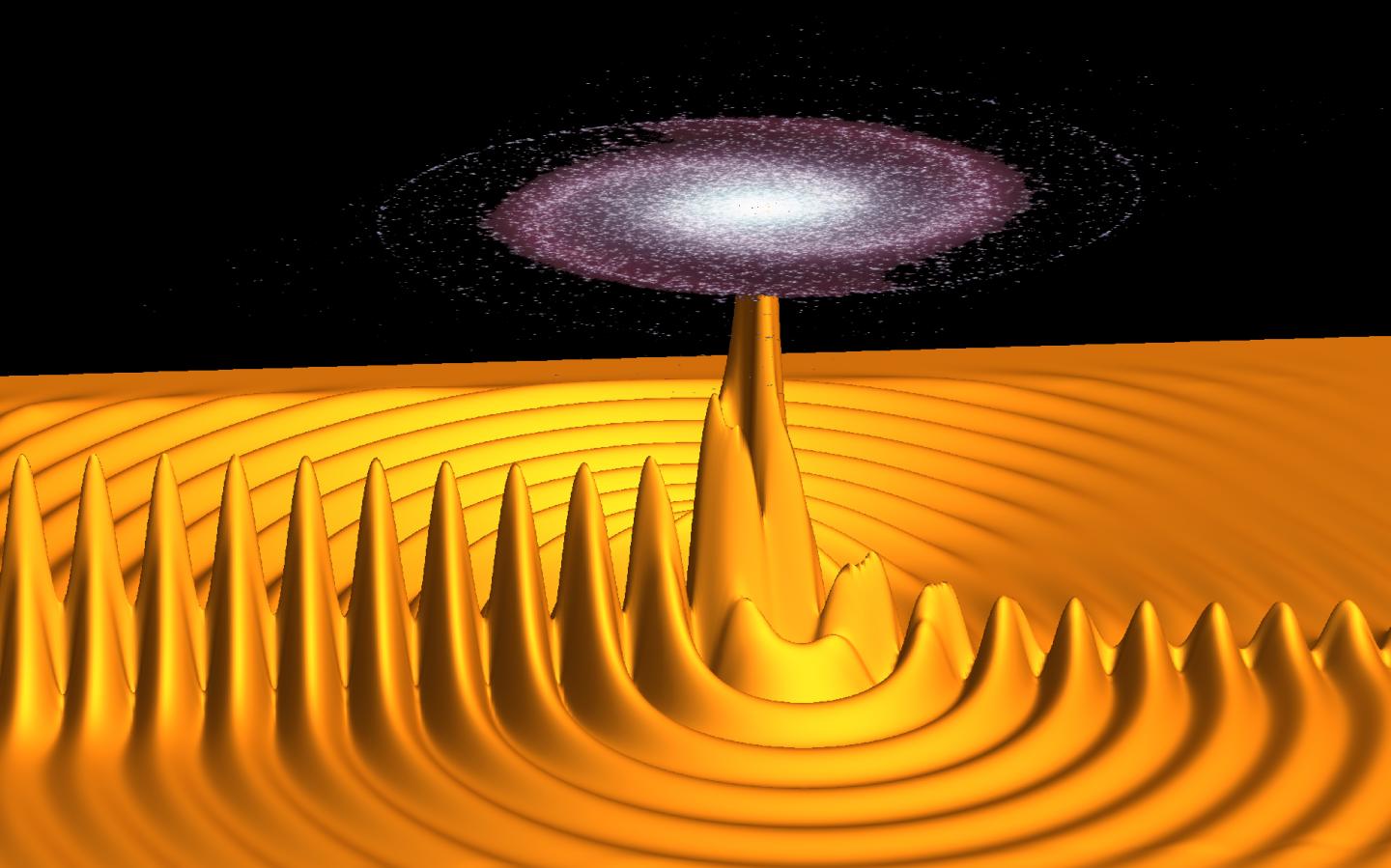 This is the directional emission of light. Credit: TU Wien

Recently, surprising physical effects were observed using special microscopic waveguides for light. Such “photonic structures” currently are revolutionizing the fields of optics and photonics, and have opened up the new research area of “Chiral Quantum Optics”. Physicists from Copenhagen, Innsbruck, and Vienna, who are leading figures in this field, have now written an overview on the topic which just appeared in the scientific journal Nature.

What one learns at school is that light oscillates under a right angle (transversal) with respect to its direction of propagation. Among experts, however, it was already known that light behaves differently when it is confined strongly in the transversal plane using so-called “photonic structures”. In particular, this is the case for special ultra-thin glass fibers which have a diameter of only a few hundred nanometers (one nanometer is a millionth part of a millimeter) and which are thereby smaller than the wavelength of light. Also waveguides based on so-called “photonic crystals” (two-dimensional structures with periodically arranged holes) can confine light in this way.

In this situation, the light also oscillates along its propagation direction (longitudinal). The combination of transversal and longitudinal oscillation leads to a rotating electric field which physicist call circular polarization. Without the spatial confinement, the electric field associated with circularly polarized light behaves like the propeller of an aircraft whose axis is parallel to the direction of propagation. “However, in narrow photonic waveguides, the electric field of the light resembles the rotor of a helicopter,” explains Arno Rauschenbeutel from the Vienna Center for Quantum Science and Technology at the Institute of Atomic and Subatomic Physics of TU Wien, Austria. Here, the spin of the light points along the axis of the rotor and is therefore oriented perpendicular to the propagation direction of the light.

This unexpected phenomenon has important consequences: The rotational sense of the electric field is suddenly defined by the propagation direction of the light. “As soon as light in a photonic structure travels in the opposite direction, the electric field rotates the other way around and the spin flips”, states Rauschenbeutel. Physicists call this phenomenon spin-momentum locking.

Things become particularly thrilling when so-called “quantum emitters” are coupled to the light field. These could for example be atoms or quantum dots, i.e., nanoscopic structures made from semiconductor material. Such emitters can be excited by light (light absorption) and radiate it back (light emission). Until recently, it was taken for granted in quantum optics that this interaction between light and emitters is always symmetric; precisely the same amount of light is radiated into one and into the opposite direction.

However, quantum emitters can be prepared such that they only absorb light of a certain polarization. In photonic structures, the rotational sense of the electric field, i.e., the light’s polarization, depend on the propagation direction. Consequently, if we now bring a suitably prepared quantum emitter into the light field of a photonic structure, the strength of the interaction between the emitter and the light will depend on the light’s propagation direction. “Having a direction-dependent interaction means that the symmetry is broken: The emitter radiates differently into opposite directions,” states Rauschenbeutel. This direction-dependence (chirality) is the underlying concept of “chiral quantum optics” and occurs not only for the emission of light, but also for absorption and scattering.

Since 2012, different groups have demonstrated corresponding effects in many experiments and used them for different purposes. Rauschenbeutel and his team concentrated their research on ultrathin glass fibers and bottle-shaped resonators, which they couple to atoms and microscopic metallic particles. Their co-authors around Peter Lodahl from the Niels Bohr Institute in Copenhagen, on the other hand, use waveguides based on photonic crystals. Furthermore, Hannes Pichler and Peter Zoller from the University of Innsbruck and the Institute for Quantum Optics und Quantum Information of the Austrian Academy of Sciences provided the theoretical foundations and developed impressive visions for the future.

The new physical effects enable fundamentally new applications. “We developed photonic diodes which are one-way streets for light. We realized circulators in which a single atom controls light similar to traffic in a roundabout,” says Rauschenbeutel emphasizing the successful cooperation between the Austrian scientists within the Special Research Program FoQuS (Foundations and Applications of Quantum Science) for this work. Such nonreciprocal devices have optical properties that depend on the propagation direction of the light and, analogously to their electronic counterparts, are required for the realization optical circuits. Such optical chips could be employed in future computers.

But optical chips based on chiral quantum optics may not only be used for classical information processing. They are also suitable for processing single photons and can furthermore be prepared in quantum mechanical superposition states. In this way, chiral quantum optical components are well suited for process quantum information in future quantum networks or quantum computers.