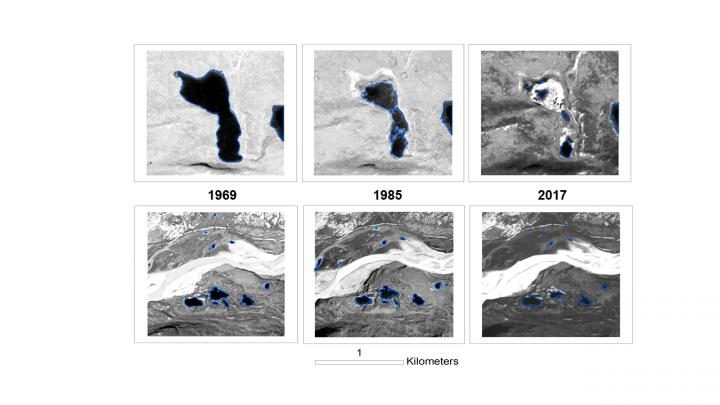 With climate change, the Arctic tundra is likely to become drier. Lakes may shrink in size and smaller lakes may even disappear according to a new Dartmouth study. In western Greenland, Kangerlussuaq experienced a 28 percent decrease in the number of smaller lakes (those less than 10,000 square meters) and a 20 percent decrease in total area from 1969 to 2017. Many of the lakes that had disappeared in 1969 have since become vegetated. The findings are published in the Journal of Geophysical Research: Biogeosciences.

“Lake drying may be one of the most significant consequences of Arctic climate change given that the majority of the world’s lakes are in high latitudes,” explained lead author Rebecca Finger Higgens, a graduate student in the ecology, evolution, ecosystems and society program at Dartmouth. “Much of the drying of lakes in Kangerlussuaq has been occurring from 1985 until now, a period during which we’ve also seen a 2.5 Celsius increase in the mean annual temperature. Our results demonstrate that warmer temperatures in western Greenland over the past 30 years have accelerated lake decline,” she added.

Finger Higgens first noticed that the Arctic landscape seemed to be getting drier in 2015 while doing fieldwork outside of Kangerlussuaq, Greenland. From 2015 to 2017, she served as a Joint Science Education Program (JSEP) graduate fellow during which she spent over six months conducting research in Kangerlussuaq. She started compiling collections of satellite and aerial imagery of lakes in Greenland gathered in the 1960s and 1980s and weather data to track changes over time.

Images of lakes in Kangerlussuaq were sourced from: declassified satellite CORONA imagery from the Cold War, which is available through the U.S. Geological Survey; an aerial survey by the Danish Government in Greenland, which is available through the National Oceanic and Atmospheric Administration; and satellite imagery from summer 2017 by Planet Labs, Inc. Temperature and precipitation data for Kangerlussuaq obtained by the Danish Meteorological Institute during 1971 to 2017 was also used.

In analyzing the imagery, the team wanted to determine why some lakes visible in 1969 weren’t visible in 2017. For a lake to be classified as disappeared, it had to have dried (be vegetated or non-vegetated) and be smaller than 100 square meters. The team found three possible reasons as to why some lakes weren’t visible in 2017: vegetation had come in and recolonized the area; the lake water was still present but too small to be detected by their threshold; or the lake remained but was just dry and not vegetated. Most of the lakes in the study which had disappeared were dry and vegetated.

While smaller lakes in Kangerlussuaq appeared to be especially susceptible to lake decline, larger lakes also saw a decline with a 21 percent decrease in lake count and a 2 percent decrease in surface area. The rapid thawing of permafrost may contribute to the draining of some larger lakes in the future. Warmer winters and drier summers are likely to accelerate losses in lakes, as the researchers found that evapotranspiration rates were higher during June, July and August. The study explains that these rates may be “exacerbated by longer snow- and ice-free periods during the summer.”

“As smaller lakes and wetlands disappear in the Arctic, the habitat of aquatic organisms and other animals is likely to be jeopardized,” said Finger Higgens. “The Arctic is home to many bird species that migrate north to breed, especially waterfowl. With declines in wetlands, we may see some declines in goose populations in this area.”

In addition, a drier Arctic may also increase the vulnerability to soil erosion, insect outbreaks, tundra fires and other phenomenon associated with drought-like conditions.

Rebecca A. Finger Higgens is available for comment at: rebecca.finger@gmail.com. The study was co-authored by Jonathan W. Chipman, David A. Lutz, Lauren E. Culler, Ross A. Virginia, and Laura A. Ogden at Dartmouth.