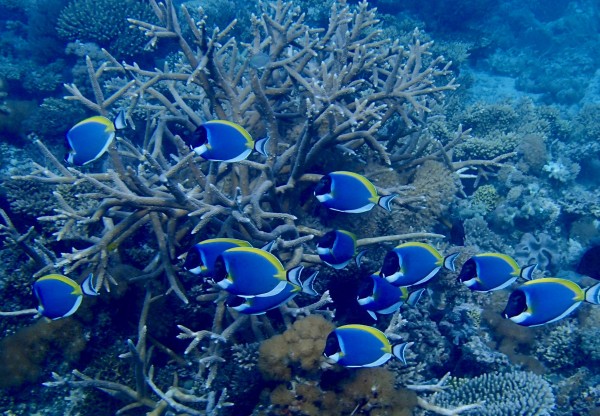 WCS scientists have discovered a refuge for corals where the environment protects otherwise sensitive species to the increasing severity of climate change. The bad news is that the reefs are showing signs of being overfished and weak compliance with local fisheries laws needs to be reversed to maintain the fish that help to keep reefs healthy. The scientists describe their findings in the journal Ecosphere.

The authors say reefs located in northern Mozambique and the Quirimbas Islands supports two types of refuges and a gradient of environments that create the potential for corals to adapt to climate change.

The first refuge is an environment that has enough variability for corals to adapt but lacks temperature extremes that would kill them. A second is deeper, cooler water but with the full spectrum of light that allows many species to thrive and avoid heat stress.

The second refuge area is associated with shipping channels that support coastal people and centers of heavy fishing. The authors found that many nearby reefs were not fished sustainably and fishers were therefore migrating to the second refuge to find profitable fishing.

Identifying climate-resistant reefs, called “Reefs of Hope,” is a high priority among conservation groups as corals are collapsing globally due to higher water temperatures.

The authors found warning signs of overfishing including small fishes, reduced numbers of species and the increasing occurrence of sea urchins and algae growth. Sea urchins can damage corals if not controlled by predators such as triggerfish, while algae can suffocate corals unless kept in check by grazing fish species.

The authors recommend that these coral refuge areas maintain a fish biomass of greater than 500 kilograms per hectare, which, as previously published WCS research shows, is the threshold to maintain ecological functions while sustaining local fisheries.

Said Tim McClanahan, WCS Senior Conservation Zoologist and lead author of the study: “Northern Mozambique Quirimbas reefs have a variety of refugia, environmental variability, and high diversity that give these reefs a high potential to adapt to rapid climate change.  If this region is to provide adaptive potential to climate change, fishing at a sustainable level and maintaining reef fish biomass, life histories, and functions is a high priority.”

Management recommendations include gear restrictions and closing certain areas to fishing, and  enforcing regulations in the Quirimbas National Park, which was established many years ago, but has failed to implement restrictions. Research is showing that properly managing marine protected areas (MPAs) continues to remain a challenge due to insufficient personnel and expenditures needed to enforce management. Another recent WCS-co-authored study said widespread lack of personnel and funds are preventing MPAs from reaching their full potential.

Global awareness continues to grow about the immediate threats facing coral reef ecosystems, as is a global commitment to address those threats. Last February, at the Economist World Ocean Summit in Bali, Indonesia, the ‘50 Reefs’ initiative was launched by the Global Change Institute of the University of Queensland and the Ocean Agency. The initiative brings together leading ocean, climate and marine scientists to develop a list of the 50 most critical coral reefs to protect, while leading conservation practitioners are working together to establish the best practices to protect these reefs.

This work was supported by the John D. and Catherine T. MacArthur Foundation; the US Agency for International Development; World Wide Fund for Nature (WWF) Mozambique; and the Sustainable Poverty Alleviation from Coastal Ecosystem Services (SPACES) NE-K010484-1 which is funded by the UK Ecosystem Services for Poverty Alleviation (ESPA) program. ESPA is funded by the UK Department for International Development, the Economic and Social Research Council, and the Natural Environment Research Council.

WCS’s efforts to protect marine biodiversity around the world will help inform the upcoming UN Ocean Conference. The conference will be convened by the United Nations General Assembly in New York City, June 5-9, 2017, and will support the implementation of Sustainable Development Goal 14 to conserve and sustainably use marine resources and to protect the world’s oceans and seas.