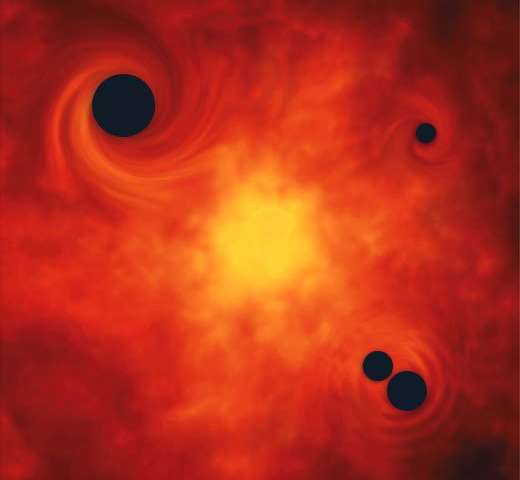 What is dark matter? How do supermassive black holes form? Primordial black holes might hold the answer to this longstanding question. Leiden and Chinese cosmologists have identified a new way in which these hypothetical objects could be produced immediately after the Big Bang. Their research has been published in Physical Review Letters.

In their quest to understand the universe, scientists are faced with some major unsolved puzzles. For example, stars move around galaxies as if there is five times more mass present than that observed. What makes comprises this dark matter? And another riddle: Galaxies harbor enormous black holes in their cores, weighing millions of solar masses. In young galaxies, collapsed stars did not have enough time to grow that big. How did these so-called supermassive black holes form?

Cosmologists have proposed a hypothetical solution that could solve one of both riddles. Primordial black holes, spawned shortly after the Big Bang, have the ability to either remain tiny or quickly gain mass. In the former case, they are candidates for dark matter. In the latter case, they could serve as seeds for supermassive black holes. Cosmologist Dong-Gang Wang from Leiden University and his Chinese colleagues Yi-Fu Cai, Xi Tong and Sheng-Feng Yan of USTC University have reported a new way in which primordial black holes could have formed around the time of the Big Bang.

“Other calculations have different ways to enhance perturbations, but run into problems,” says Wang. “We use resonance during inflation, when the universe grew exponentially shortly after the Big Bang. Our calculations are simple enough so that we can work with it. In reality, the mechanism might be more complicated, but this is a start. The narrow peaks that we get are inherent to the mechanism, because it uses resonance.”