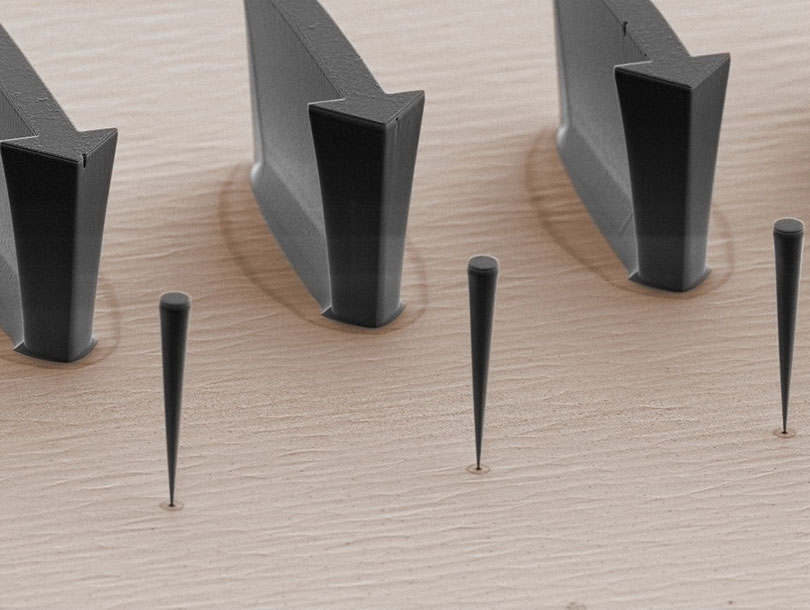 Trumpet-shaped nanowires with a length of about 10 micrometers are coupled to quantum dots located at their bases. The movement of the nanowire can be detected with a sensitivity of 100 femtometers by changing the wavelength of the light emitted by the quantum dots. The arrows are important for fabrication and help to locate the nanowires. (Credit: Grenoble Alps University)

Scientists from the Swiss Nanoscience Institute and the University of Basel have succeeded in coupling an extremely small quantum dot with 1,000 times larger trumpet-shaped nanowire. The movement of the nanowire can be detected with a sensitivity of 100 femtometers via the wavelength of the light emitted by the quantum dot. Conversely, the oscillation of the nanowire can be influenced by excitation of the quantum dot with a laser. Nature Communications published the results.

Professor Richard Warburton and Argovia Professor Martino Poggio’s teams in the Department of Physics and the Swiss Nanoscience Institute at the University of Basel worked with colleagues from Grenoble Alps University and the Alternative Energies and Atomic Energy Commission (CEA) in Grenoble to couple a microscopic mechanical resonator with a nano-scale quantum dot. They used nanowires made of gallium arsenide that are about 10 micrometers long and have a diameter of a few micrometers at the top. The wires taper sharply downwards and therefore look like tiny trumpets arranged on the substrate. Near the base, which is only about 200 nanometers wide, the scientists placed a single quantum dot that can emit individual light particles (photons).

If the nanowire oscillates back and forth due to thermal or electrical excitation, the relatively large mass at the wide end of the nano-trumpet produces large strains in the wire that affect the quantum dot at the base. The quantum dots are squeezed together and pulled apart; as a result, the wavelength and thus the color of the photons emitted by the quantum dot change. Although the changes are not particularly large, sensitive microscopes with very stable lasers – specifically developed in Basel for such measurements – are capable of precise detection of the wavelength changes. The researchers can use the shifted wavelengths to detect the motion of the wire with a sensitivity of only 100 femtometers. They expect that by exciting the quantum dot with a laser, the oscillation of the nanowire can be increased or decreased as desired.

“We are particularly fascinated by the fact that a link between objects of such different sizes is possible,” says Warburton. There are also various potential applications for this mutual coupling. “For example, we can use these coupled nanowires as sensitive sensors to analyze electrical or magnetic fields,” explains Poggio, who is investigating the possible applications with his team. “It may also be possible to place several quantum dots on the nanowire, to use the motion to link them together and so pass on quantum information,” adds Warburton, whose group focuses on the diverse use of quantum dots in photonics.

Quantum dots are nanocrystals, and are also known as artificial atoms because they behave similarly to atoms. With a typical extent of 10 to 100 nanometers, they are significantly larger than actual atoms. Their size and shape, as well as the number of electrons, can vary. The electrons’ freedom of movement in the quantum dots is significantly restricted; the resulting quantum effects give them very special optical, magnetic and electrical properties. For example, quantum dots are able to emit individual light particles (photons) after excitation, which can then be detected using a tailor-made laser microscope.