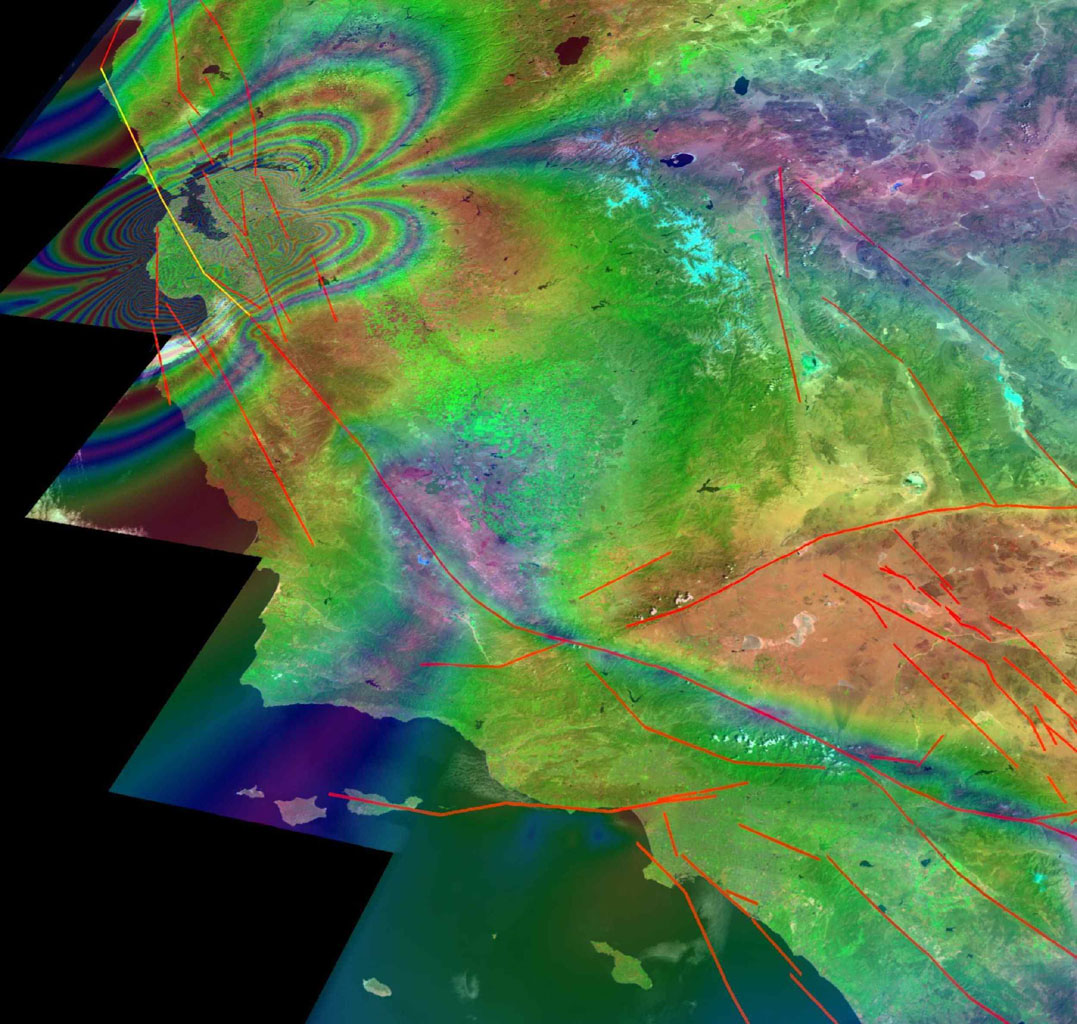 The San Francisco section of the San Andreas fault has a 25 percent change of a magnitude 7 or greater earthquake in the next 20 years, according to the computer simulation depicted in the above illustration. The colored patterns show projected seismic deformations associated with a model earthquake. (Image Credit: NASA/JPL/UC Davis)

Most people can’t detect an earthquake until the ground under their feet is already shaking or sliding, leaving little time to prepare or take shelter.

Scientists are trying to short circuit that surprise using the critical time window during the spread of seismic waves out from a temblor’s hypocenter—an earthquake’s underground point of origin.

With a speedy warning, government agencies, transportation officials and energy companies could halt trains and shut off power lines to mitigate damage—and give people a chance to brace themselves.

“The further you are from where an earthquake starts, the more time you have,” said Zachary Ross, postdoctoral scholar at Caltech Seismological Laboratory. “Having an extra 10 seconds might be really useful for preventing devastation.”

Typical detection systems take about a minute to send an earthquake alert. “The system will wait until all the data has come in and seismic waves have traveled across the whole network before making a final decision,” Ross said.

Early warning systems that send out an alert within seconds are difficult to develop because there’s a limited amount of data available for seismologists to make a decision.

With more time and data from multiple sensors, it’s easier for scientists to rule out false positives caused by nearby construction or traffic, or major earthquakes occurring halfway across the globe.

Using three NVIDIA GPUs and a labeled database of more than 250,000 Southern California earthquakes, Ross is developing neural networks to analyze seismograms, which are records of ground motion taken by a sensor.

One of his deep learning models uses convolutional neural networks to look at a single sensor at a time to identify seismic waves, narrowing down the sensor’s datastream to a handful of discrete times with seismic activity.

A second model, a recurrent neural network, recognizes wave patterns from several sensors over the course of a seismic event. The system unscrambles events that include multiple earthquakes in quick succession, and can reduce false triggers by a factor of 100—greatly improving the reliability for early warning systems.

“The models show that the first-order characteristics of seismic waves are the same just about everywhere,” he said. “We were able to take a model trained entirely on Southern California earthquake data and apply it to Japan without retraining at all. That was not a capability that we had before.”

Deep learning can also help recognize small earthquakes, 90 percent of which are missed by existing signals, Ross said. By better capturing earthquakes of all sizes, AI can help researchers like Ross better understand the physics of earthquakes and faults.

“The large events tend to occur once every several hundred years or few thousand years, which is much longer than the record we have,” he said. “There’s hope that by using these smaller, more frequent earthquakes we can learn something about the general science behind the problem that we couldn’t get otherwise.”