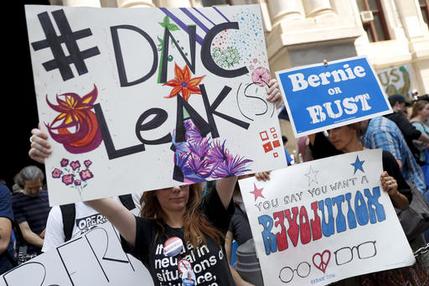 Demonstrators make their way around downtown, Monday, July 25, 2016, in Philadelphia, during the first day of the Democratic National Convention. On Sunday, Debbie Wasserman Schultz, D-Fla., announced she would step down as DNC chairwoman at the end of the party’s convention, after some of the 19,000 emails, presumably stolen from the DNC by hackers, were posted to the website Wikileaks. (AP Photo/John Minchillo)

First came the hack, then the leak. Now, the Clinton and Trump campaigns are fighting over Russia’s role in the release of thousands of internal Democratic National Committee emails.

At least one thing is clear: The email uproar is an unwelcome distraction at the launch of the Democratic National Convention, inflaming the rift between supporters of Hillary Clinton and primary rival Bernie Sanders just when the party was hoping to close it.

As the Philadelphia convention got underway Monday, developments in the email story rolled out in rapid sequence:

Clinton’s campaign, citing a cybersecurity firm hired to investigate the leak, blamed Russia for hacking the party’s computers and suggested the goal was to benefit Donald Trump’s campaign.

Trump dismissed that idea as laughable, tweeting: “The new joke in town is that Russia leaked the disastrous DNC e-mails.”

Sanders supporters certainly weren’t amused. Irate, in fact, that the emails confirmed their long-held suspicions the party had favored Clinton all along.

The FBI announced Monday it was investigating how the hack occurred, saying “a compromise of this nature is something we take very seriously.”

Michael Buratowski, a cyber analyst with the firm that investigated the hack, said his near-certainty that Russia was to blame was based on evidence such as the hackers using Russian internet addresses, Russian language keyboards, and the time codes corresponding to business hours in Russia, as well as the sophistication of the hack.

A look at the hack, the leak and the politics of the DNC email fracas:

Democrats have known about the hack since April, when party officials discovered malicious software on their computers.

They called in a cybersecurity firm, CrowdStrike, which found traces of at least two sophisticated hacking groups on the Democrats’ network, both with ties to the Russian government.

Those hacks vacuumed up at least a year’s worth of chats, emails and research on Trump, according to a person knowledgeable about the breach who wasn’t authorized to discuss it publicly.

The party publicly acknowledged the hack in June.

On Friday, the public got its first look at DNC emails when Wikileaks posted a cache of 19,000 internal communications, including some that suggested party officials had favored Clinton over rival Sanders during the primaries.

Was it from the Russians?

Whatever the source, the fallout from the leaked emails was swift and dramatic.

Democratic Party chairwoman Debbie Wasserman Schultz resigned over the weekend after Sanders’ campaign pounced on a number of leaked emails that they said showed that party officials had favored Clinton during the primaries.

The disclosure set off devoted Sanders supporters, who were already having a hard time moving past the bitter primary battles to embrace Clinton as the nominee.

Sanders told his delegates Monday that Wasserman Schultz’s departure would “open the doors of the party to people who want real change.” But even after Sanders urged his supporters to back Clinton, some were flashing thumbs-down signals and waving signs that said, “not Hillary, not Trump.”

The email controversy raised new questions about Trump’s foreign policy views with regard to Russia.

Clinton campaign chairman John Podesta suggested there was “a kind of bromance going on” between Russian President Vladimir Putin and Trump. Or “maybe it’s simply just a mutual admiration society,” he told MSNBC.

The Clinton campaign says Russia favors Trump’s views, especially on NATO. Trump himself has spoken favorably about Putin as someone he could negotiate with.

Trump supporters did succeed in preventing a reference to arming Ukraine from getting into this year’s platform, but the document is far from pro-Russia. It accuses the Kremlin of eroding the “personal liberty and fundamental rights” of the Russian people.

Clinton loyalists were eager to put a period on the latest email episode. Virginia Gov. Terry McAuliffe, a former chairman of the Democratic Party, said Monday “we’re done” with the controversy. But Sanders’ delegates didn’t seem ready to move on. And there may be more shoes to drop: Director of National Intelligence James Clapper has said U.S. officials expect more cyber threats against the campaigns.

Clinton just can’t stay out of hot water when it comes to email. The latest controversy serves as an unwelcome reminder of Clinton’s earlier problems with her handling of classified email as secretary of state. In case anyone failed to make the connection, Trump was happy to tweet a reminder: “Here we go again with another Clinton scandal, and e-mails yet (can you believe).”