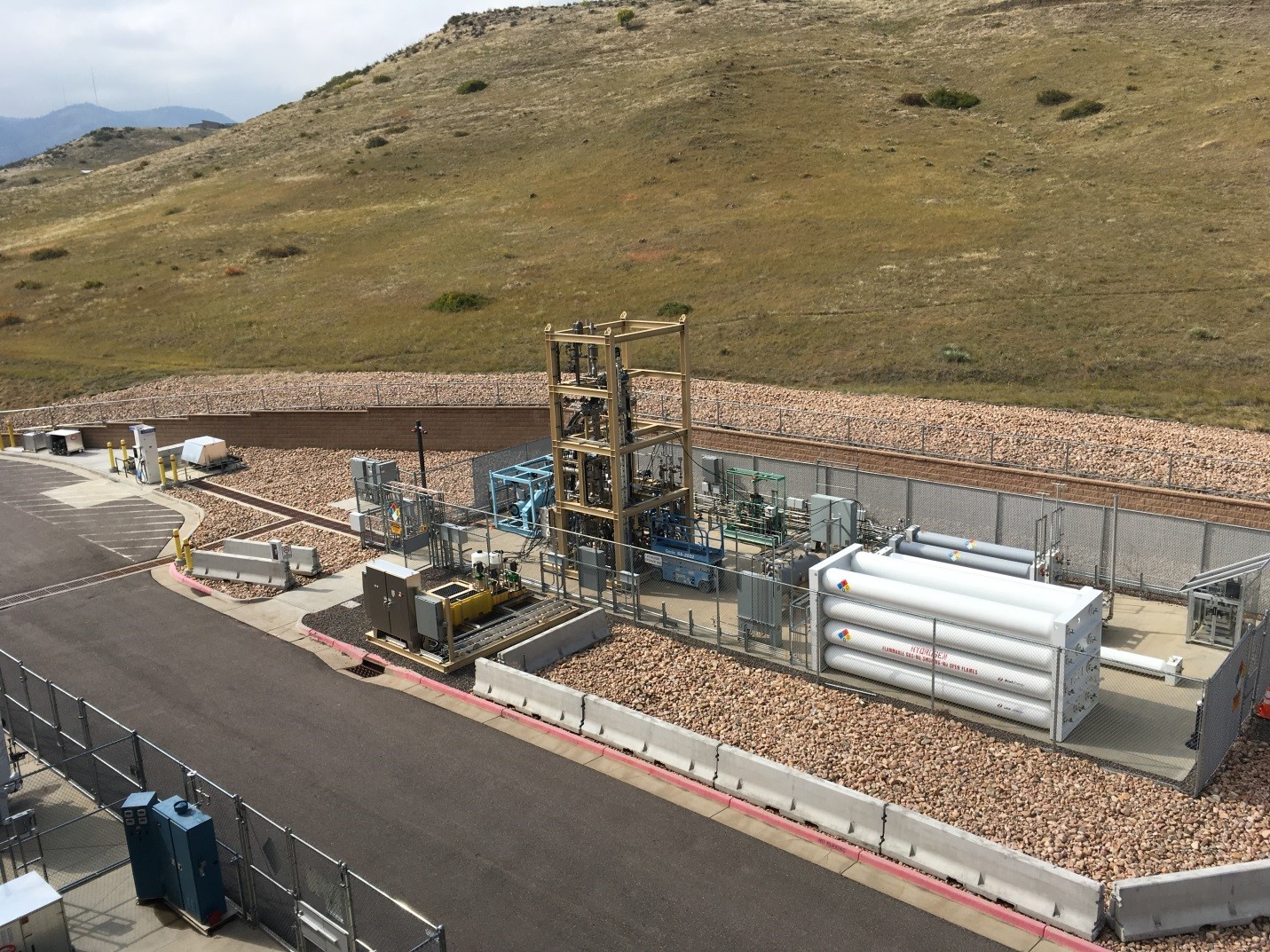 Over the past several decades, technological advancements and cost reductions have dramatically changed the economic potential of hydrogen in our energy system. Fuel cell electric vehicles are now available for commercial sale and hydrogen stations are open to the public (more than 2,000 fuel cell vehicles are on the road and more than 30 fueling stations are open to the public in California). Low-cost wind and solar power are quickly changing the power generation landscape and creating a need for technologies that enhance the flexibility of the grid in the mid- to long-term.

The vision of a clean, sustainable energy system with hydrogen serving as the critical centerpiece is the focus of H2@Scale, a major initiative involving multiple U.S. Department of Energy (DOE) program offices, led by DOE’s Fuel Cell Technologies Office in the Office of Energy Efficiency and Renewable Energy, and 14 DOE national laboratories. H2@Scale expands the focus of hydrogen technologies beyond power generation and transportation, to grid services and industrial processes that use hydrogen.

The Energy Systems Integration Facility (ESIF) at the National Renewable Energy Laboratory (NREL) serves as a world-class, sophisticated testbed to evaluate and advance the H2@Scale concept. The ESIF is a DOE user facility interacting with multiple industrial stakeholders to accelerate the adoption of clean energy, including hydrogen-based technologies. Many of the barriers for making the H2@Scale vision a reality are being addressed today within ESIF by NREL researchers along with other industrial and national laboratory collaborators. The unique testbed capabilities at NREL and collaborating national labs are now available for use by industry and several partnerships are currently in development.

Within the ESIF, NREL researchers use electrons and water to produce hydrogen at rates of up to 100 kg/day (enough to fuel ~6,000 miles of travel in today’s fuel cell electric vehicles or more than 20 cars) with plans to expand capacity to four times this level. The hydrogen produced is compressed and stored in the 350 kg of on-site storage available at pressures as high as 12,500 psi. The hydrogen is used in multiple applications at the ESIF, including fueling fuel cell electric vehicles, testing and validating hydrogen infrastructure components and systems, producing renewable natural gas (through biological reaction with carbon dioxide), and as a feedstock for fuel cell power generation and research and development efforts.

To accelerate the H2@Scale concept, the cost, performance, and durability of hydrogen production, infrastructure (distribution and storage), and end use technologies need to be improved. NREL researchers, along with other labs, are actively demonstrating and advancing hydrogen technology in a number of areas including low-temperature electrolysis, biological production of renewable natural gas, and infrastructure.

Today’s small-scale electrolysis systems are capable of producing several kilograms (kg) of hydrogen per day, but can cost as much as $10 per watt. At larger scale, megawatt (MW) systems producing more than 400 kg per day can cost under $2 per watt. However, for low-temperature electrolyzer systems to compete with the established steam methane reforming process for hydrogen production, the capital cost needs to be reduced to far below $1 per watt.

NREL has ongoing collaborations with Idaho National Laboratory (INL) to demonstrate control of a 250-kW electrolyzer system in a real-time grid simulation using a hardware-in-the-loop (HIL)-based approach to verify the performance of electrolyzer systems in providing grid support. HIL couples modeling and hardware in real-time simulations to better understand the performance of complex systems. The electrolyzer system, a building block for megawatt-scale deployment, was remotely controlled based on simulations of signals from a power grid. NREL and INL engineers demonstrated the ability of an electrolyzer to respond to grid signals in sub-seconds, making electrolyzers a viable candidate for “demand response” technologies that help control frequency and voltage on the grid by adjusting their power intake based on grid signals. A key enabler of low-cost electrolysis will be for electrolyzer technologies to respond dynamically to grid signals, such that they access low-cost power when available. The potential performance and durability implications of such dynamic operation are being elucidated in ongoing tests. Such experiments are essential to assess the potential for electrolyzers to support grid resiliency and to identify remaining R&D needs toward this value proposition.

NREL’s scientists are developing and exploring new materials for electrolysis systems, including advanced catalysts based on nanowire architecture and alkaline membranes, and approaches for integrating these materials into low-cost, durable membrane electrode assemblies.

Energy storage through the biological production of renewable natural gas

NREL and Southern California Gas Company are evaluating a promising “power-to-gas” concept, wherein methane is produced from renewable hydrogen and carbon dioxide through a biological process and then stored and transmitted through the expansive natural gas infrastructure. This approach has the potential to change how the power industry approaches renewable electricity generation and energy storage. The process involves using a low-temperature water electrolyzer to produce hydrogen from intermittent power generators (e.g., wind and solar), and then feeding the hydrogen and carbon dioxide into a bioreactor where single-celled methanogens produce methane, heat, and water. With only minor cleanup to meet pipeline quality, the product gas from the bioreactor can be injected into the existing natural gas infrastructure. NREL is characterizing the system performance to assess the commercial viability of the biological methanation approach relative to other energy storage technologies and determine approaches for megawatt-scale system designs.

Other technologies in development at NREL include using anaerobic gas fermentation as a building block for agricultural products (essential amino acids), and bioconversion of renewable hydrogen and carbon dioxide to produce a wide variety of high value products such as polymers, lubricants, and other food intermediates.

Commercial hydrogen fueling stations for mobile fuel cell applications—like passenger vehicles, buses, trucks, and forklifts— have very recently become available in the United States, but they are currently limited to certain geographic regions. Wide-scale expansion of infrastructure throughout the country to keep pace with growth will be necessary for growth of the hydrogen fuel cell vehicle industry.

NREL’s Hydrogen Infrastructure Testing and Research Facility (HITRF) at the ESIF combines renewable hydrogen production, compression, storage, and dispensing into a unified system for fueling vehicles and innovating hydrogen infrastructure components and systems. The HITRF integrates commercial and pre-commercial equipment in a system that mimics current and future hydrogen stations, and it is the only facility in the national lab complex capable of fueling to the SAE J2601 standard—a fast-fueling protocol that dispenses 70 MPa hydrogen at -40°C to the vehicle with a 3–5 minute fueling time.

NREL and its partners use the HITRF to address technical hydrogen infrastructure challenges to help reduce the cost and time of new hydrogen fueling station construction, improve the stations’ availability and reliability, and ensure the success of future hydrogen infrastructure deployment. NREL’s data-driven results help guide R&D direction and safety standards and codes development, and improve the public knowledge of hydrogen station costs and operating requirements.

In the past two years, the HITRF has generated more than one ton of hydrogen to support the Energy Department’s Hydrogen Fueling Infrastructure Research and Station Technology (H2FIRST) project and other infrastructure and fuel cell projects. Approximately 417 kg went to SAE J2601 fills, and 683 kg to other research.