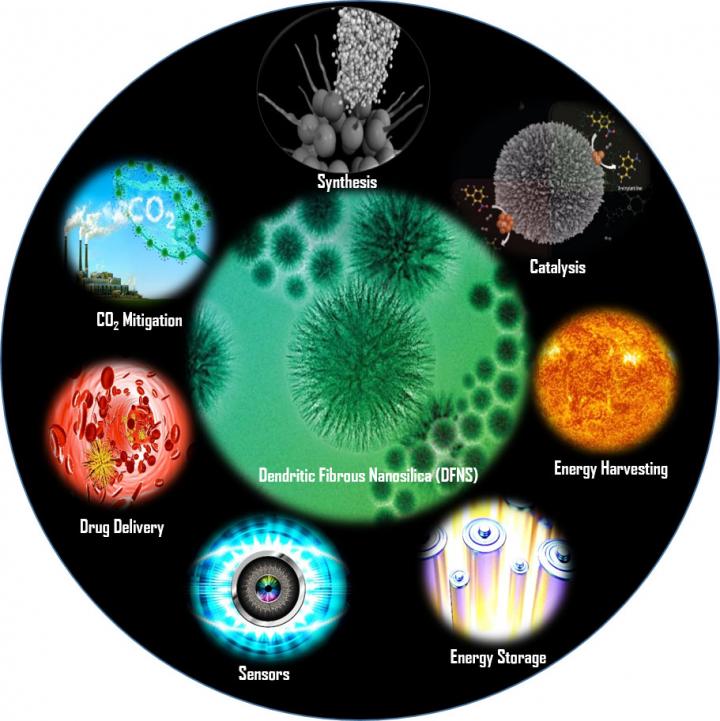 Dendritic fibrous nanosilica (DFNS), also known as KCC-1, has a unique fibrous morphology and a high surface area with improved accessibility to the internal surface, tunable pore size and volume, controllable particle size, which made it useful in the fields of energy, environment, and health. Credit: Ayan Maity, Vivek Polshettiwar

Dendritic fibrous nanosilica (DFNS) attracted a great deal of attention in a large number of scientific disciplines such as catalysis, solar energy harvesting (photocatalysis, solar cells, etc.), energy storage, self-cleaning antireflective coatings, surface plasmon resonance (SPR)-based ultra-sensitive sensors, CO2 capture, and biomedical applications (drug delivery, protein and gene delivery, bioimaging, photothermal ablation, Ayurvedic and radiotherapeutics drug delivery, etc.). As discussed in this review, the unique fibrous morphology of the DFNS family of materials bestows them with several important properties that were brilliantly exploited for use in a range of applications. The fibers of DFNS were functionalized with a range of organic groups, ionic liquids, organometallic complexes, polymers, peptides, enzymes, DNA, genes, etc. They were also loaded with metal nanoparticles, bi-metallic nanoparticles, even with single atoms of metals, quantum dots, and metal oxides and hydroxides. They were also used as hard templates for the synthesis of high surface area carbon with fibrous morphology. DFNS-based zeolites were also synthesized with unique activities.

DFNS provided a means to load large amount of catalytic active sites with exceptionally high accessibility compared to conventional mesoporous silica materials. Additionally, due to the radially oriented pores (channels), the size of which increased from the center of the sphere to its outer surface, reactants were able to easily access active sites within the channels, increasing their interaction with catalytic sites. This led to a multifold increase in their catalytic activity.

DFNS was cleverly used to develop novel photocatalysts by coating with g-C3N4 and TiO2. The fibrous morphology of DFNS not only facilitated mass transfer and improved accessibility but also facilitated the formation of a uniform conformal coating and a high loading of semiconductors and guest molecules. Notably, due to the fibrous structure of the material, the light harvesting properties of the catalyst were enhanced due multiple scattering effects and the reflection of a large amount of incident light. DFNS was also used to improve the performance of dye sensitized solar cells (DSSCs). In addition to energy harvesting, DFNS-coated carbon spheres were also used for energy storage using supercapacitors.

Functionalized DFNS, such as DFNS-amines and DFNS-oxynitrides, were successfully used to develop efficient CO2 sorbents, which could contribute in tackling the potentially dangerous climate change issue. Functionalized DFNS was also used to remove pollutants such as toxic metal ions, phosphorus, polyaromatic hydrocarbons, etc. from water bodies, which is a serious environmental concern.

DFFNS was efficiently used to deliver various anti-cancer drugs, and even the delivery of the Ayurvedic drug curcumin, DNA, genes and antimicrobial enzymes was achieved. In addition, a number of auxiliary functions were integrated into DFNS, such as stimuli responsiveness (light to thermal), fluorescence, radioactivity, anti-reflectance, superhydrophobicity, etc. This allows for their application in photothermal ablation therapy, real-time bioimaging, self-cleaning coatings, etc.

The sensing and quantification of pollutants was achieved using DFNS-based surface plasmon resonance (SPR). It was also used for an ultrasensitive enzyme-linked immunosorbent assay (ELISA+) with a 2000-fold enhancement in detection sensitivity.

DFNS seems like All-in-one-Nanomaterial and have huge potential for future development. Although DFNS has been gifted with excellent textural, physical and chemical properties and shows exceptional results in various applications, the evolution of DFNS from fundamental research studies in the laboratory to being used in industry will depend on collaborations between academic researchers and industry.

Thus, remarkable advances in the synthesis and applications of DFNS were achieved, and DFNS seems to have demonstrated great potential as a superior alternative to conventional silica materials such as Stöber silica, MSN, MCM-41, and SBA-15, among others. The low cost, high activity and pronounced stability of numerous dendritic fibrous nanosilica-based materials support our argument that this class of material will find practical use for a range of applications, from catalysis, to gas capture, from energy harvesting and storage to drug delivery, from analytical chemistry to environmental remediation and more.