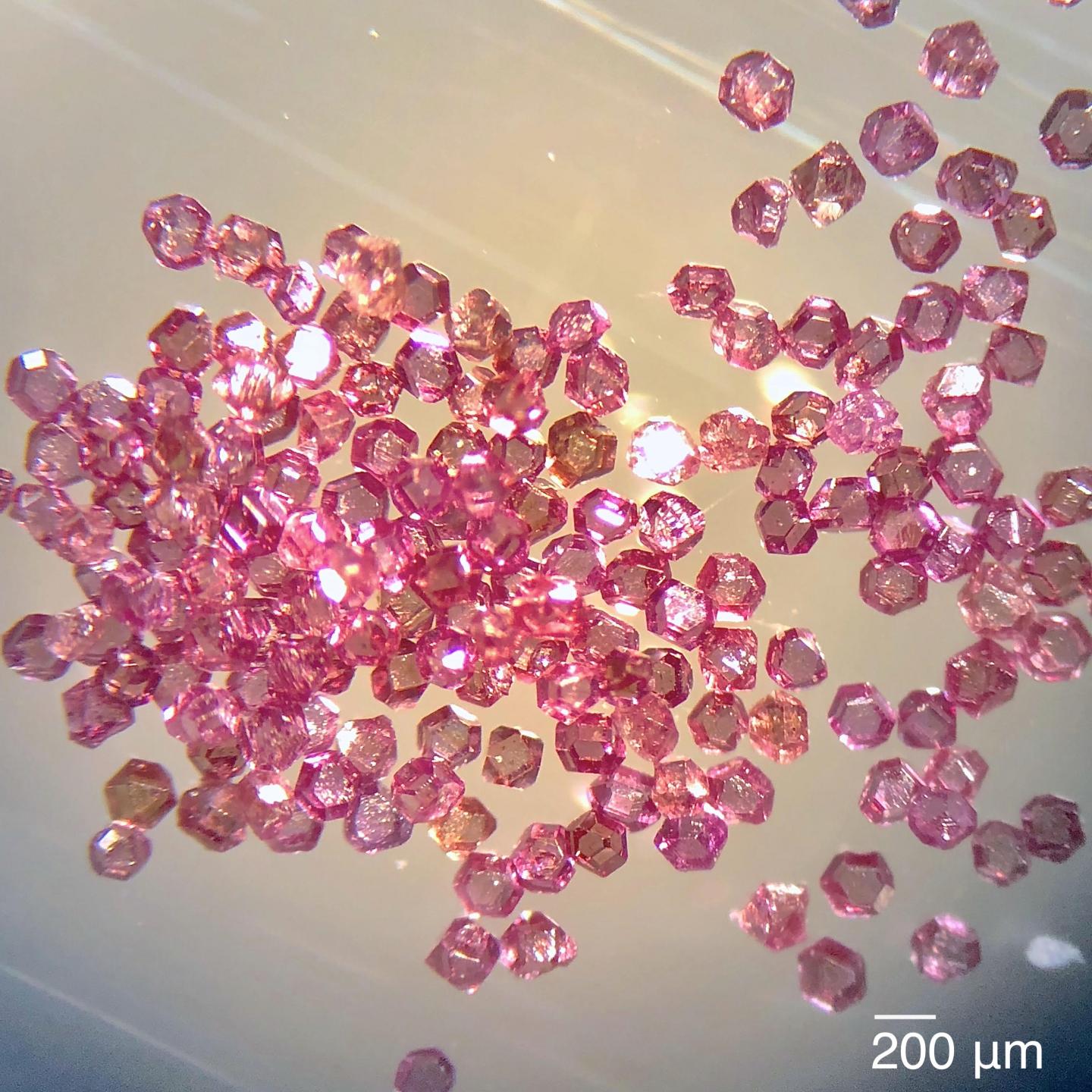 A microscopic image of diamond particles with nitrogen-vacancy defects. These samples, which exhibit a truncated octahedral shape, were used in experiments that sought new ways to tune and control an electronic property known as spin polarization. The scale bar at lower right is 200 microns (millionths of an inch). To the human eye, the pinkish diamonds resemble fine red sand. Credit: Berkeley Lab, UC Berkeley

It may sound contradictory, but diamonds are the key to a new technique that could provide a very-low-cost alternative to multimillion-dollar medical imaging and drug-discovery devices.

An international team led by scientists at the Department of Energy’s Lawrence Berkeley National Laboratory (Berkeley Lab) and UC Berkeley discovered how to exploit defects in nanoscale and microscale diamonds and potentially enhance the sensitivity of magnetic resonance imaging (MRI) and nuclear magnetic resonance (NMR) systems while eliminating the need for their costly and bulky superconducting magnets.

“This has been a longstanding unsolved problem in our field, and we were able to find a way to overcome it and to show that the solution is very simple,” said Ashok Ajoy, a postdoctoral researcher in the Materials Sciences Division at Berkeley Lab, and the Department of Chemistry at UC Berkeley, who served as the lead author of the study. “No one has ever done this before. The mechanism that we discovered is completely new.”

MRI machines are employed to locate cancerous tumors and aid in the development of treatment plans, while NMR machines are used to examine the atomic-scale structure and chemistry of drug compounds and other molecules.

The new technique, described in the May 18 edition of the Science Advances journal, could lead to the direct use of these tiny diamonds for rapid and enhanced biological imaging. Researchers will also seek to transfer this special tuning, known as spin polarization, to a harmless fluid such as water, and to inject the fluid into a patient for faster MRI scans. The high surface area of the tiny particles is key in this effort, researchers noted.

Enhancing this spin polarization in the electrons of the diamonds’ atoms can be likened to switching the direction of some compass needles facing in many different to the same direction. These “hyperpolarized” spins could provide a sharper contrast for imaging than conventional superconducting magnets.

“This important discovery in the hyperpolarization of nano- and microscale diamonds has enormous scientific and commercial implications,” Ajoy said, as some of the most advanced MRI and NMR machines can be incredibly expensive and out of reach for some hospitals and research institutions.

“This could help expand the market for MRI and NMR,” he said, and could also potentially shrink the devices from room-sized to benchtop-sized, which “has been the dream from the start.” Ajoy is a member of the Alex Pines research lab at UC Berkeley – Pines is a senior faculty scientist in Berkeley Lab’s Materials Sciences Division, and a pioneer in the development of NMR as a research tool.

Scientists had struggled to overcome a problem in properly orienting the diamonds to achieve a more uniform spin polarization – and this problem was even more pronounced in collections of very small diamonds that presented a chaotic jumble of orientations. Earlier efforts, for example, had explored whether drilling tiny features into diamond samples could aid in controlling their spin polarization.

The tunable spin properties in diamonds with defects known as nitrogen vacancies – in which nitrogen atoms take the place of carbon atoms in the crystal structure of diamonds – have also been studied for potential use in quantum computing. In those applications, scientists seek to control the spin polarization of electrons as a way to transmit and store information like the ones and zeros in more conventional magnetic computer data storage.

In the latest study, scientists found that by zapping a collection of microscale diamonds with green laser light, subjecting it to a weak magnetic field, and sweeping across the sample with a microwave source, they could enhance this controllable spin polarization property in the diamonds by hundreds of times compared with conventional MRI and NMR machines.

Emanuel Druga, an electrician in the UC Berkeley College of Chemistry R&D shops, devised a large measurement tool for the new technique that proved instrumental in confirming and fine-tuning the spin polarization properties of the diamond samples. “It allowed us to debug this in about a week,” Ajoy said.

The device helped researchers to home in on a good size for the diamond crystals. At first, they were using crystals that measured about 100 microns, or 100 millionths of an inch across. The tiny samples of pinkish diamonds resemble fine red sand. After testing, they found that diamonds measuring about 1 to 5 microns performed about twice as well.

The tiny diamonds can be manufactured in economical processes by converting graphite into diamond, for example.

The team of scientists has already developed a miniaturized system that uses off-the-shelf components to produce the laser light, microwave energy, and magnetic field required to produce the spin polarization in the diamond samples, and they have applied for patents on the technique and the hyperpolarization system.

“You could think of retrofitting existing NMR magnets with one of these systems,” said Raffi Nazaryan, who participated in the study as an undergraduate researcher at Berkeley Lab and UC Berkeley. Prototypes of the system cost just several thousand dollars, he noted.

While the spin is short-lived, researchers said they are exploring ways to continuously polarize the samples, and are also researching how to transfer this polarization to liquids. Ajoy said, “We could potentially recycle the liquid so it flows in a closed loop, or keep injecting newly polarized liquid.”