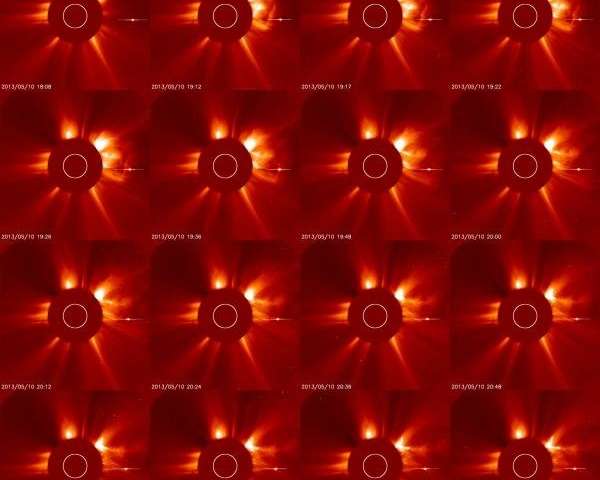 In the image above, Mercury is seen as the bright dot on the right; the MESSENGER spacecraft was orbiting it. Radio signals from MESSENGER probed the near-solar environment observed. Credit: Tom and Elizabeth Kuiper, (JPL/STAR Prep Academy)

“The most powerful CMEs may travel at 2,000 kilometers per second, passing the Earth in seconds. We have discovered reconnection regions trailing behind a CME traveling 750 kilometers per second,” Jensen said. “This suggests that the impact of a CME on the Earth’s space weather consists of the initial shock from the CME and also secondary shocks from powerful electrical currents and accelerated plasmas trailing in the CME’s wake.”

These events can affect human activity and technology not only in space, but also within the atmosphere and ultimately on the ground, Jensen said. In 1989, a powerful CME caused problems in satellites orbiting the Earth, the space shuttle Discovery, and electric grids resulting with 6 million people in Canada losing power.

“These secondary regions trailing the CME front have never been seen before because we have had few opportunities to probe this area with spacecraft. The MESSENGER spacecraft orbiting Mercury on the other side of the Sun was in the right place at the right time to observe a CME safely by passing radio signals through it to the Earth,” said Jensen. “Understanding the three-dimensional structure of these eruptions that strike the Earth is essential to properly preparing for their potential effects.”